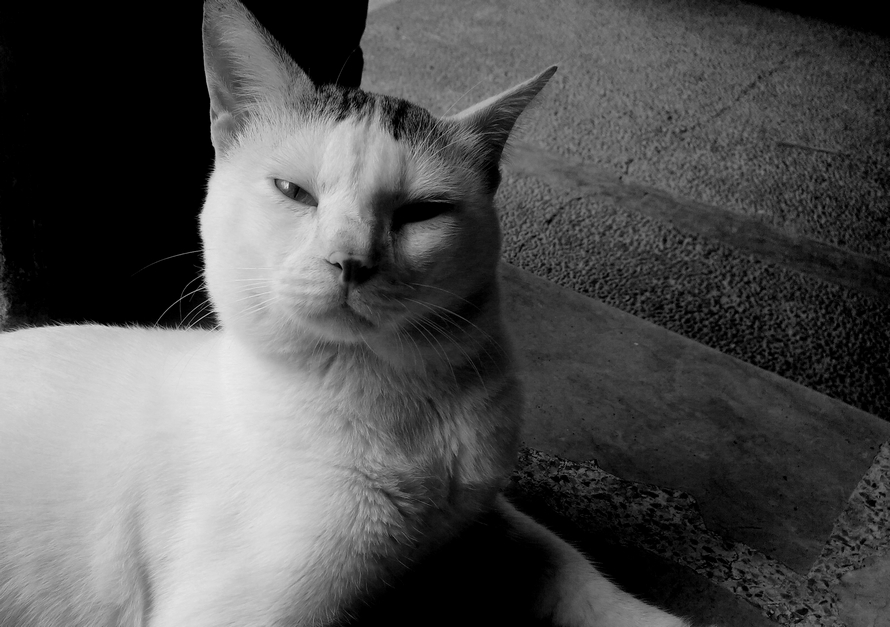 Of late, Frankie the Philosopher Cat, the smartest of our house cats, has been spending more time watching cable TV. It turns out that he has been closely following the US presidential campaign. Why would a cat be interested in American politics? Curious, Marine Café Blog decided to have a little chat with Frankie.

Marine Café Blog: You never were into politics. Why would you be interested in the 2016 US presidential race?
Frankie: Cats need to be entertained just like you humans. The pot calling the kettle black and vice versa. What can be more entertaining than that?

MCB: Anything else that interests you in the race to the White House?
Frankie: Well, I’m amused every time the two main contenders go at each other and tear logic to shreds. Sophistry, agrumentum ad hominem, and hasty generalisations… Bertrand Russell, the British philosopher, mathematician and logician, would probably have rolled on the floor laughing.

MCB: But isn’t the US presidential election a serious matter?
Frankie: I agree. Every time America farts, the whole world has to cover its nose. So, yes, it’s a very serious matter.

MCB: Which candidate catches your fancy?
Frankie: Donald J. Trump, and only because he calls a spade a spade, just like somebody I know (winks his eye). That doesn’t mean I would vote for him if I were a human and a US citizen.

MCB: Has any of Mr Trump’s policy pronouncements grabbed your attention?
Frankie: Only one — his “America First” declaration. If he puts America and not himself first, imagine what impact that would have on the US merchant fleet and US shipbuilding.

MCB: Be honest now. Are you sure weren’t promised a sumptuous dinner by certain people if you said something positive about the man?
Frankie: What do you think of me? A member of the press?

MCB: Let’s leave US politics and turn to a recent milestone in world shipping. They’ve just opened the new Panama Canal after a US$5.5 billion makeover that took a decade to finish. Take a look at the pictures of the new Canal. Aren’t you impressed? Aren’t you excited?
Frankie: Should I be? What difference will a darn canal have in the rights and working conditions of seamen?

MCB: Don’t be such a grouch. Everyone’s calling the new Panama Canal an engineering marvel.
Frankie: Well, let’s all pray that China’s economy will stay robust and keep producing cheap goods to fill up the Neo-Panamax ships traversing the Canal.

MCB: You seem to think that the fate of world shipping hinges on China.
Frankie: Why not? Just go to the malls. They’re overflowing with Chinese merchandise! I suspect Mr Trump himself has been tempted to buy some Chinese products. I wonder if Chinese noodles and dim sum are on the menu at his Trump Tower?

Check out MCB’s previous interview with Frankie the Philosopher Cat:

A cat’s view of Christmas and things maritime