A cat’s view of Christmas and things maritime 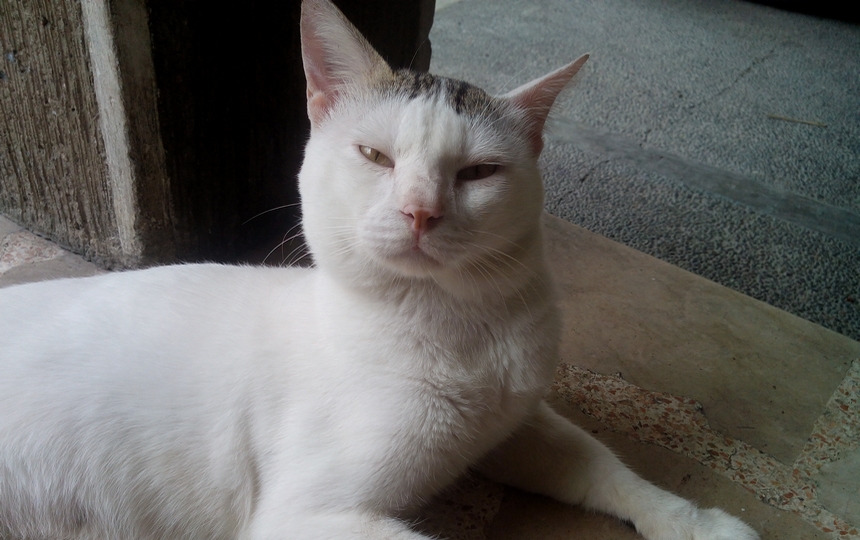 It’s been more than seven months since our last interview with Frankie the Philosopher Cat. What better time to chat with him again than at Christmastime in Manila? ‘Tis the season to be jolly – a time for brushing aside the problems which bedevil the maritime industry and make some folks age faster than they can make money.

Marine Café Blog: Christmas is in the air. Don’t you want to go out and join the merrymaking?
Frankie: No, thanks. I’d rather stay home and smell the flowers in the garden.

MCB: You remind me of Charles Dickens’ character in A Christmas Carol. Come on, don’t be such a curmudgeon. It’ll be fun.
Frankie: Haven’t you heard? Manila is the city with the worst traffic on earth. More so now with all the frenzied, mindless shopping. Besides, it’s hot and humid. Darn the climate change and global warming.

MCB: You believe in climate change? Many people, including some scientists, insist that there’s no such thing.
Frankie: Those folks are deluded. They should go live in Ethiopia, where there’s severe drought, or some island in the Pacific that could disappear from the map because of the rise in sea level.

MCB: The climate change summit in Paris has just agreed to limit the spike in global temperatures to less than 2 degrees Celsius. Aren’t you glad?
Frankie: The test of the pudding is in the eating. Let’s see how it is implemented. At least ILO Maritime Labour Convention, 2006, has the force of law. The deal agreed in Paris is partly legally binding and partly voluntary. It’s a mongrel!

MCB: Now that you’ve mentioned eating, I think you’ll miss some great party food if you don’t join the merrymaking.
Frankie: We cats are not as greedy as humans. In fact, we eat only when we’re hungry. But come to think of it, some pasta carbonara would be nice…

MCB: You seem to be the only one who doesn’t want to gad about and make merry this Christmas season.
Frankie: Are you kidding? Many seafarers are still deep in training this time of the year instead of drinking San Miguel beer or going to the malls. What a way to spend the holiday season after working your butt off at sea.

MCB: Well, they need to do what they need to do.
Frankie: You mean what they are forced to do. I pity those ship officers who are required to undergo both generic and type-specific training in ECDIS. Imagine the myriad of ECDIS manufacturers and the amount of training the chaps have to undergo and the cost of it all.

MCB: Wouldn’t it be wonderful if IMO could simplify the whole ECDIS regime?
Frankie: Dream on. IMO is in the business of promoting business and sustaining its own humongous bureaucracy. What has it done to help seafarers?

MCB: You seem to have a point there. But speaking of training requirements, don’t you think they’re necessary?
Frankie: What a silly question. The question you and the IMO folks should ask is why we’re not seeing an end to serious sea mishaps despite all those requirements.

MCB: Surely, there’s something to celebrate maritime-wise this Christmas?
Frankie: Let me think… freight rates are falling, the offshore sector is in the doldrums, the immediate future doesn’t look bright for mega container ships…

MCB: The Philippines remains No.1 in ship crewing. That’s a reason to rejoice, don’t you think?
Frankie: Fifty years from now, Filipinos will still be stuck with manning other nations’ fleets. Excuse me, I think I’ll hie off now to the garden and admire the flowers.