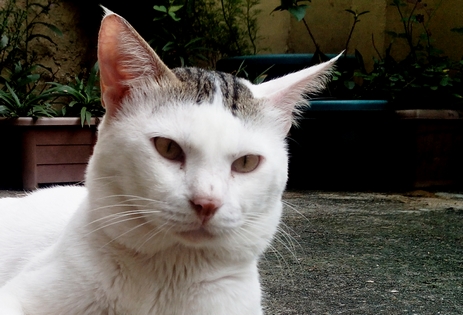 Frankie the Philosopher Cat has been grumpier than usual. And it isn’t because of the hot and humid weather this time of the year. He recently found out about the “white list” of 23 Philippine maritime schools with 41 others being left out in the cold. When Frankie is in a surly mood, he makes a whining sound that starts with a loud baritone and ends with a plaintive falsetto. It can be a bit bothersome, so we decided to have a talk with him.

Marine Café Blog: Aren’t you glad that the Philippine authorities are finally trying to reform the system and get rid of maritime diploma mills?
Frankie: I’m not sure that you can call it “reform”. It looks more like a shakedown to me.

MCB: Why do you say that?
Frankie: There were no criteria for selecting who would be included in the “white list” and who would be out.

MCB: And how do you know that?
Frankie: One of the blokes in charge told me. I think he had no choice but to be candid. Otherwise, I would have insisted on being shown the criteria — in black and white.

MCB: Doesn’t the Commission on Higher Education have what they call “outcomes based” assessment of the maritime schools?
Frankie: Huh. Those bureaucrats told the schools they were excluded from the “white list” because less than 30% of their students had taken the state licensure examinations in the past three years. They didn’t bother to check how many of the students actually passed!

MCB: You seem riled up by all this.
Frankie: Who wouldn’t be? Over the past several decades, the State allowed every Tom, Dick and Harry to open a maritime school, subject to periodic inspections, and now says only a handful can continue operating. The rest can go to hell.

MCB: But the schools you mention have been given the option to offer courses for ratings under the Enhanced Support Level Program (ESLP). So they don’t have to close shop.
Frankie: What an imbecilic scheme. Why produce more ratings when you have an oversupply of them? The market demand is for more qualified officers. Besides, the two-year associate nautical course was abolished half a century ago – precisely because the programme wasn’t attuned to the market.

MCB: Do you think some schools got the thumbs up because of their power and influence?
Frankie: I won’t answer that since your guess is as good as mine.

MCB: There have been no protests over what you suggest is a very flawed process.
Frankie: Of course, no one will dare complain to the media or file a court case. As the saying goes, if you’re a businessman, you can’t fight City Hall.

MCB: Where do you see this whole thing going?
Frankie: The regulators will do what they want. And what they’re doing may well please the European Maritime Safety Agency (EMSA) and prompt the EU to once again postpone any decision to derecognise Philippine crew certificates.

MCB: That would be a happy ending, don’t you think?
Frankie: Are you kidding? What about the tens of thousands of students who wanted to become ship officers and now find their schools excluded from the “white list”? Who sympathises with them and their parents?

MCB: It’s interesting that you use the word “symphatise”. I thought you were concerned only with getting KFC chicken for lunch and enjoying your siesta.
Frankie: There’s a time to rise above one’s own personal interests. By the way…it’s been a while since I had my KFC.

Lowering the boom on maritime schools