Like other Latin American countries, Chile has produced some brutal military dictators such as Augusto Pinochet. But it also a country of poets and painters. Two Chilean poets were awarded the Nobel Prize in Literature: Gabriela Mistral (in 1945) and Pablo Neruda (in 1971). There is no dearth of gifted painters either. The following is a small serving of marine paintings by Chilean artists. I hope you enjoy them as you would a cup of delicious coffee.

It is the liberator. It is the ocean,
far, there, in my homeland, that awaits me. 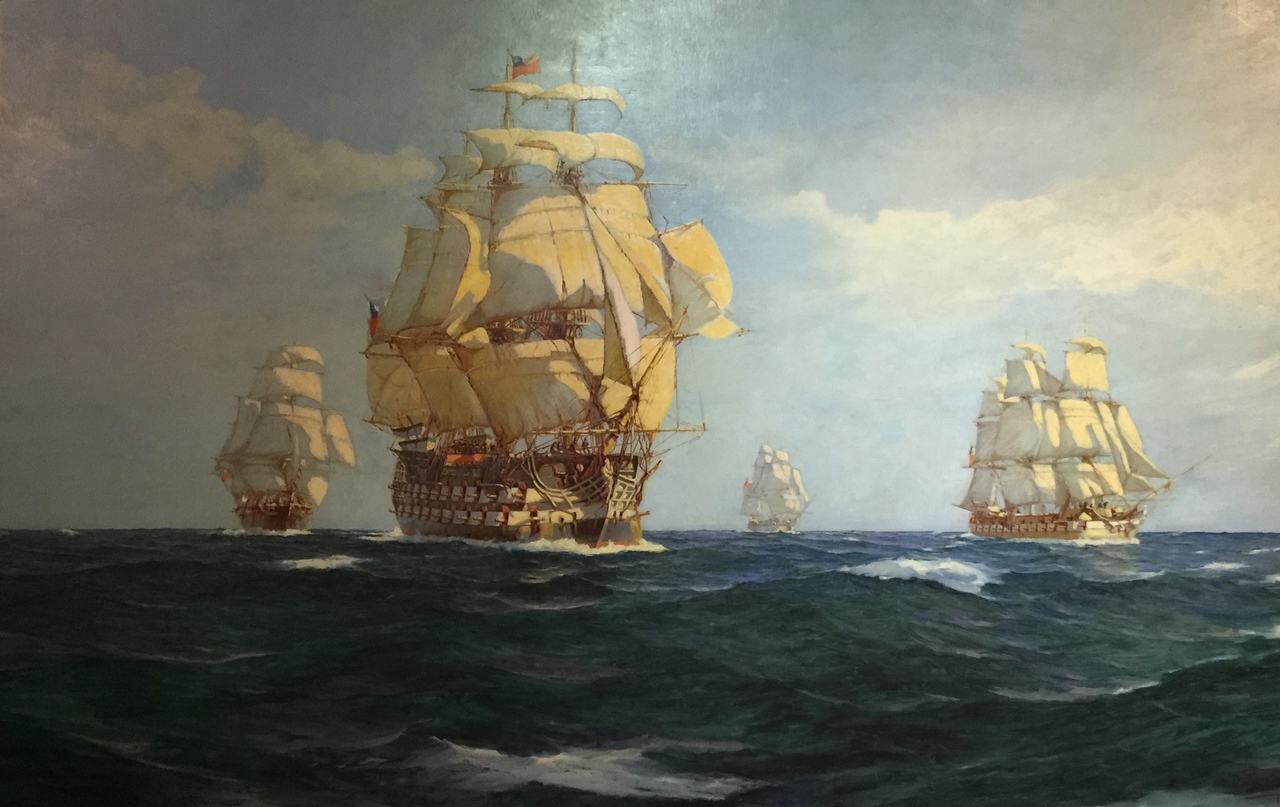 This resplendent work by Álvaro Casanova Zenteno — painter, diplomat and sailor — pays tribute to the glory of the Chilean navy. Zenteno must have felt a great sense of patriotic pride when he made this painting. What Chilean artist wouldn’t be? The First Chilean Navy Squadron had played a pivotal role in Chile’s war of independence against Spain. Read more about the Squadron here. 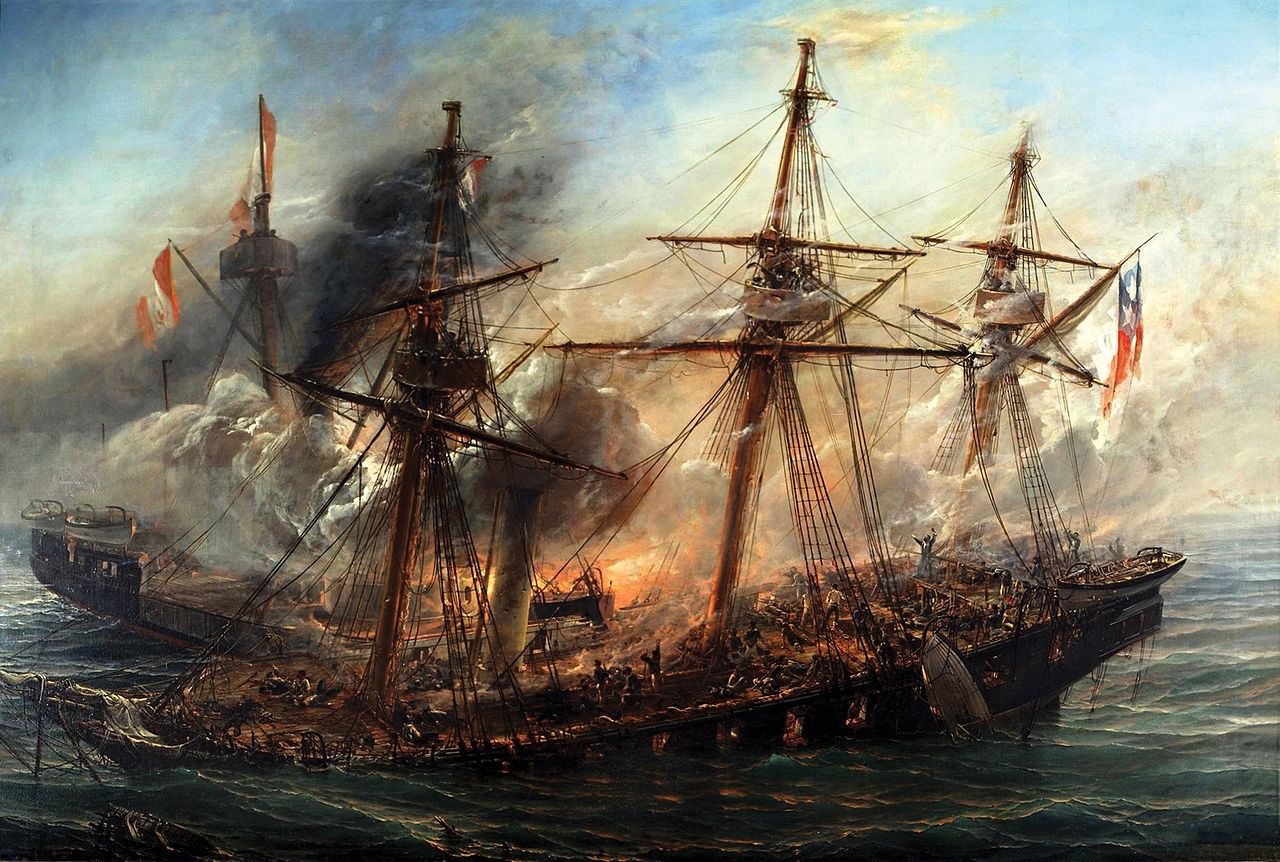 Thomas Jacques Somerscales was an English teacher, sailor, and landscape and marine painter. But according to the British art institution Tate: “He is also considered a Chilean painter as he began his career as an artist there. Many of his landscapes evoke the region and many of his marine paintings feature notable events in Chilean naval history and have become patriotic national icons in that country.” This stunning painting of a sea battle in Iquique in northern Chile is a testimony to Somerscales’ Chilean spirit.

Beautiful. Breathtaking. What else is there to say except that Eugenio Cruz Vargas was a poet aside from being a painter? 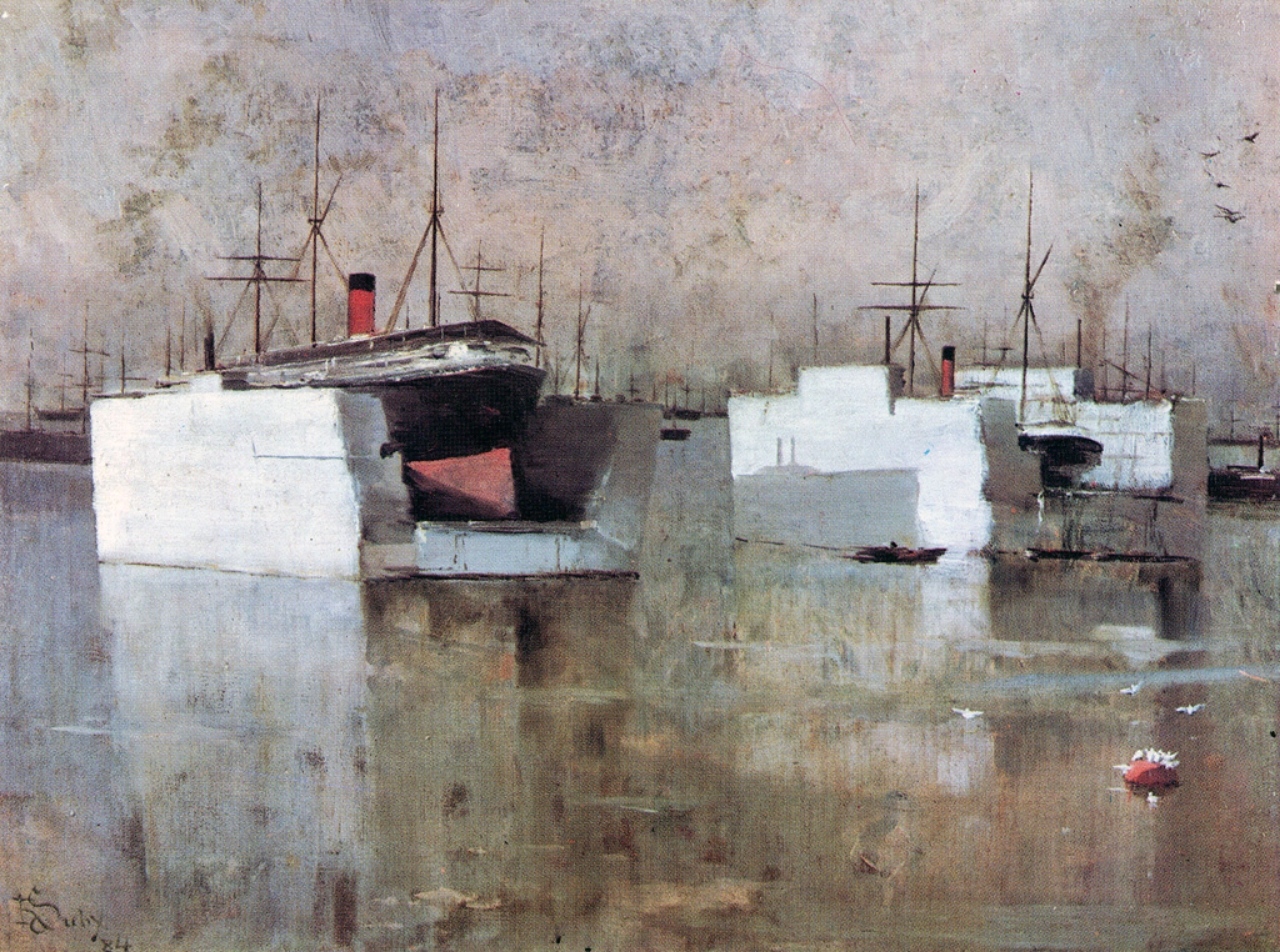 This realist painting by Chilean painter, politician and diplomat Ramón Vicuña will pique the viewer’s curiosity. The two ships are laid on floating repair docks. But the docks are painted white and look like giant styrofoam boxes. It is as though the vessels were being unboxed to partially reveal their hulls and superstructures. 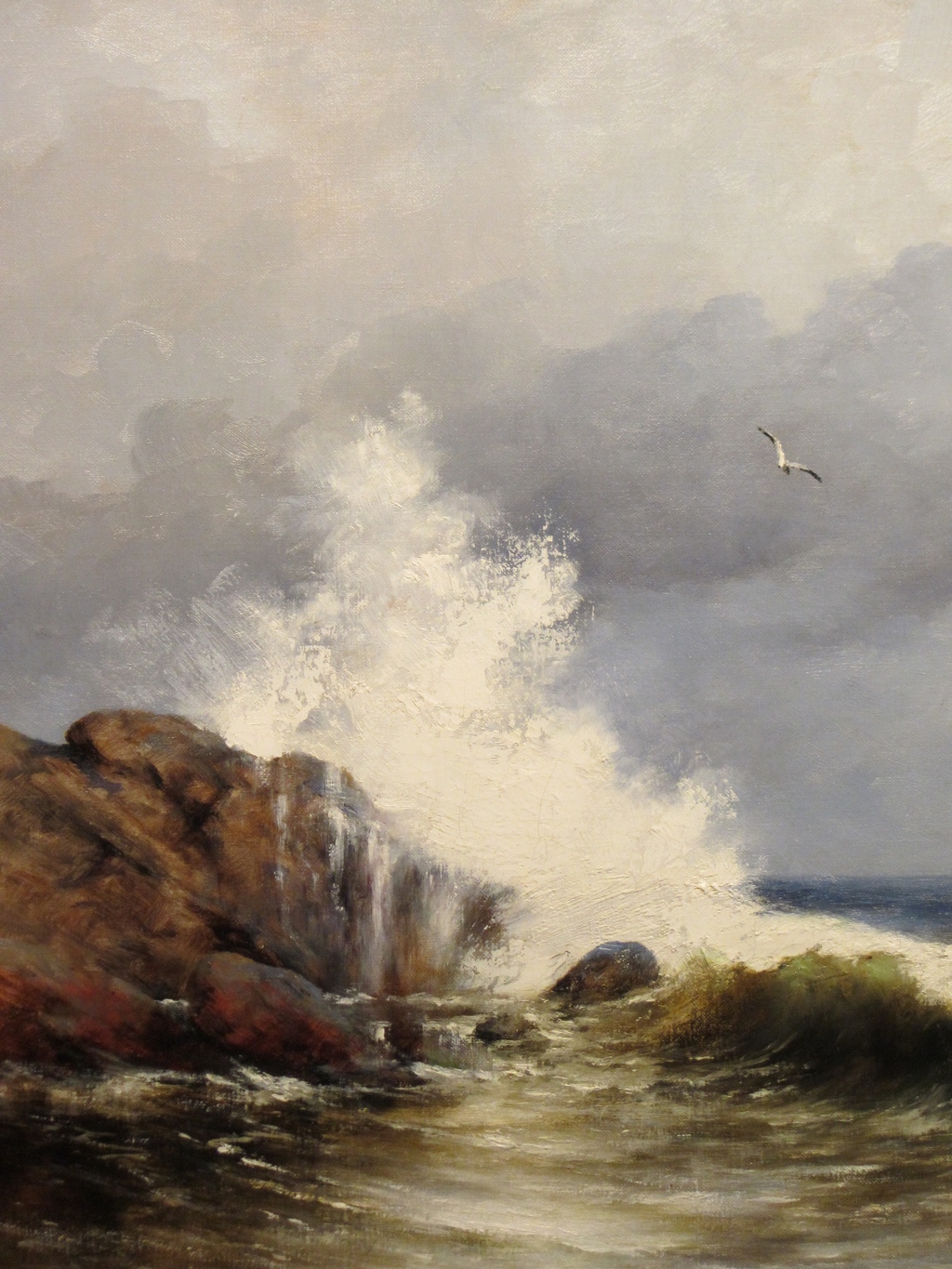 By painting this stormy scene at eye level, the artist has reinforced the height and might of the wave as it crashes against the rocks. The white spume rises as if rushing to merge with the clouds and be one with them. 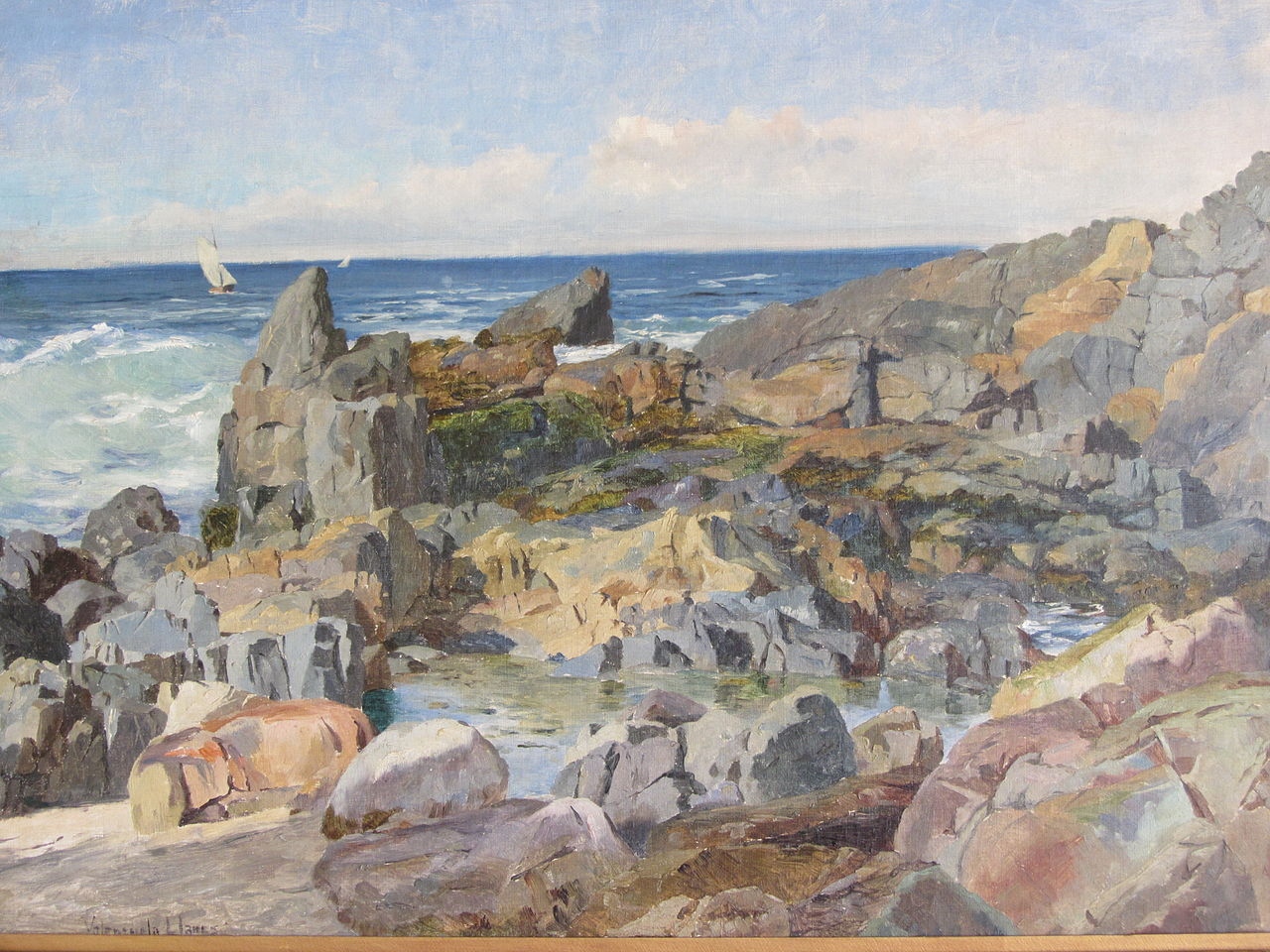 One of Chile’s greatest artists, Alberto Valenzuela Llanos shows his artistic gift in the way he renders the rocks and cliffs in so many shades of muted brown, grey and green. The craggy shore occupies most of the canvas and contrasts beautifully with the greyish blue sea in the background. It is a relaxing scene overall. 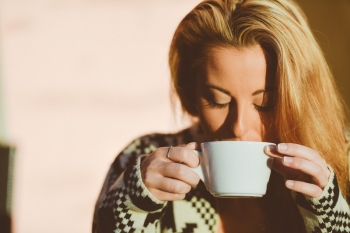