A deathless myth: Mermaids in poetry and art 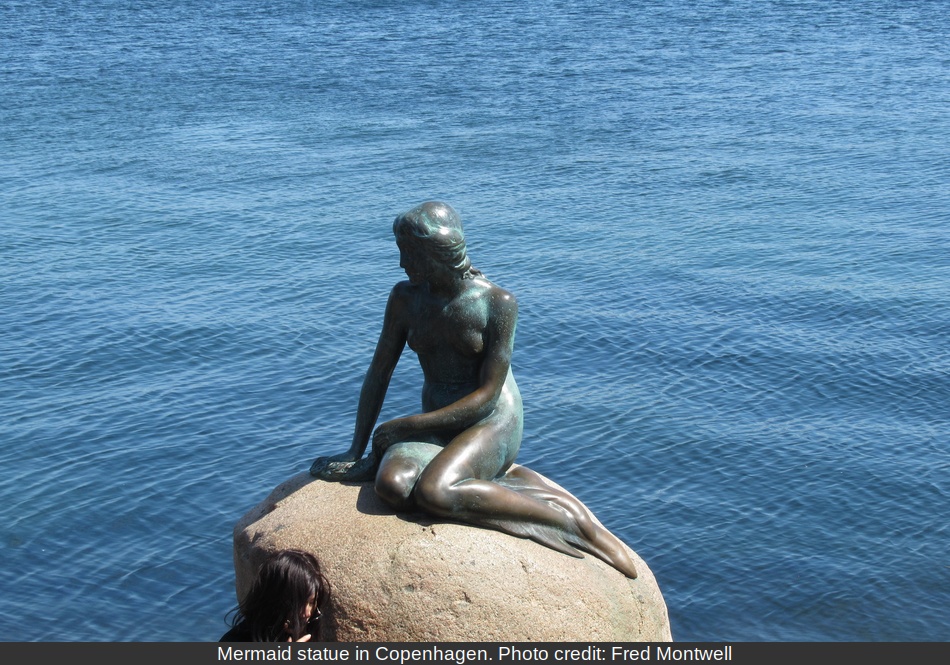 What legendary creature could be more popular than the mermaid? Since the days of silent film, this mythical being with the upper body of a woman and the tail of a fish has been featured in more than 60 movies. She has graced countless children’s books. Her image greets coffee drinkers as they order cappuccino at a Starbucks counter and drink from the cup with the twin-tailed mermaid logo. Yet, these fascinating creatures have a darker side, which is wonderfully described in an Encyclopedia Britannica article:

“Though sometimes kindly, mermaids and mermen were usually dangerous to man. Their gifts brought misfortune, and, if offended, the beings caused floods or other disasters. To see one on a voyage was an omen of shipwreck. They sometimes lured mortals to death by drowning, as did the Lorelei of the Rhine, or enticed young people to live with them underwater, as did the mermaid whose image is carved on a bench in the church of Zennor, Cornwall, England.”

No matter. The world will continue to be enamoured of mermaids. The following are three poems and some artworks that show the signficant impact of these fabled creatures on the imagination of poets and artists.

Who would be
A mermaid fair,
Singing alone,
Combing her hair
Under the sea,
In a golden curl
With a comb of pearl,
On a throne?

I would be a mermaid fair;
I would sing to myself the whole of the day;
With a comb of pearl I would comb my hair;
And still as I comb’d I would sing and say,
‘Who is it loves me? who loves not me?’
I would comb my hair till my ringlets would fall
Low adown, low adown,
From under my starry sea-bud crown
Low adown and around,
And I should look like a fountain of gold
Springing alone
With a shrill inner sound
Over the throne
In the midst of the hall;
Till that great sea-snake under the sea
From his coiled sleeps in the central deeps
Would slowly trail himself sevenfold
Round the hall where I sate, and look in at the gate
With his large calm eyes for the love of me.

But at night I would wander away, away,
I would fling on each side my low-flowing locks,
And lightly vault from the throne and play
With the mermen in and out of the rocks;
We would run to and fro, and hide and seek,
On the broad sea-wolds in the crimson shells,
Whose silvery spikes are nighest the sea.

But if any came near I would call and shriek,
And adown the steep like a wave I would leap
From the diamond-ledges that jut from the dells;
For I would not be kiss’d by all who would list
Of the bold merry mermen under the sea.

Then all the dry-pied things that be
In the hueless mosses under the sea
Would curl round my silver feet silently,
All looking up for the love of me.

And if I should carol aloud, from aloft
All things that are forked, and horned, and soft
Would lean out from the hollow sphere of the sea,
All looking down for the love of me. 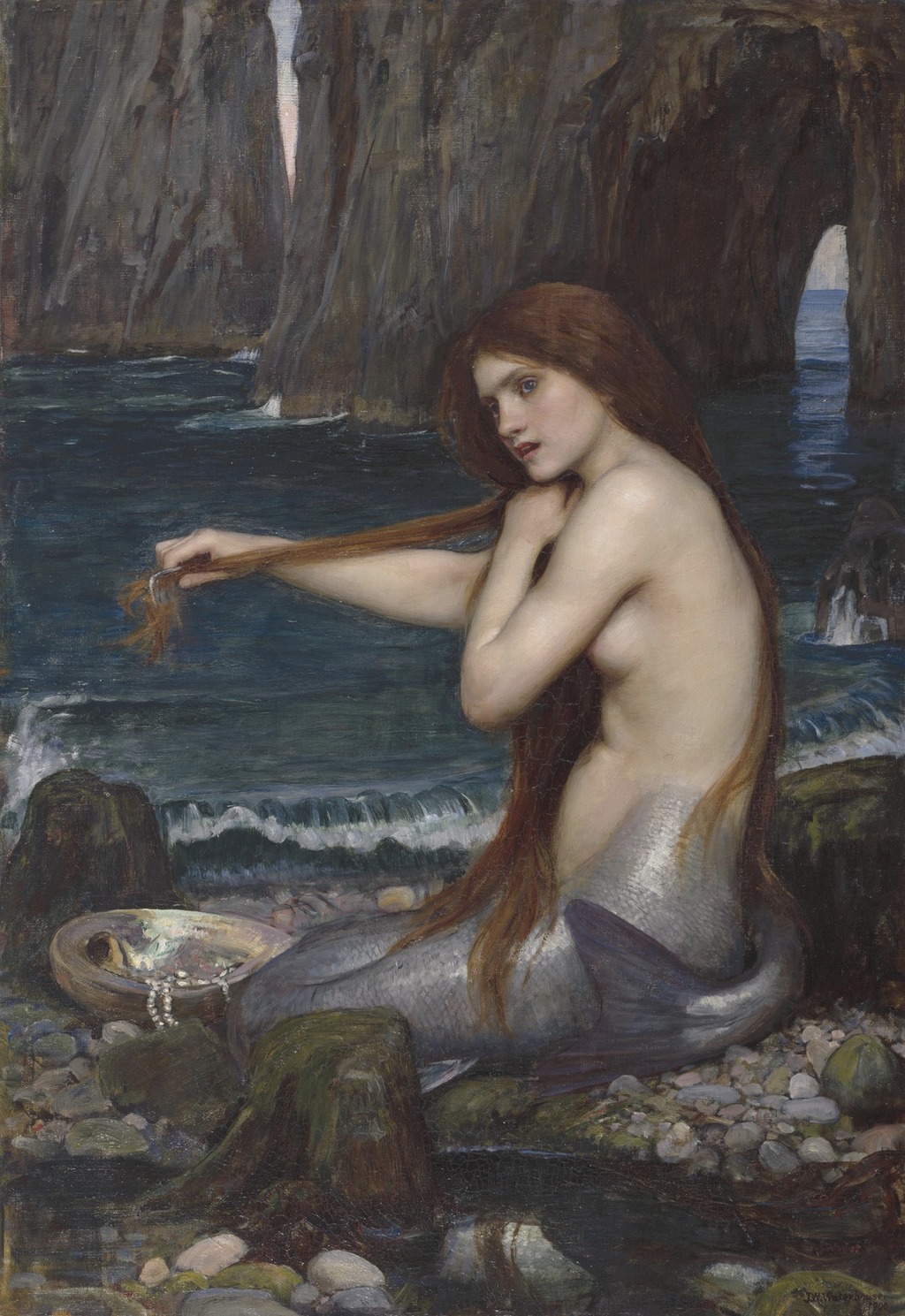 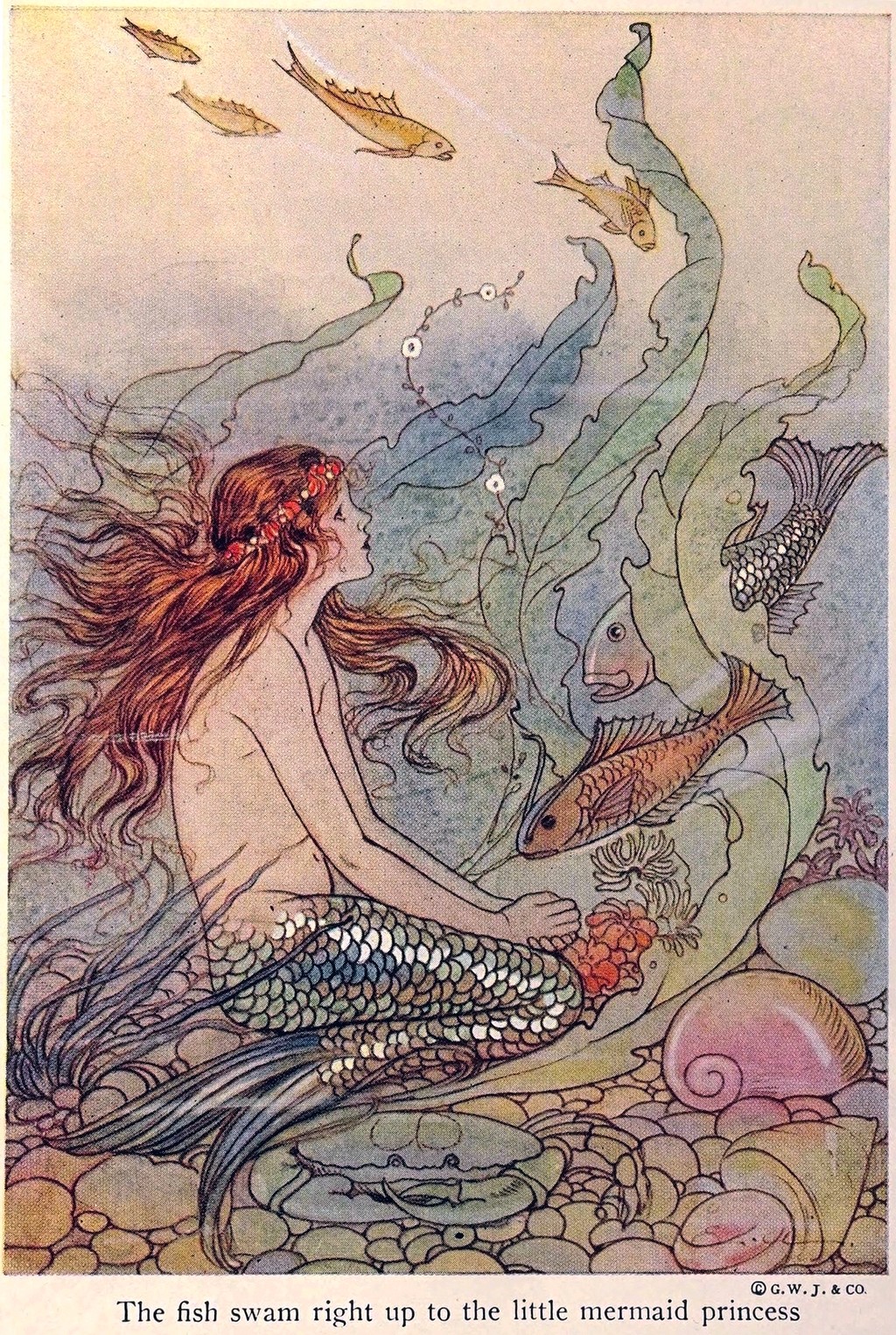 A mermaid found a swimming lad
Picked him for her own,
Pressed her body to his body,
Laughed; and plunging down
Forgot in cruel happiness
That even lovers drown. 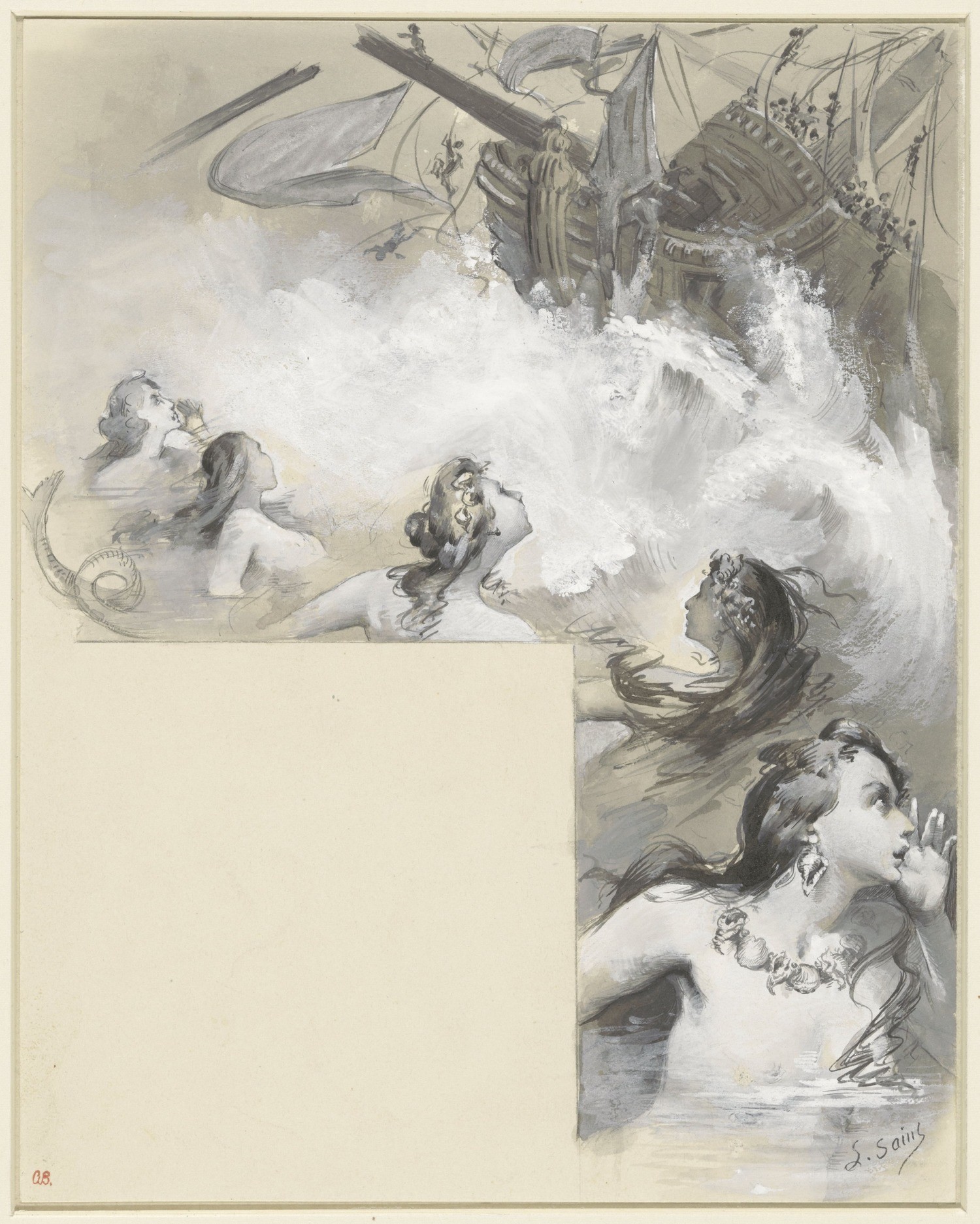 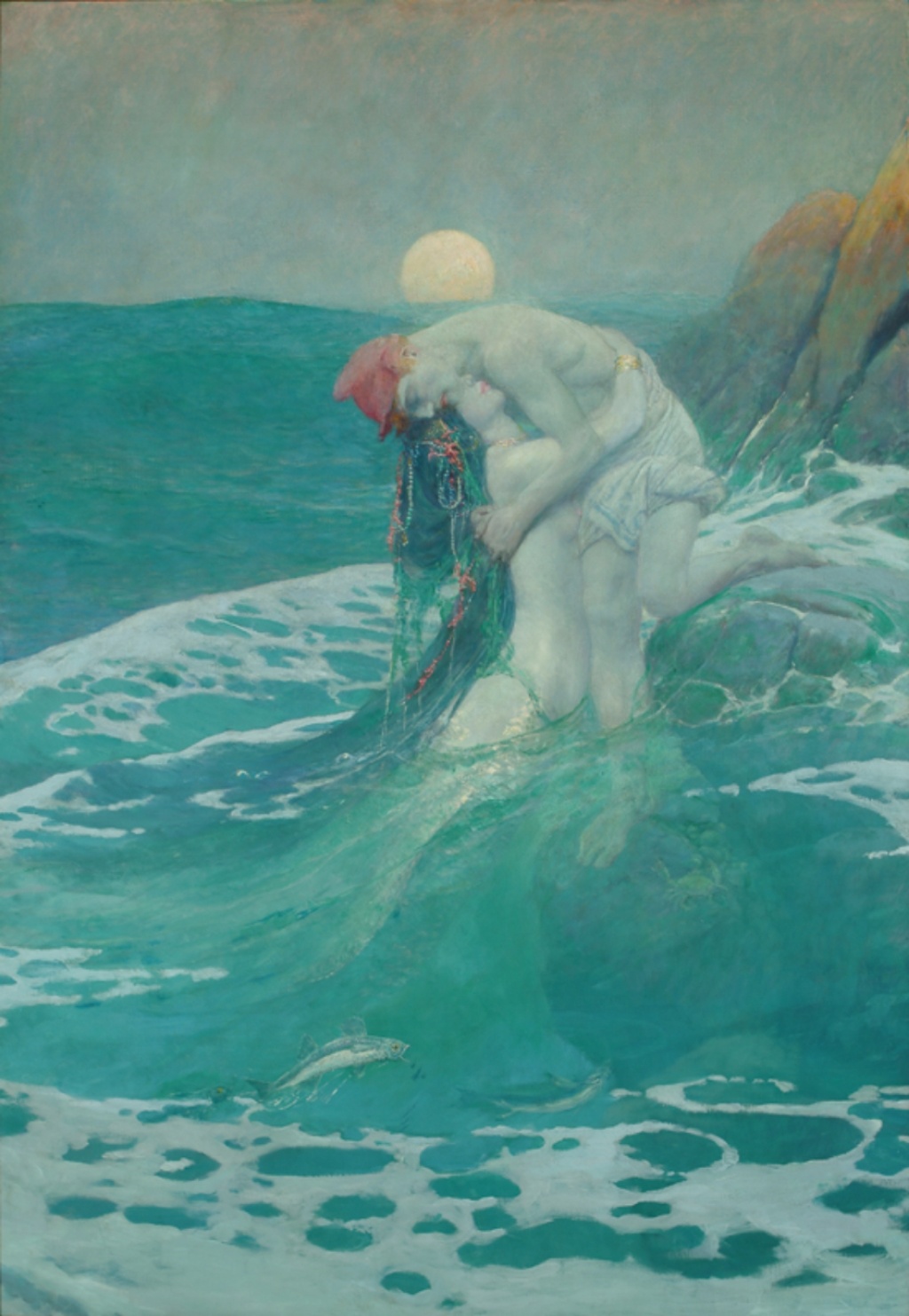 Blow on, ye death fraught whirlwinds! blow,
Around the rocks, and rifted caves;
Ye demons of the gulf below!
I hear you, in the troubled waves.
High on this cliff, which darkness shrouds
In night’s impenetrable clouds,
My solitary watch I keep,
And listen, while the turbid deep
Groans to the raging tempests, as they roll
Their desolating force, to thunder at the pole.

Eternal world of waters, hail!
Within thy caves my Lover lies;
And day and night alike shall fail
Ere slumber lock my streaming eyes.
Along this wild untrodden coast,
Heap’d by the gelid’ hand of frost;
Thro’ this unbounded waste of seas,
Where never sigh’d the vernal breeze;
Mine was the choice, in this terrific form,
To brave the icy surge, to shiver in the storm

Yes! I am chang’d – My heart, my soul,
Retain no more their former glow.
Hence, ere the black’ning tempests roll,
I watch the bark, in murmurs low,
(While darker low’rs the thick’ning’ gloom)
To lure the sailor to his doom;
Soft from some pile of frozen snow
I pour the syren-song of woe;
Like the sad mariner’s expiring cry,
As, faint and worn with toil, he lays him down to die.

Then, while the dark and angry deep
Hangs his huge billows high in air ;
And the wild wind with awful sweep,
Howls in each fitful swell – beware!
Firm on the rent and crashing mast,
I lend new fury to the blast;
I mark each hardy cheek grow pale,
And the proud sons of courage fail;
Till the torn vessel drinks the surging waves,
Yawns the disparted main, and opes its shelving graves.

When Vengeance bears along the wave
The spell, which heav’n and earth appals;
Alone, by night, in darksome cave,
On me the gifted wizard calls.
Above the ocean’s boiling flood
Thro’ vapour glares the moon in blood:
Low sounds along the waters die,
And shrieks of anguish fill the’ sky;
Convulsive powers the solid rocks divide,
While, o’er the heaving surge, the embodied spirits glide.

Thrice welcome to my weary sight,
Avenging ministers of Wrath!
Ye heard, amid the realms of night,
The spell that wakes the sleep of death.
Where Hecla’s flames the snows dissolve,
Or storms, the polar skies involve;
Where, o’er the tempest-beaten wreck,
The raging winds and billows break;
On the sad earth, and in the stormy sea,
All, all shall shudd’ring own your potent agency.

To aid your toils, to scatter death,
Swift, as the sheeted lightning’s force,
When the keen north-wind’s freezing breath
Spreads desolation in its course,
My soul within this icy sea,
Fulfils her fearful destiny.
Thro’ Time’s long ages I shall wait
To lead the victims to their fate;
With callous heart, to hidden rocks decoy,
And lure, in seraph-strains, unpitying, to destroy. 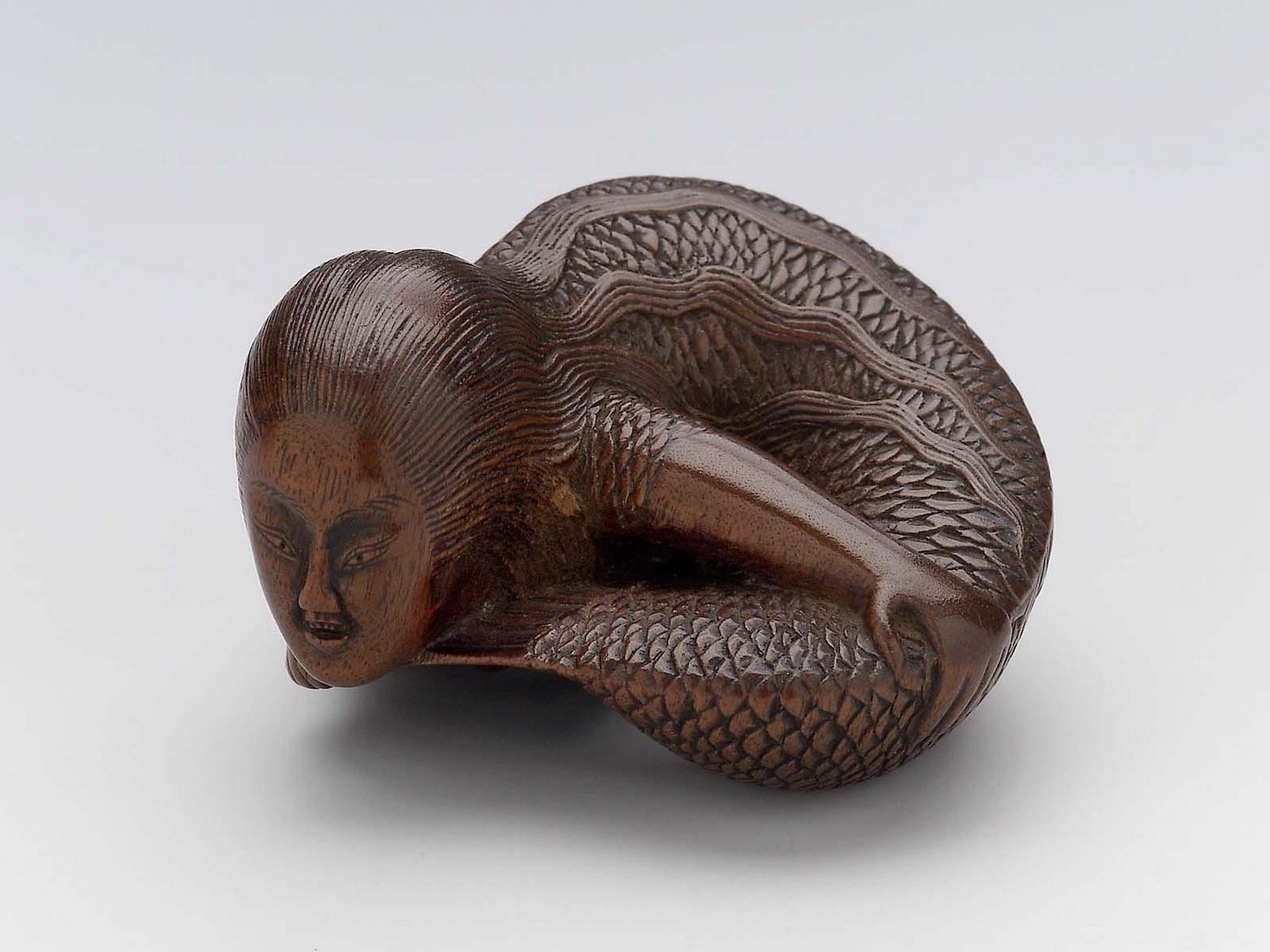 In the end, we must regard mermaids as fortunate beings. They gambol by the sea and frolick in the sun, free from the countless wordly cares that bedevil humans. They go about without hankering for anything except love. They also exercise power, whether for good or for bad, unlike many women in today’s world who continue to be oppressed and subjugated by men. 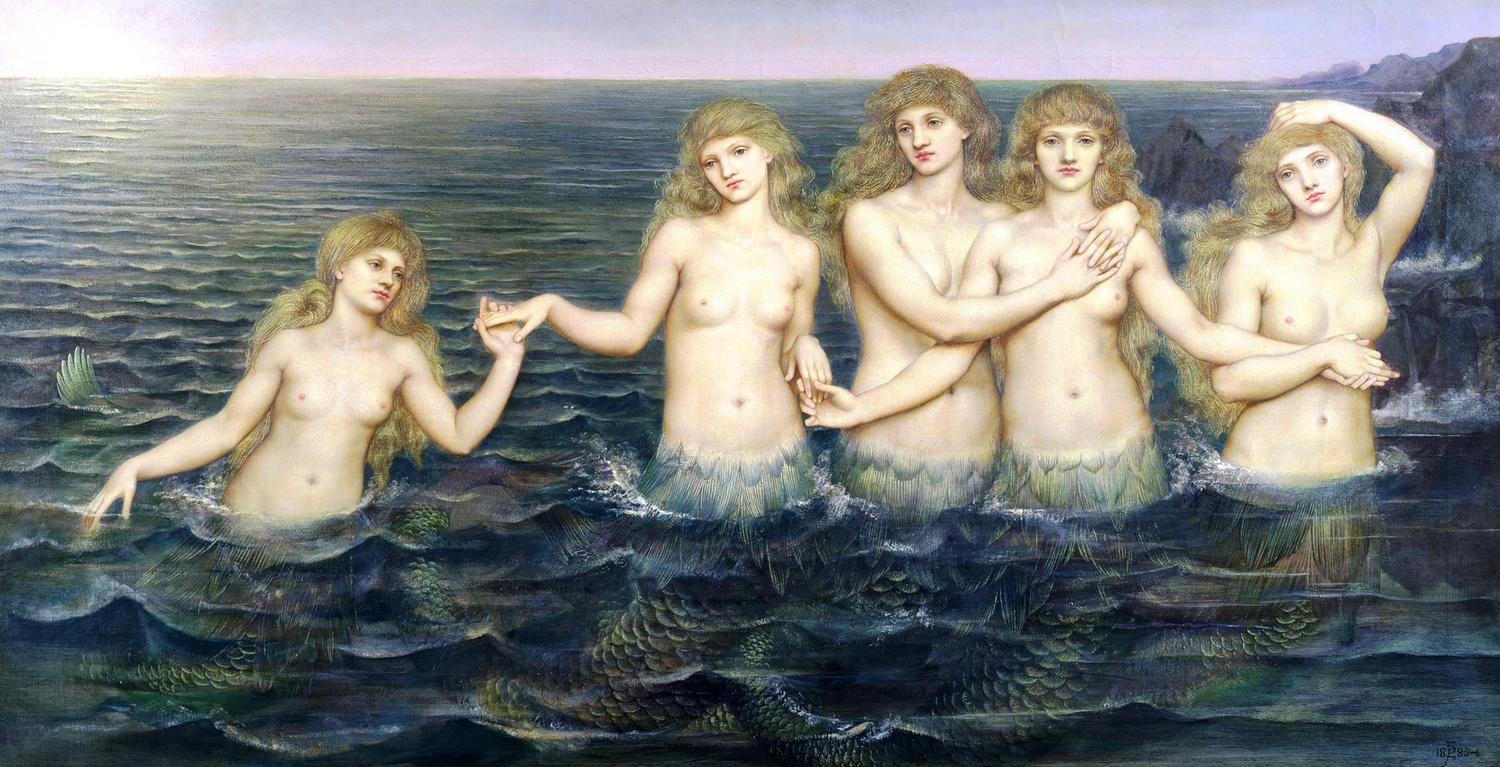 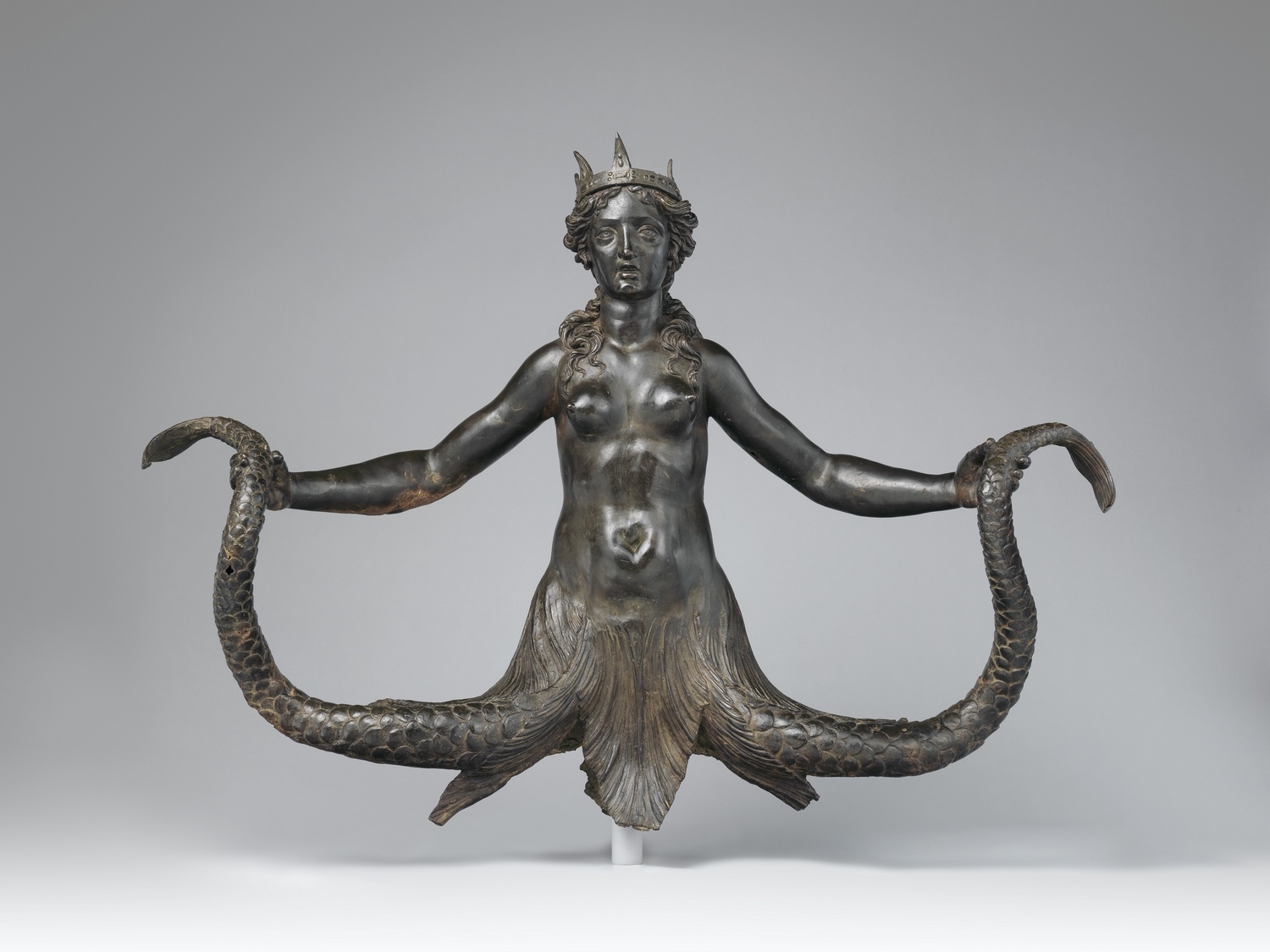