A legacy of love: Fishermen in Vincent van Gogh’s art 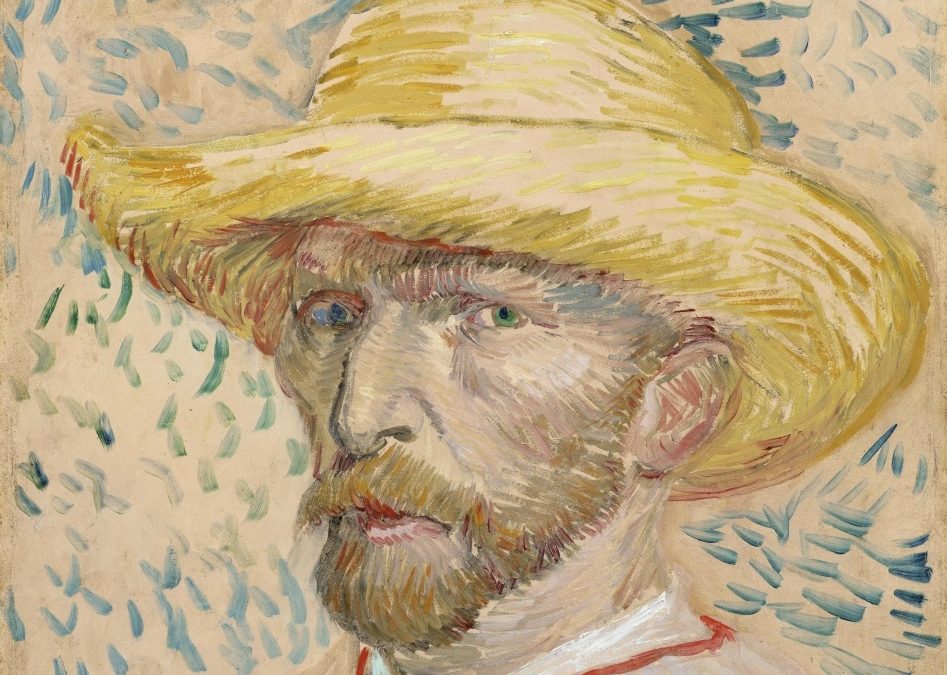 Countless artists have painted or made drawings of fishermen. However, Dutch post-Impressionist painter Vincent van Gogh (1853-1890) did so with unusual passion. Viewing his works, one is left feeling that the artist, not only possessed great talent, but had a genuine empathy for his subjects. Why did Vincent, who was never a sailor and never, by all accounts, travelled by ship, have a strong connection with the sea and fishermen?

The answer can be gleaned from the Van Gogh Letters Project, a collection of all surviving letters written and received by the artist. The treasure trove of correspondence reveals that Vincent’s uncle, Jan van Gogh, was a naval officer. He expressed admiration for his fellow artist, Paul Gauguin, after learning that he had served as a junior officer in the merchant navy. In a letter to his brother, Theo van Gogh, Vincent wrote:

I did know that Gauguin had travelled, but I didn’t know he was a real seaman; he’s been through all the difficulties, he was a real topman on the topmast and a real sailor. That gives me a tremendous respect for him, and an even more absolute confidence in his personality.

The letters also cast light on Vincent’s theory of art, his views on society, and his fascination with the sea. In his August 1882 letter to Theo, he described the joy of watching the sea at Scheveningen near the Hague in stormy weather:

It’s been so beautiful at Scheveningen the last few days. The sea was almost more imposing before the storm than when the storm actually arrived. During the storm the waves were less visible and there was less the effect of furrows of ploughed land… The sea was the colour of dirty dishwater. At that spot there was a fishing-boat, the last in the row, and several dark figures.

In 1888 Vincent would once again enjoy the sight of the sea and fishing boats when he sojourned in Saintes-Maries-de-la-Mer on the coast of the Mediterranean. His stay in the small fishing town produced some of his most beautiful seascapes. 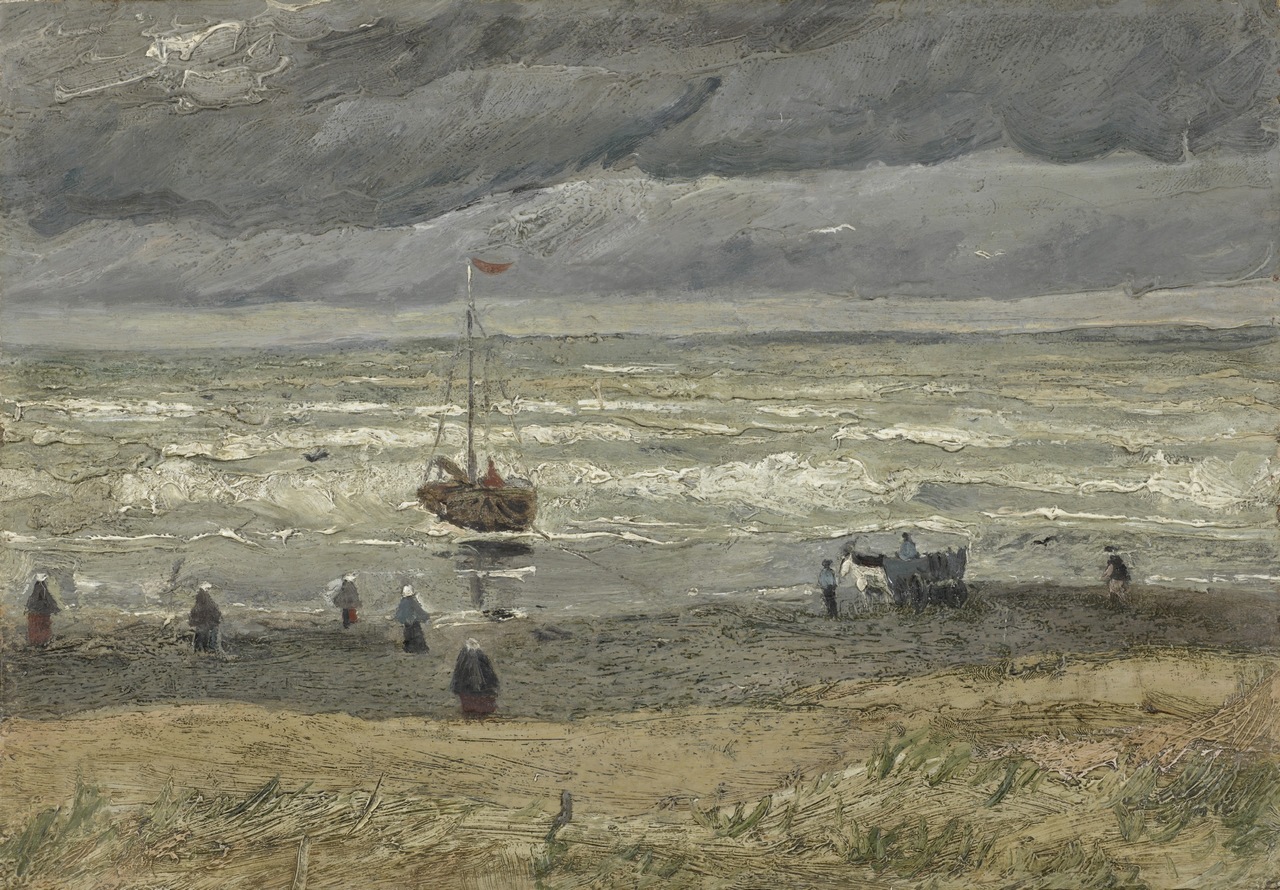 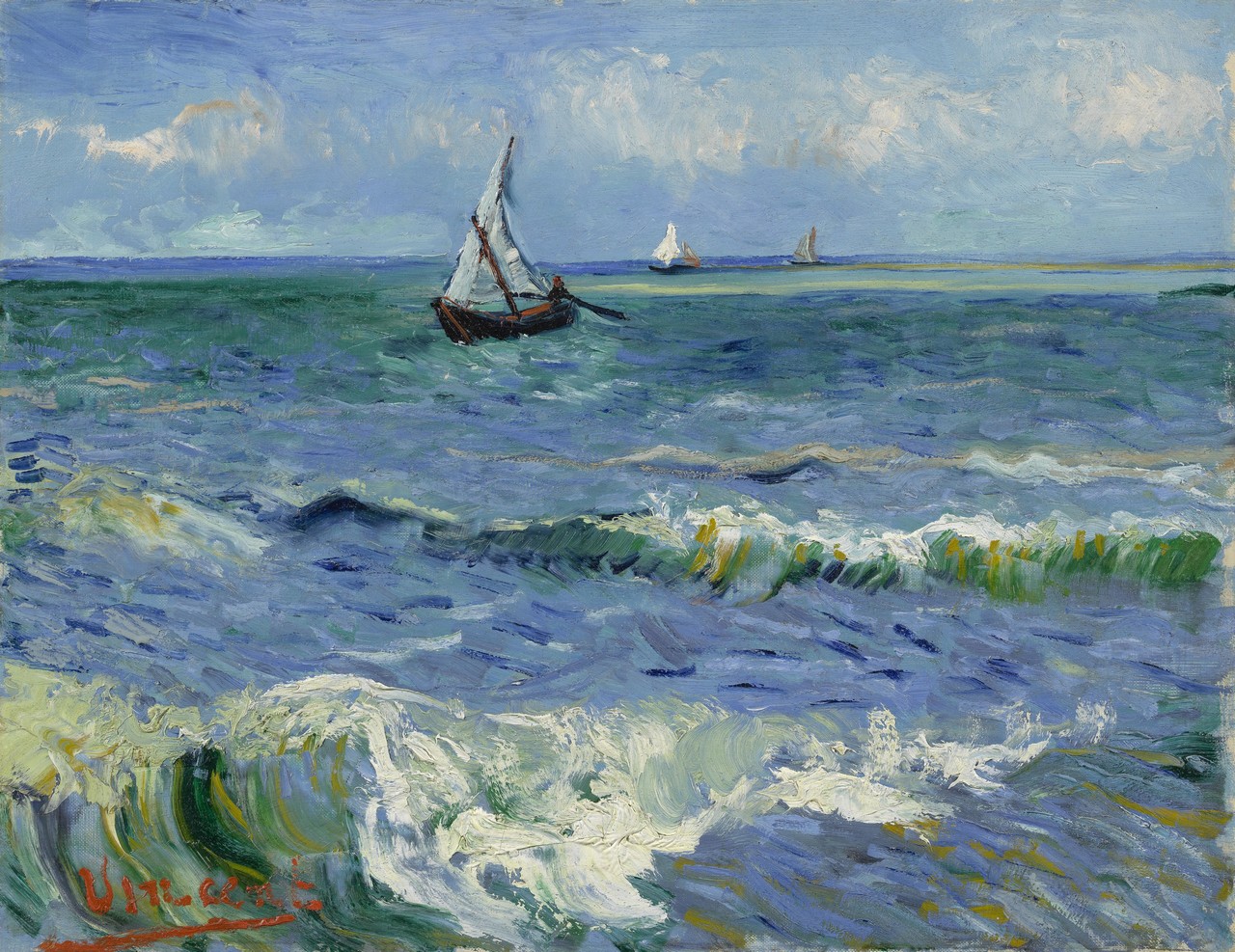 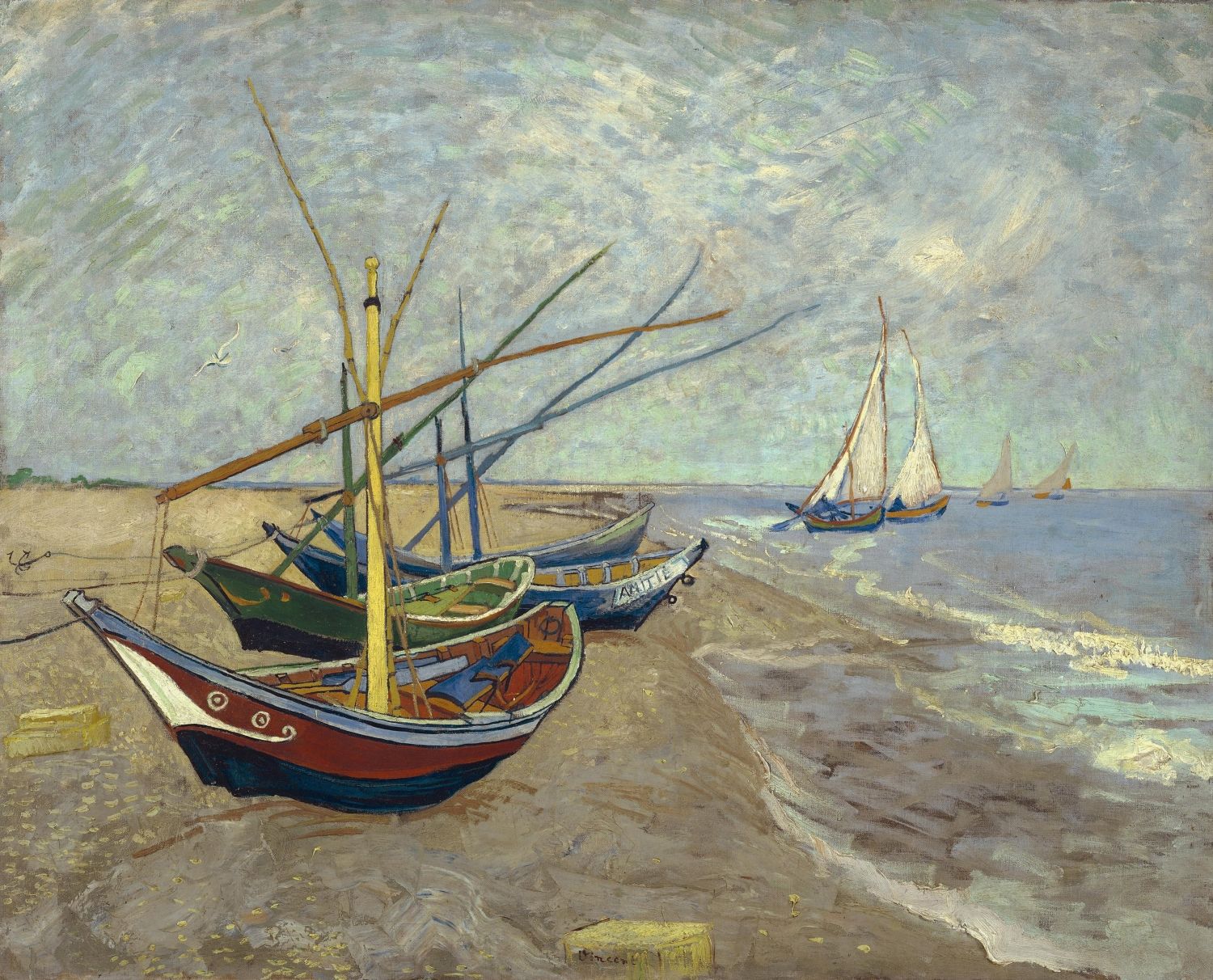 Fishing boats on the beach at Les Saintes-Maries-de-la-Mer by Vincent vn Gogh, 1888
Courtesy of the Google Art Project

Get this premium matte poster of Van Gogh’s ‘Fishing boats on the beach at Les-Saintes-Maries-de-la-Mer’ from The Nautical Shop of Marine Café Blog. 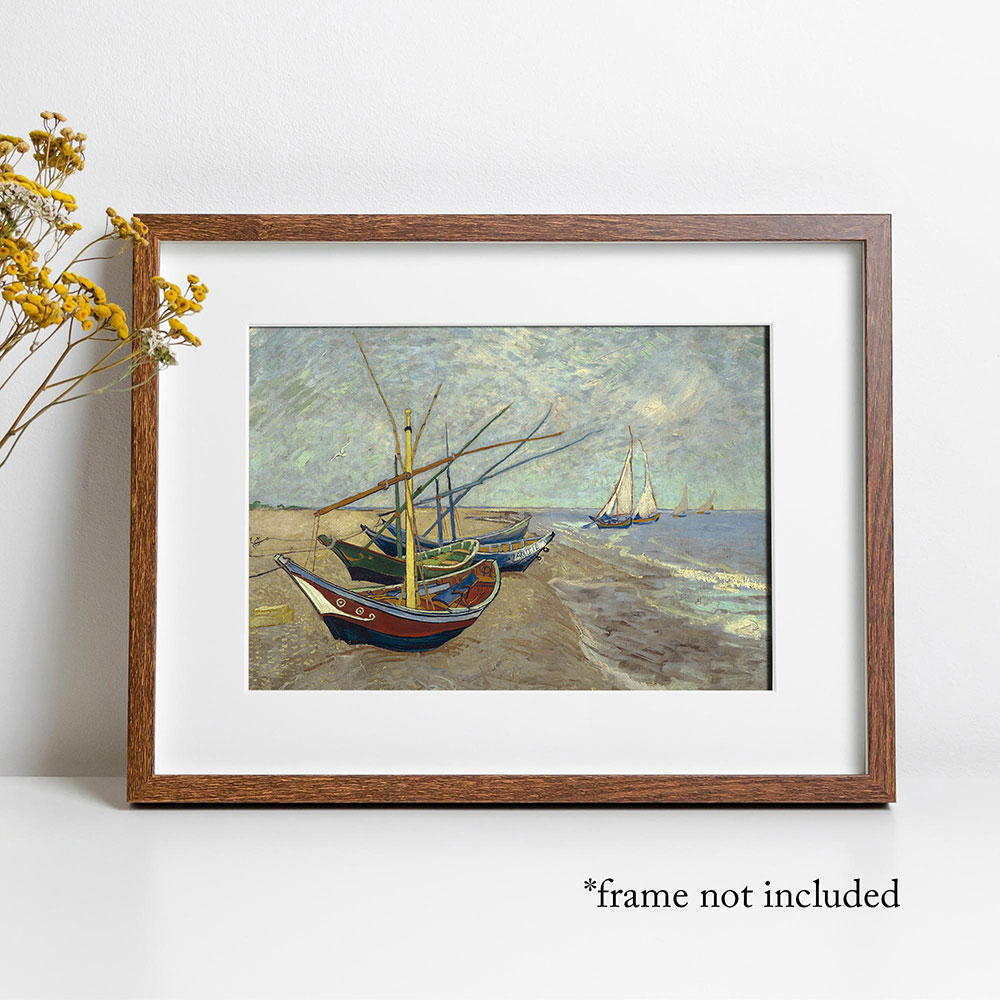 As noteworthy as Vincent’s love of the sea and nature in general was his compassion for the working class. He never concealed the fact that he would rather feature lowly, hardworking folks in his art than the bourgeois citizens of Paris. In one letter, he told his brother with typical candour:

I think that it’s something to know Paris well — that if, once there, you become a Parisian through and through — analytical, steely, and what they call shrewd — I don’t want to be so petty-minded as to condemn it. I’m not like that. Be a Parisian, remain one — that’s fine, if it’s what you want.

There are various things in the world that are great — the sea with the fishermen — the furrows and the peasants — the mines and the colliers.

Vincent’s drawings of fishermen are striking and soulful. They are as powerful as his rendition of potato diggers, including the famous Digger in a Potato Field. Two portraits of fishermen in the Van Gogh Museum call to mind the lines in ‘Pilate’s Dream’, a song from the 1970 rock opera, Jesus Christ Superstar:

I dreamed I met a Galilean;
A most amazing man.
He had that look you very rarely find:
The haunting, hunted kind. 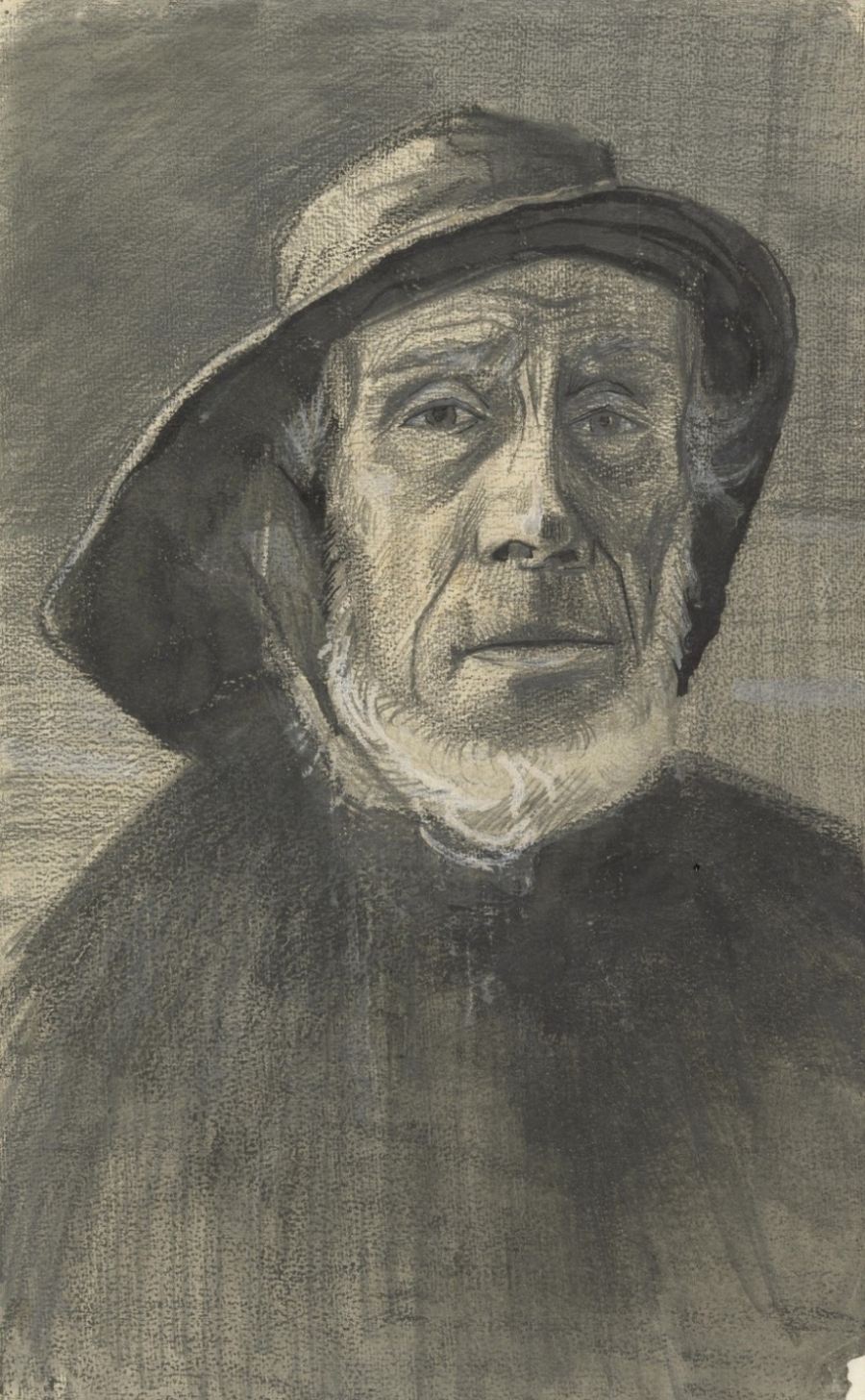 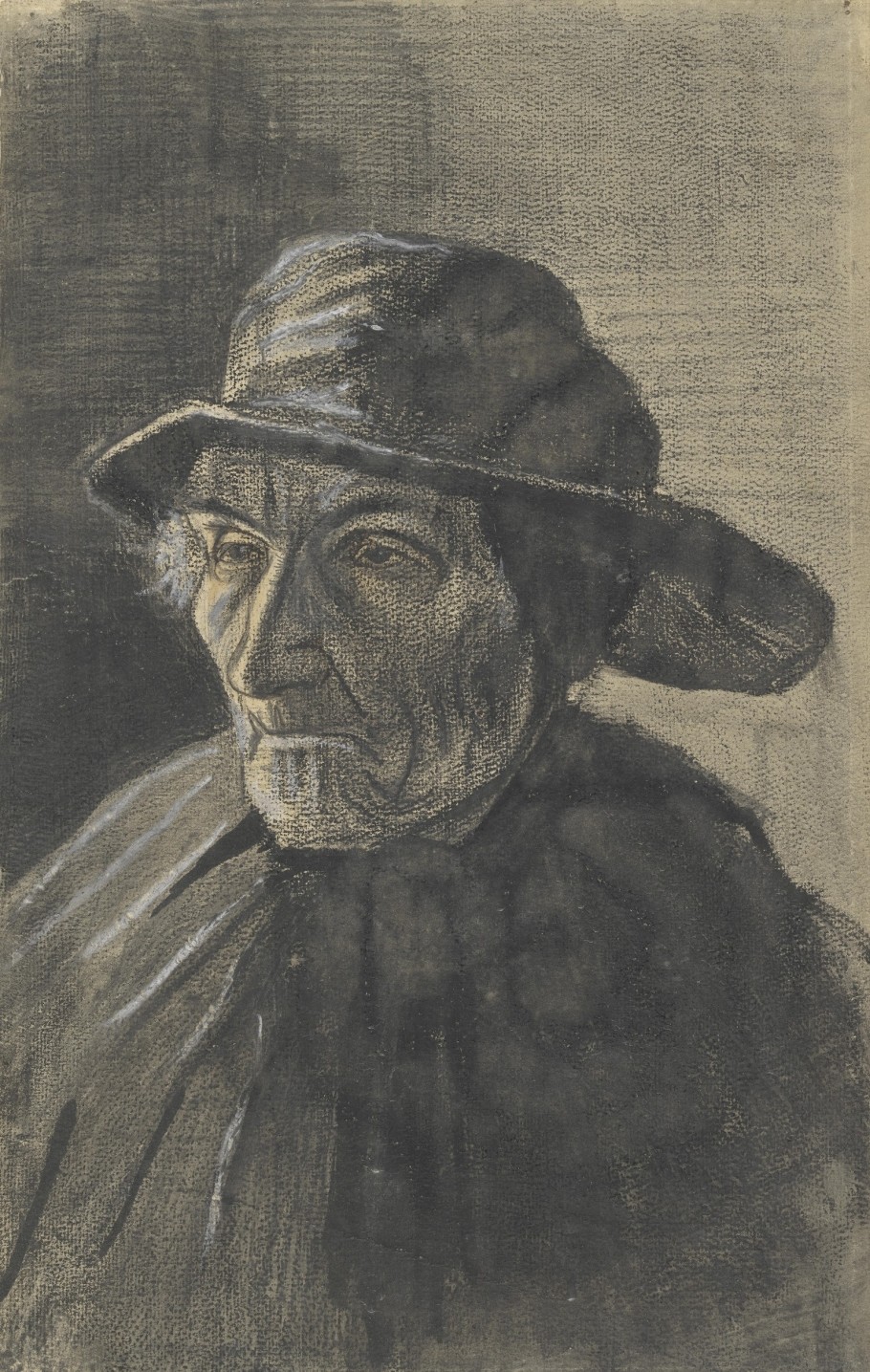 Vincent van Gogh was a troubled and gifted soul. On 27th July 1890, at the age of 37, he committed suicide by shooting himself in the chest with a revolver. His short life had been an epic story of anguish and love for others, especially the poor and downtrodden. Doctor Who, the British science fiction television programme produced by the BBC, once paid tribute to the man and the profound message he sought to convey through his art. A promotional video clip of the episode can move one to tears.