A refusal to observe ‘Day of the Seafarer’

by Barista Uno | Jun 20, 2018 | Announcements and Events, Manning and Training

I should be joining the rest of the world and making whoopee on the ‘Day of the Seafarer’, 25th June. But I won’t. I will spend the day quietly and alone like the monk in Caspar David Friedrich‘s circa-1809 painting ‘Der Moench am Meer / The Monk by the Sea’ (pictured above).

You can call me a wet blanket or even a sourpuss. But I simply refuse to take part in a celebration that is attended by so much hypocrisy. In Manila, Filipino mariners will be feted for a day by crewing agencies and the unions. The rest of the year they will be screwed in myriad ways by the very folks who exalt them. That includes getting shortchanged in the conversion of their dollar remittances and, in the case of maritime cadets, being exploited as unpaid flunkeys and servants. 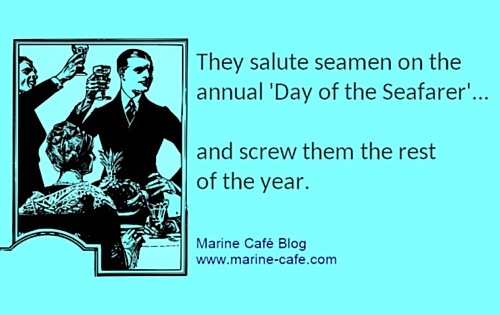 There is a simpler reason I refuse to observe the ‘Day of the Seafarer’: it is an anomaly. The 25th of June was declared as such at the end of the International Maritime Organization (IMO) diplomatic conference held in Manila from 21st to 25th June 2010 to amend the International Convention on Standards of Training, Certification and Watchkeeping for Seafarers (STCW). The annual event has since been spearheaded by the IMO. It was a publicity stunt that somehow sugar-coated the 2010 STCW amendments and the consequent training overload on seamen.

Now, what has the IMO got to do with the rights and welfare of merchant mariners? Maritime Labour Convention, 2006 — the milestone “bill of rights” for seamen — is an International Labour Organization (ILO) treaty. To be more specific, what has the IMO done to make life less stressful and happier for seamen? Absolutely zilch. Nada.

Let the shipowners, crewing agents, seamen’s unions, NGOs and the maritime press sing their hearts out like an army of mynahs in praise of seamen. I would much rather watch the highlights of the 2018 World Cup on Russia’s RT network. Though I am not into football, grown-up men running to and fro and chasing after a ball makes more sense to me.