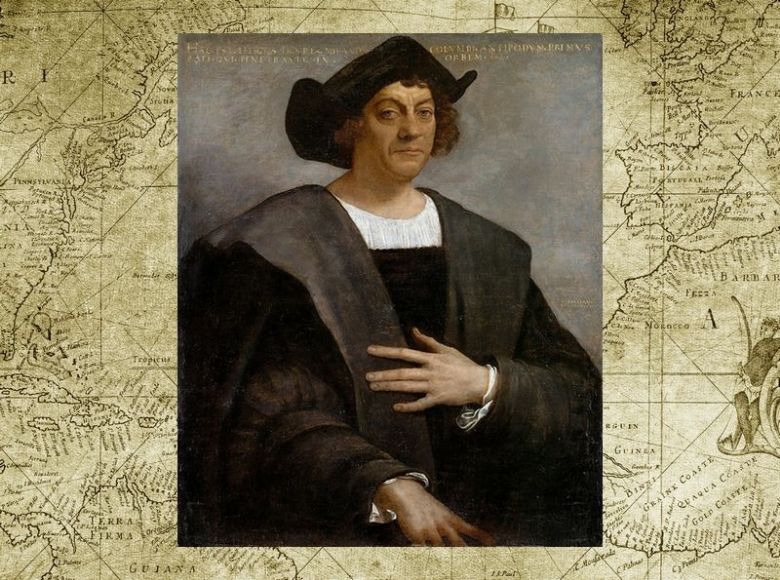 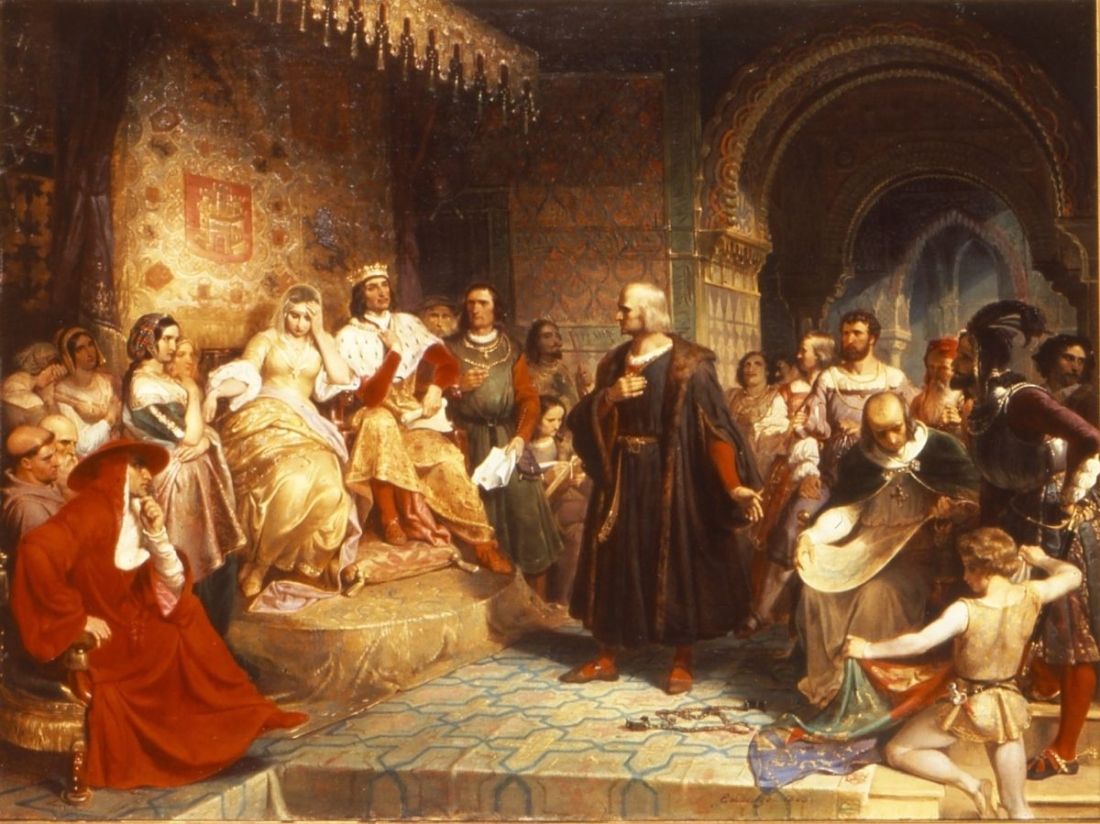 Columbus is shown addressing the Spanish monarchs Ferdinand II of Aragon and Isabella I of Castile. Their financial backing made it possible for the Italian explorer to make four voyages across the Atlantic between 1492 and 1503. Interestingly, Emanuel Leutze’s painting is called ‘Columbus before the Queen’. Shouldn’t the king be included in the title? — BU

Read my article Female supremacy in the shipping world. 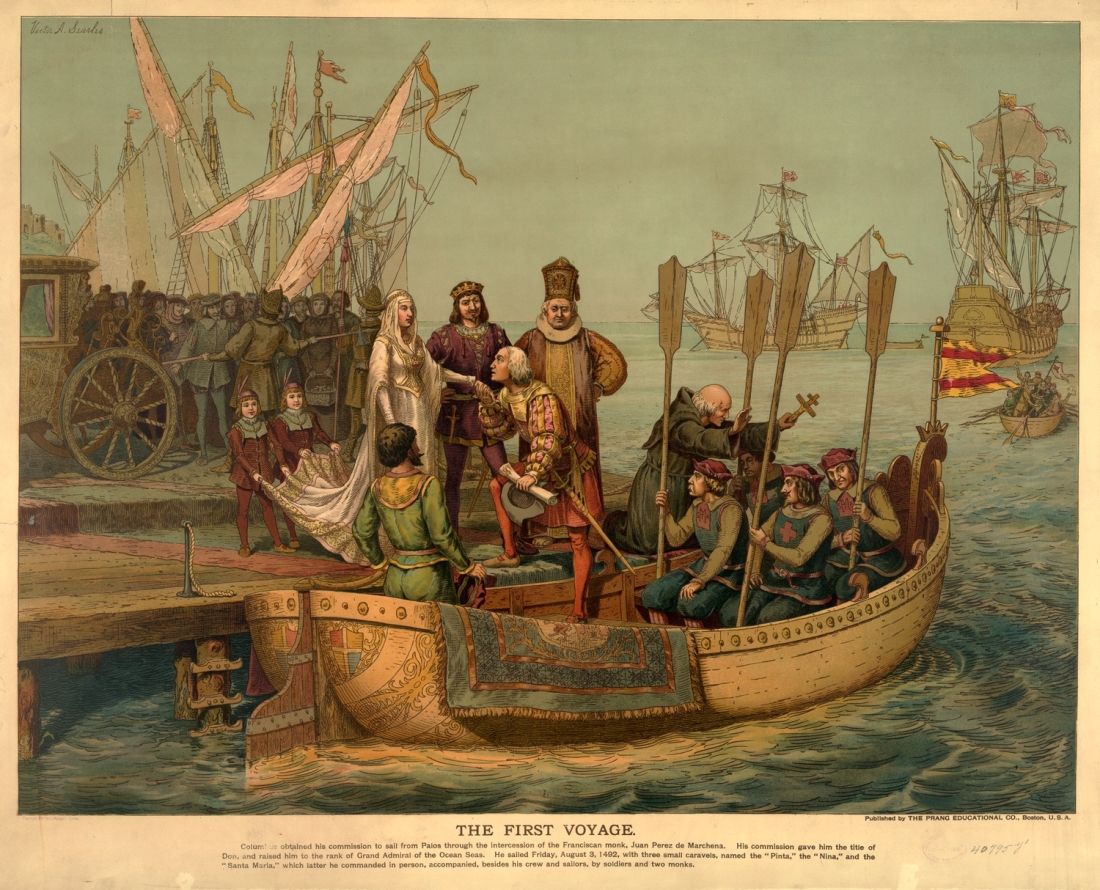 The First Voyage
Published by The Prang Educational Co., 1893
Courtesy of the Library of Congress, USA

The description on the original print reads: “Columbus obtained his commission to sail from Palos through the intercession of the Franciscan monk, Juan Perez de Marchena. His commission gave him the title of Don, and raised him to the rank of Grand Admiral of the Ocean Seas. He sailed Friday, August 3, 1492, with three small caravels, named the “Pinta,” the “Nina,” and the “Santa Maria,” which latter he commanded in person, accompanied, besides his crew and sailors, by soldiers and two monks.” 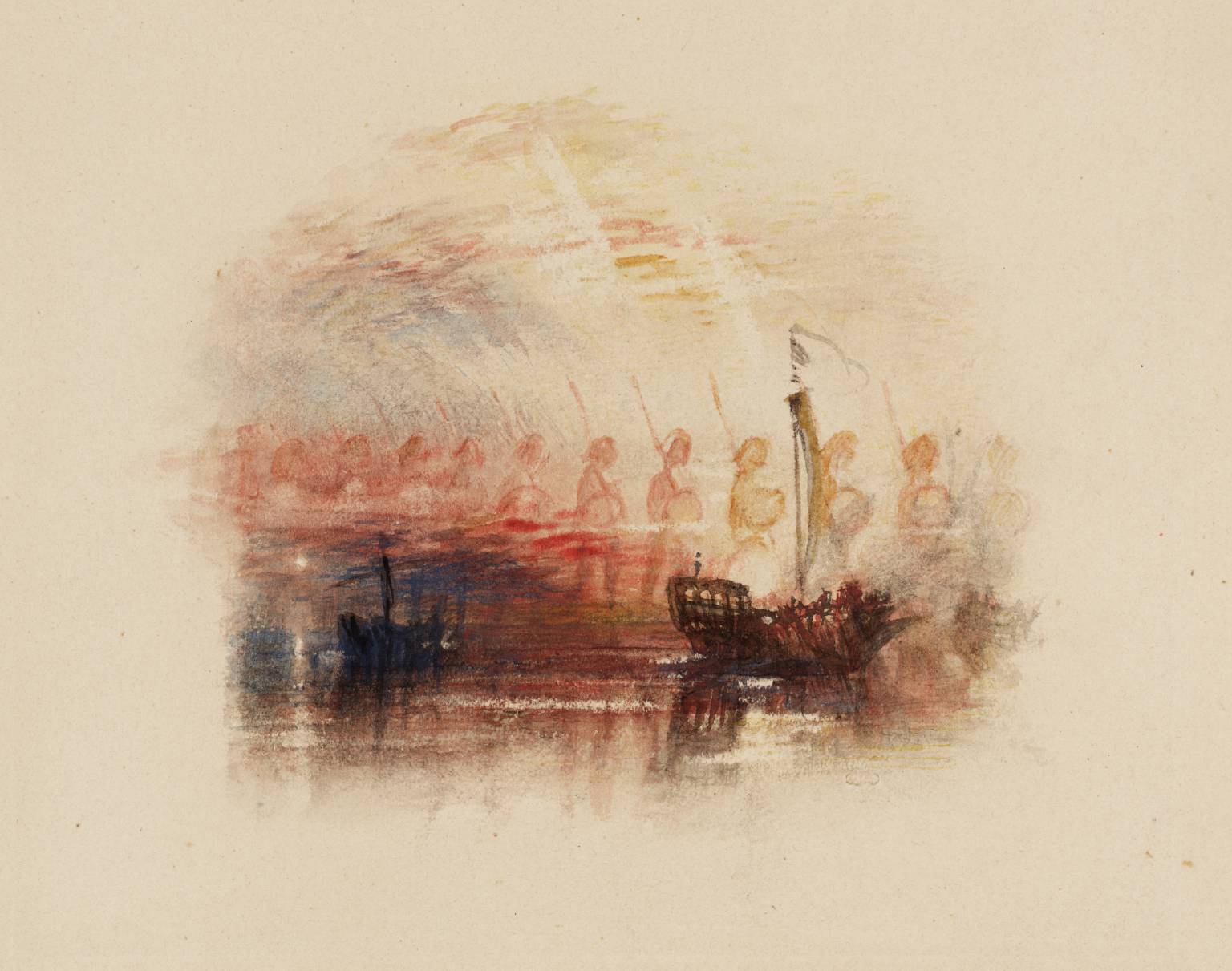 Turner’s drawing shows a phalanx of spirits marching with spears and shields across the sky. The surrealistic image hews to the following excerpt from ‘The Voyage of Columbus’, a narrative poem written by English poet Samuel Rogers (1763–1855):

“The pilot smote his breast; the watchman cried “Land!” and his voice in faltering accents died.
At once the fury of the prow was quelled;
And (whence or why from many an age withheld)
Shrieks, not of men, were mingling in the blast;
And armed shapes of god-like stature passed!
Slowly along the evening-sky they went,
As on the edge of some vast battlement;
Helmet and shield, and spear and gonfalon,
Streaming a baleful light that was not of the sun!”

(from ‘The Voyage of Columbus’, Canto II) 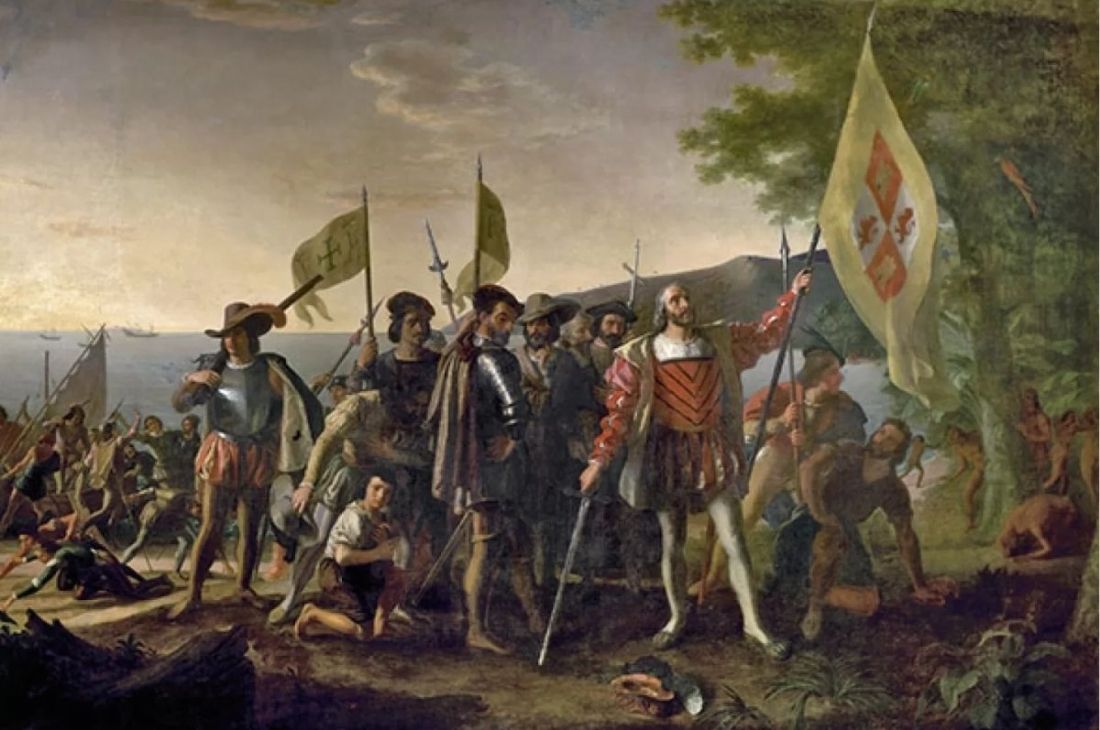 This painting, one of four scenes of early exploration in the U.S. Capitol Rotunda, depicts Christopher Columbus and his crew on a beach in the West Indies. They have just landed from  Columbus’ flagship Santa Maria on 12 October 1492.

Learn more about this painting: The Landing of Columbus 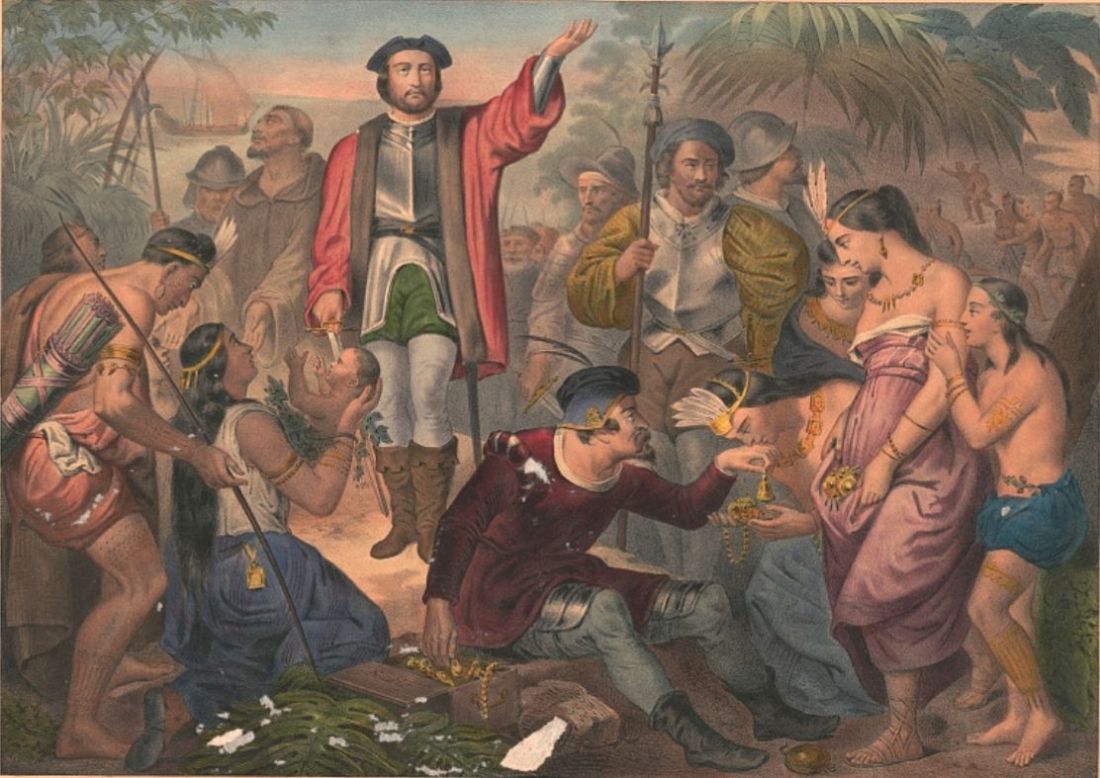 Christopher Columbus among the Indians
Lithograph, between 1850 and 1900
J. Turgis & Company (Paris), publisher
Courtesy of the Library of Congress, USA

This colour lithograph attempts to paint a benign image of Columbus. In the foreground, one of his men is shown giving some jewelry as gifts to the indigenous women. Columbus stands with the palm of his left hand raised towards the sky as if to say that they come in peace. Yet, his right hand is holding a sword. — BU 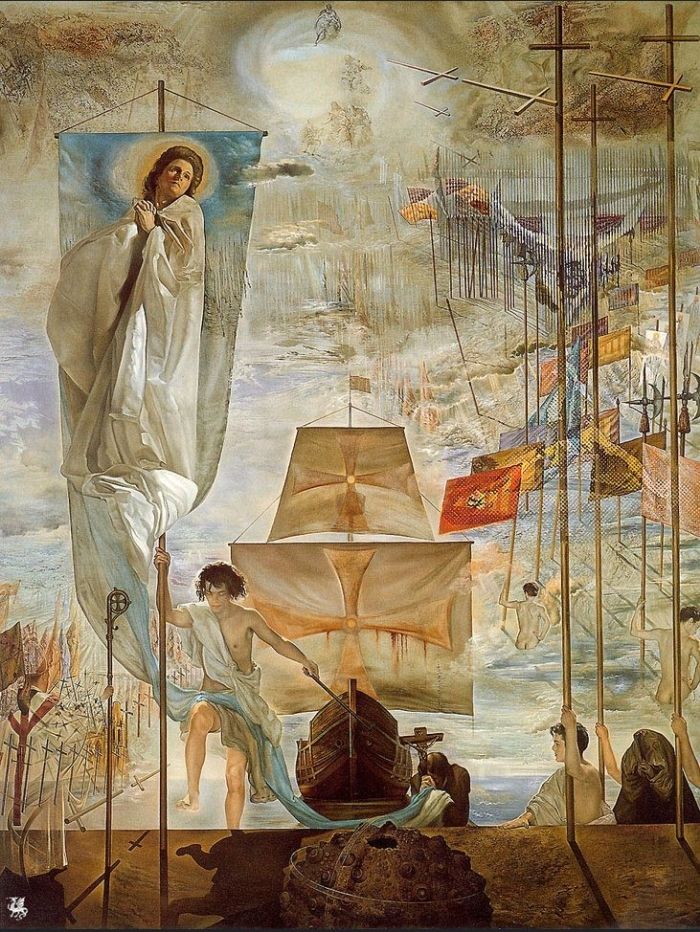 The Discovery of America by Christopher Columbus
Oil on canvas, 1958-1959
Salvador Dali (Spanish, 1904–1989)
Courtesy of WikiArt: Visual Art Encycloedia
NOTE: This work is copyrighted in the US (©Salvador Dalí Museum, Inc. St. Petersburg, FL, 2022) and worldwide (©Salvador Dalí. Fundació Gala-Salvador Dalí (Artists Rights Society), 2022). It is published here under the principle of Fair Use.

This mystical painting by Spanist surrealist artist Salvador Dali depicts Columbus landing on a beach in the West Indies. He is shown on the left side as a youngster holding a giant banner with the image of a woman wearing a halo and flowing white robes. Dali’s work, which is 14 feet (4.27 m.) tall by 9 feet (2.7 m.) wide, is an unabashedly euphoric celebration of the arrival of Christianity in the New World. One might describe it as a religious montage with multiple images of the cross. — BU