Billy Budd, Sailor (An Inside Narrative) by Herman Melville (for smartphones and tablets) 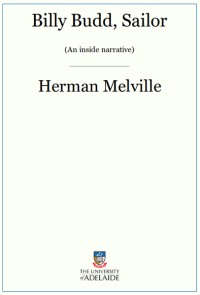 Billy Budd, Sailor (An Inside Narrative) by Herman Melville (for smartphones and tablets)

Herman Melville's final novel, Billy Budd, Sailor (An Inside Narrative), is essential reading for literature buffs and even admiralty law students. First published posthumously in 1924, the unfinished work tells the story of Billy Budd, a young and handsome seaman who is conscripted into service aboard the HMS Bellipotent in 1797. Budd is popular amongst the crew except for the ship's evil and jealous master-at-arms, John Claggart. The latter falsely accuses him of conspiracy to mutiny. Budd kills Claggart during a meeting between the two men called by the captain, which leads to Budd's court-martial and subsequent execution. (File size: 154.1 KiB, EPUB format)