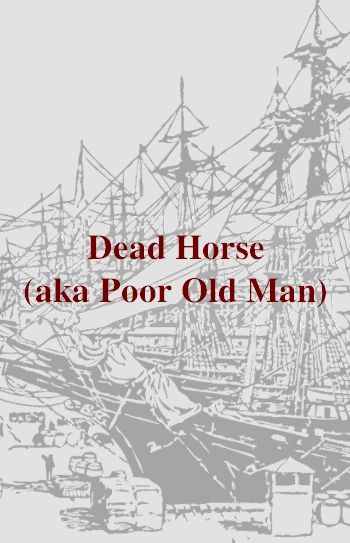 'Dead Horse' (also known as 'Poor Old Man') is a ceremonial shanty sung at the end of a sailor's first month at sea. It was to celebrate the end of the sailor's debt to the ship, when he started working for himself. This song is a Marine Café Blog remaster of the 1939 recording from the US Library of Congress. It features the unaccompanied vocals of Alex Barr, Arthur Gilchrist Brodeur. Sidney Robertson Cowell, Leighton McKenzie and Leighton Robinson. (4.8 MiB, MP3, 3:25 minutes)

In a Library of Congress blog article, Stephen Winick says about this shanty: "The “Dead Horse” shanty refers to a particular tradition among sailors relating to the advance they typically drew on their wages. Usually, a sailor went to sea after his credit ran out ashore, so he used an advance on his wages to pay his creditor, who was usually the boarding house master where he lived. Because of this, for the first one to three months of his voyage he was just working off his debt—which was known as “paying for a dead horse.” CLICK HERE to read 'A Deep Dive Into Sea Shanties'.