The Pilot: A Tale of the Sea by James Fenimore Cooper 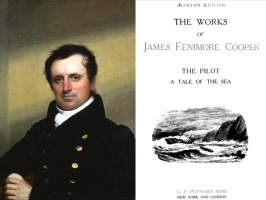 The Pilot: A Tale of the Sea by James Fenimore Cooper

First published in 1824, The Pilot: A Tale of the Sea is a novel by James Fenimore Cooper, the first major American novelist and a sailor by profession. Says the Encyclopedia Britannica: The work, which was admired by Herman Melville and Joseph Conrad for its authentic portrayal of a seafaring life and takes place during the American Revolution, launched a whole genre of maritime fiction. It features a mysterious and almost superhuman American sea pilot (based on the American hero John Paul Jones) who fights battles off the coast of England against the British and American loyalists. (10.3 MiB, PDF, 454 pages)