The Truth About the Titanic by Colonel Archibald Gracie 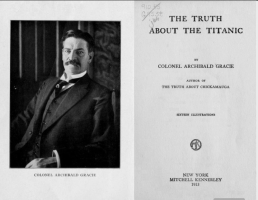 The Truth About the Titanic by Colonel Archibald Gracie

The Truth About the Titanic is considered one of the most accurate firsthand accounts of the tragedy. It was written by Colonel Archibald Gracie, a passenger on the RMS Titanic who was part of the heroic efforts to put other passengers onto the lifeboats. Published posthumously in 1913, the book sets the record straight on what really happened. Gracie describes, for instance, the moment immediately after the iceberg struck: It was now that the band began to play, and continued while the boats were being lowered.We considered this a wise provision tending to allay excitement. I did not recognize any of the tunes, but I know they were cheerful and were not hymns. If, as has been reported, ''Nearer My God to Thee'' was one of the selections, I assuredly should have noticed it and regarded it as a tactless warning of immediate death to us all and one likely to create a panic that our special efforts were directed towards avoiding... (File size: 13 MiB, PDF, 366 pages)