Treasure Island by Robert Louis Stevenson (for smartphones and tablets) 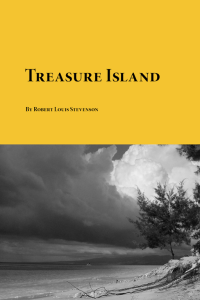 Treasure Island by Robert Louis Stevenson (for smartphones and tablets)

This masterpiece by Scottish novelist Robert Louis Stevenson (1850–1894) tells of the adventures of Jim Hawkins and his search for the buried treasure of an evil pirate, Captain Flint. The book is "both for and of all ages," says Stefan Beck in a review published in The Wall Street Journal. He writes: Stevenson's prose is a pleasure not only for its precision and grace but also for its ability to capture the ugly or uncanny. His descriptions of people—Black Dog, a "pale, tallowy figure wanting two fingers"; the Sasquatch-like maroon Ben Gunn; and of course Silver, "hopping about upon [his crutch] like a bird" and grinning from a "face as big as a ham"—bring them forth from the page before any has spoken a word. (File size: 985.8 KiB, EPUB format)