Fathoming the pain of piracy victims

On 7th June the remaining 11 crew of the MV Albedo finally tasted freedom after being held captive for 1,288 days by Somali pirates. No doubt, they’ll be sought out by journalists for interviews. An enteprising author might even write a book about their ordeal. But who, except the victims themselves, can ever fathom the pain and anguish they suffered and give justice to their story?

Because words are often not enough, we wish that an artist would someday paint the horrors of maritime piracy just as Pablo Picasso depicted the horrors of war in his “Guernica” (pictured above). Picasso’s mural was created in response to the 1937 German bombing of the Basque village of Guernica at the behest of Spanish Nationalist forces. But it is an iconic piece with a universal message. The same can be said of Edvard Munch‘s smaller painting entitled “The Scream” (pictured below), which is a compelling representation of fear and agonised suffering. 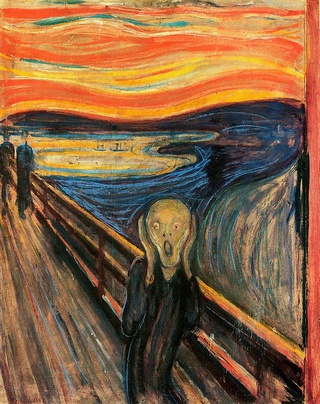 We’ve always believed that no great work of art is possible without the power of empathy. Both Picasso and Munch possessed that power to a large degree. We can’t all be artists but surely, as humans, we all have the capacity to emphatise and feel some connection with those who undergo suffering. Shouldn’t we exercise that power more often and be more human in the process? ~Barista Uno

The Malaysian-flagged containership “MV Albedo” with a crew of 23 was hijacked by Somali pirates on 26th November 2010. The ship was effectively abandoned by its owner soon thereafter. 1 Indian seafarer died in captivity. In July 2012, following a local campaign, a deal was struck for the release of the 7 Pakistani crew members on board and they returned home safely. In July 2013 the progressively unseaworthy vessel sank in a heavy storm. Subsequently 7 Bangladeshi, 2 Sri Lankan, 1 Indian and 1 Iranian seafarer were held hostage ashore, while the fate of 4 Sri Lankans on board at the time of the sinking remains unknown.

Credit for giving hope to the captives’ families goes to MPHRP (The Maritime Piracy Humanitarian Response Programme). This pan-industry alliance of shipowners, unions, welfare organisations and other groups extended moral, psychological and financial support to the families of the crew during the course of their lengthy ordeal.