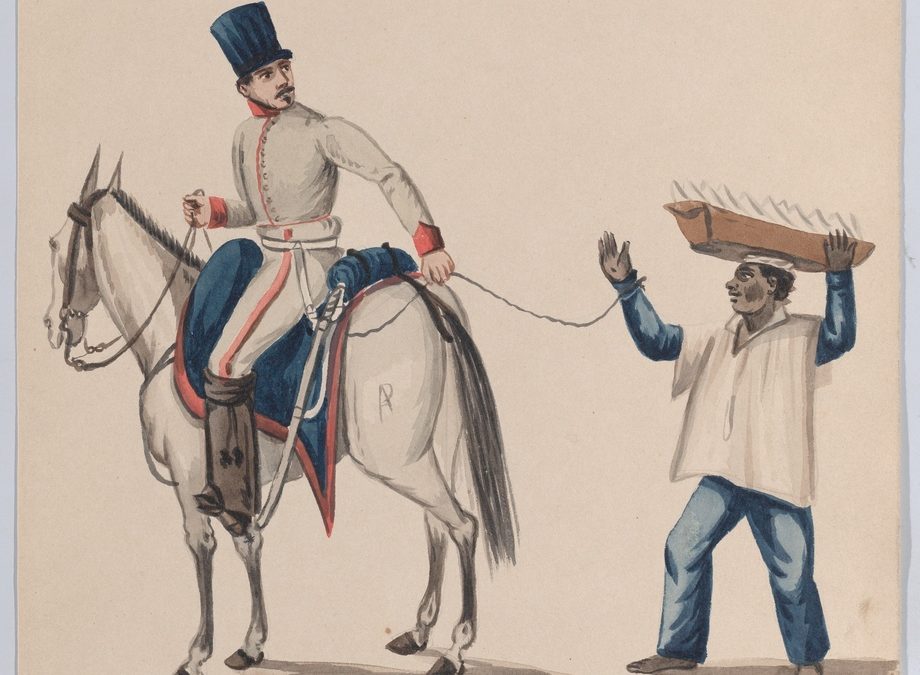 Most people will find it hard to imagine a maritime cadet being tied to a rope as shown in the circa-1848 watercolour drawing (pictured above) attributed to Afro-Peruviain painter Francisco (Pancho) Fierro. The indigenous slave is balancing a plate on his head as he follows a Peruvian soldier on horseback. However, the truth is that Filipino cadets are made to do things that are no less agregious as unpaid office workers and domestic sevants for the manning agencies and seafarer unions in Manila.

What could be more demeaning for a would-be ship officer than to be ordered by a secretary to go out and buy pizza for the company staff? Or to be made to wash dishes and clean the office toilet? Yet, many go through such indignities for the chance to go to sea and complete the 12-month shipboard apprenticeship required for graduation. It could be many months before they finally get the big break.

Anyone with an ounce of moral discernment will see that making cadets work without pay is not only exploitation. It is a form of slavery. Surprisingly, manning agents and even some seafarers find nothing wrong with this shameful practice. They say working for free in a crewing company or a seafarers’ union is voluntary on the part of the cadet. Moreover, the cadet can learn certain office skills he or she can later put to good use as a ship officer. Those who make such stupid arguments overlook or ignore two important points.

First, the cadets who serve as unpaid flunkeys are forced by circumstances to do so. They have very little choice. The International Convention on Standards of Training, Certification and Watchkeeping for Seafarers (STCW) requires aspiring officers to complete one year of apprenticeship at sea. Alternatively, they can join a vessel as able seaman, wiper or oiler. However, they will have to serve in these capacities for three years versus 12 months for an apprentice officer. That is assuming they can be hired in the first place.

Second, there is a huge difference between servitude and internship. The latter is a legitimate practice accepted around the world and in many professions. It enables the intern, who may or may not get paid, to gain some work experience or satisfy certain requirements for a qualification. Buying pizza for the office staff (some cadets to it whilst wearing their white cadet uniforms) can hardly be called internship.

Interestingly, cadets who are taken in as slave labour by manning companies are referred to as “utility”. The use of the term even by certain academics is very telling. Like the infamous buzzword the human element, it shows how language is used to objectify seafarers and rob them of their humanity. But what else can one expect in maritime Manila with its crass commercialism and decadent culture?