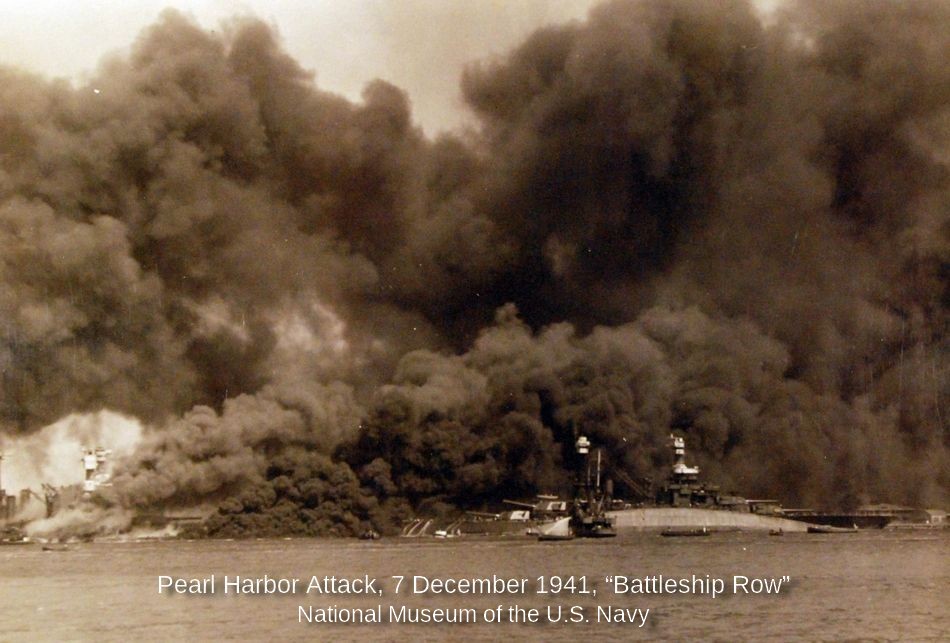 There are tonnes of photographs of the day (7th December 1941) the Japanese attacked Pearl Harbor. But there are vastly fewer comtemporary works of art depicting the historic event.

I searched far and wide on the internet. The US Library of Congress had only proganda posters and political cartoons about Pearl Harbor. I checked the leading American art museums. Only one had a relevant work, and it was propaganda art.

I find this odd. A total of 2,335 U.S. servicemen and 68 civilians were killed in the attack (click here for a breakdown of the casualties and losses). Several American warships were destroyed or damaged. The event was of great importance as it ushered in U.S. involvement in the war. Furthermore, works of art depicting famous naval battles abound in the art world. Why the dearth of contemporary art about Pearl Harbor?

Griffith Baily Coale was a combat artist on U.S. naval ships. This drawing is remarkable for its historical accuracy. The NHHC description of the work reads:

“This artwork … shows the destruction wrought on ships of the U.S. Pacific Fleet attacked in their berths by scores of enemy torpedo planes, horizontal and dive bombers on December 7, 1941. At the extreme left is the stern of the cruiser Helena, while the battleship Nevada steams past and three geysers, caused by near bomb misses, surround her. In the immediate foreground is the capsizing minelayer Oglala. The battleship to the rear of the Oglala is the California, which has already settled. At the right, the hull of the capsized Oklahoma can be seen in front of the Maryland; the West Virginia in front of the Tennessee; and the Arizona settling astern of the Vestal …, seen at the extreme right. The artist put this whole scene together for the first time in the early summer of 1944, from 1010 Dock, in Pearl Harbor, where he was ordered for this duty. Coale worked under the guidance of Admiral William R. Furlong, Commandant of the Pearl Harbor Navy Yard, who stepped from his Flagship, the Oglala, as she capsized. (quoted from the original Combat Art description).” 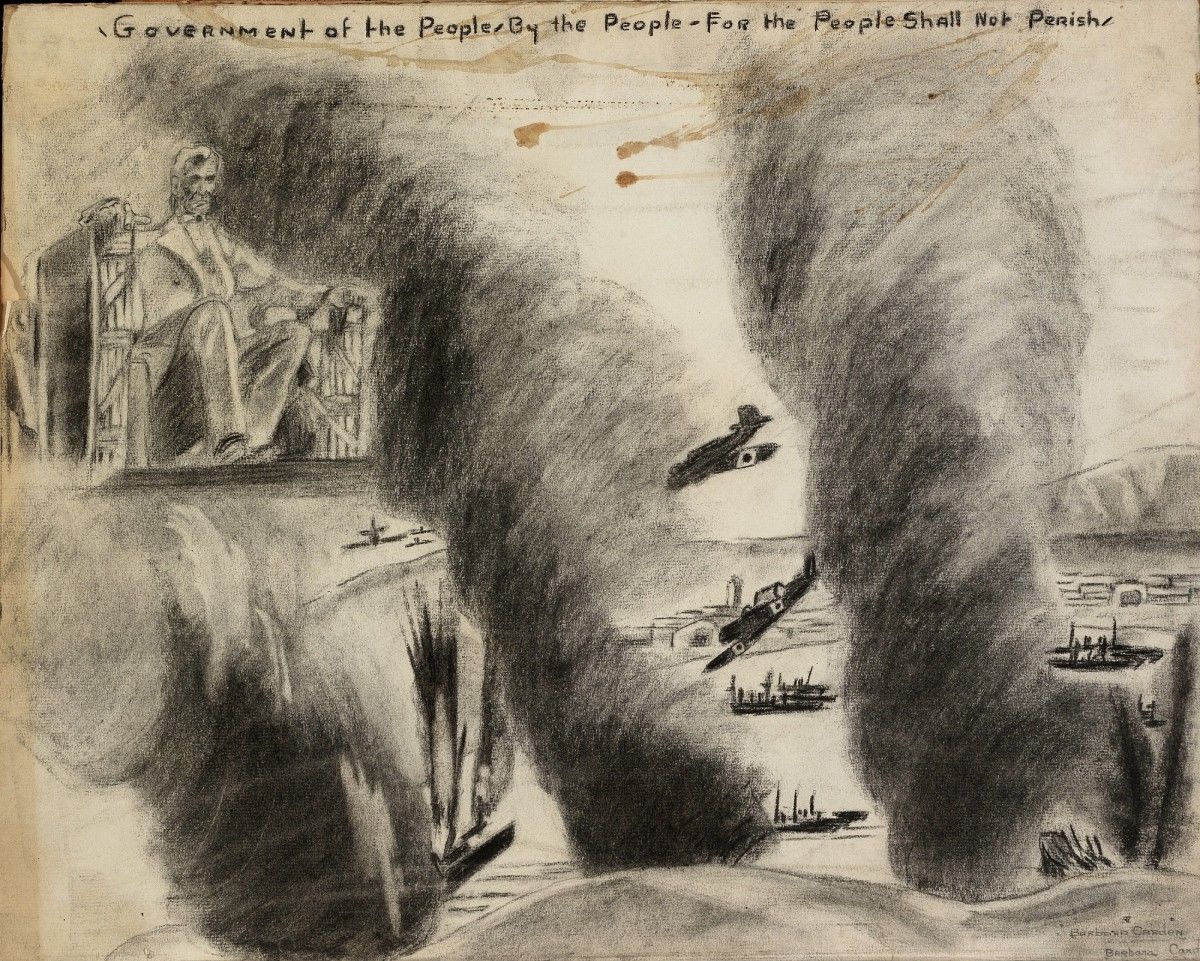 Remember Pearl Harbor, c. 1942
Charcoal on paper by Barbara Carden (American, active 1900–1999)
Courtesy of the Smithsonian American Art Museum
This image may be under copyright. It is published here under the Fair Use principle.

Barbara Carden’s drawing is obviously propaganda art. Although not noteworthy in terms of artistic merit, it is historically significant as it highlights the fact that the Japanese attack on Pearl Harbor galvanised the American people and bolstered their patriotic spirit. 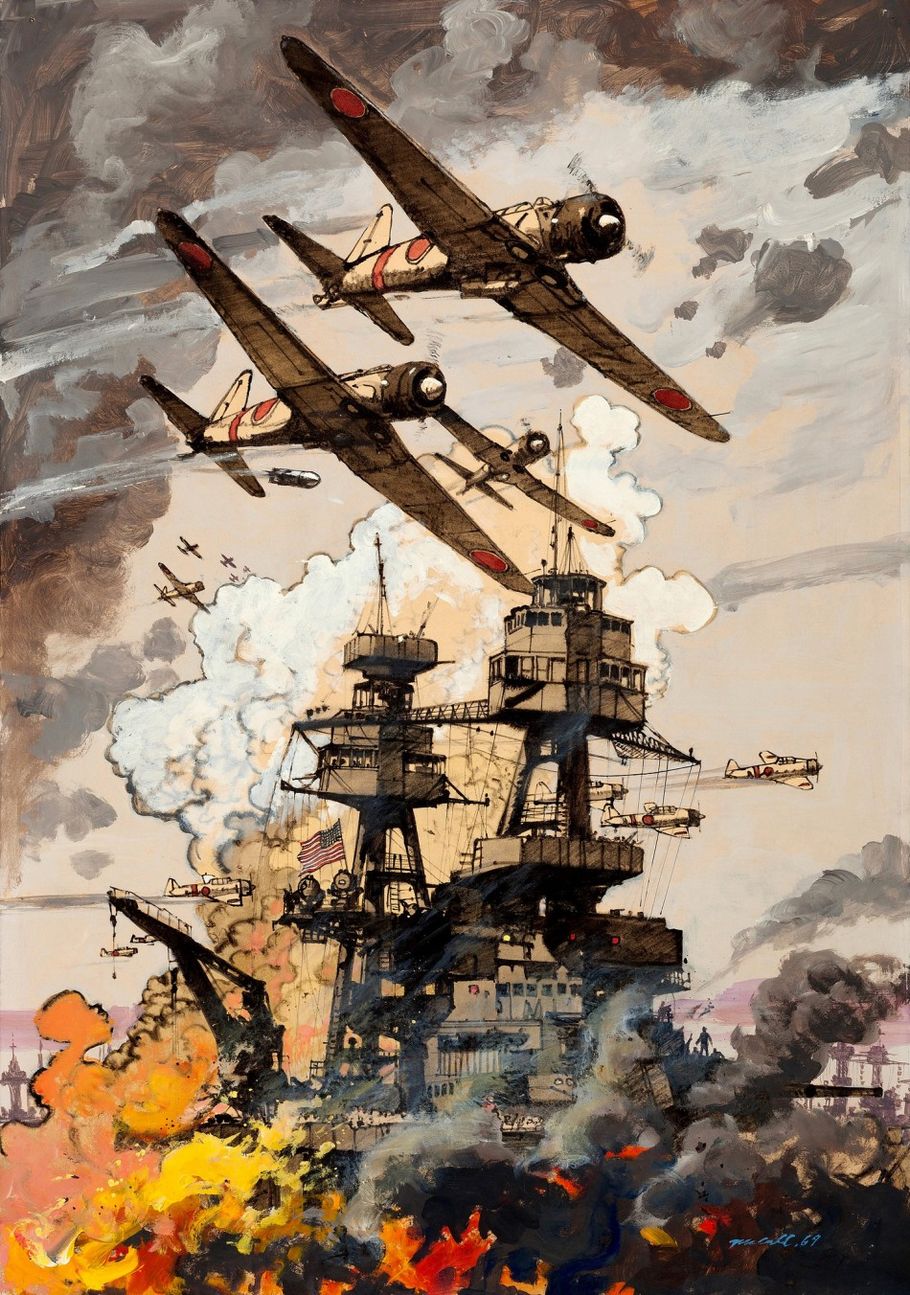 Robert McCall’s work depicts one of the battleships in Pearl Harbor’s “Battleship Row” under attack. As poster art, it is truly eye-catching. The fiery red and orange colours and the swarm of Japanese planes buzzing overhead make for a dynamic,  albeit frightening, scene. 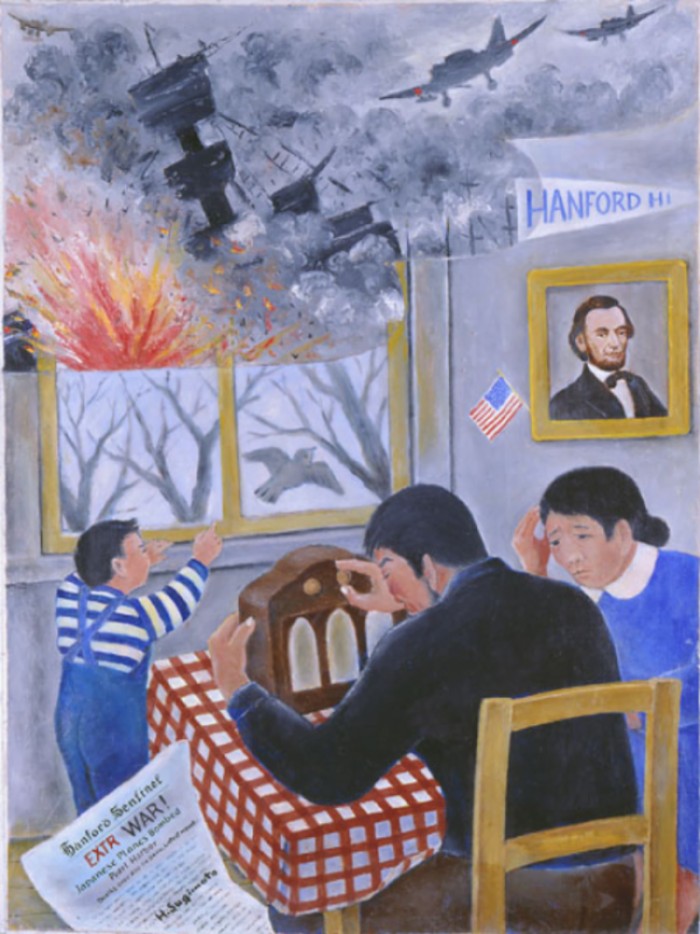 Untitled (News of Pearl Harbor), c. 1942
Oil on canvas by Henry Sugimoto (Japanese-American, 1900–1990)
Courtesy of the Japanese American National Museum via
the Online Archive of California

A Japanese couple in California listen anxiously to news about Japanese forces attacking Pearl Harbor. Their concern would turn out to be justified as thousands of Americans of Japanese descent — including the artist himself — would be interned in concentration camps by the U.S. Government during World War II. Adding an element of irony to the painting are the Japanese boy watching a bird fly and a portrait of Abraham Lincoln hanging on the wall. 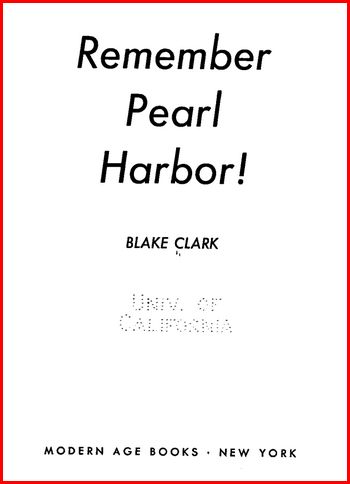