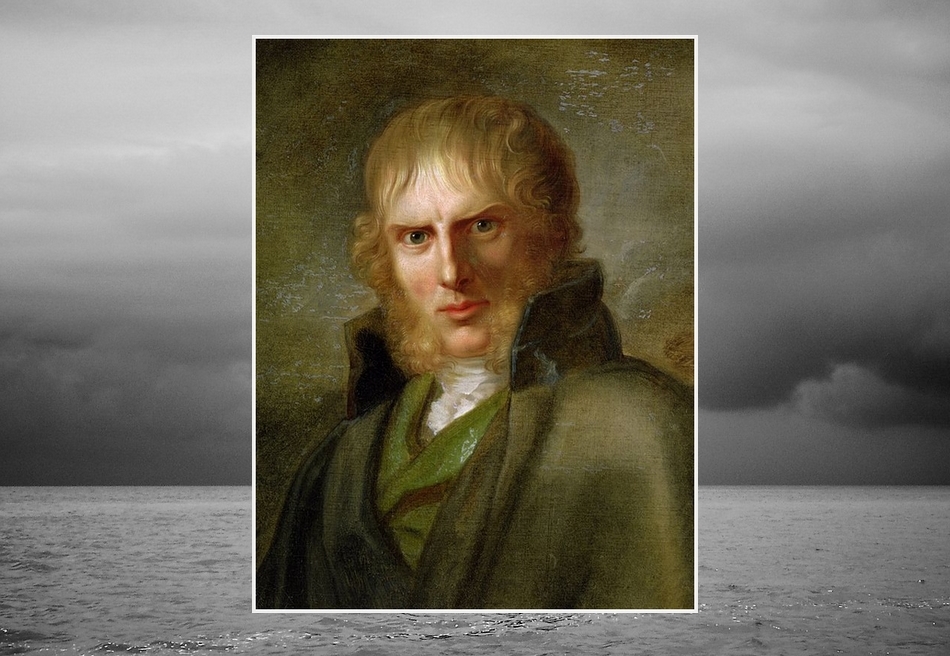 The art world has not run out of praise for the 19th-century German painter, Caspar David Friedrich (shown in the above inset, a portrait by fellow German artist Gerhard von Kügelgen). Perhaps it never will. Peter Schjeldahl, art critic of The New Yorker magazine, had this to say about a 2001 Friedrich exhibit at The Metropolitan Museum of Art in New York:

The pictures don’t give; they take. Something is drawn out of us with a harrowing effect, which Friedrich’s use of color nudges toward intoxication… One doesn’t so much look at a Friedrich as inhale it, like nicotine. Friedrich is an artist of dusky fire, of twilight that sears. It is well worth sticking around for his shuddery pleasures, laced with something cold and weird. (‘Inspired Lunacy’, The New Yorker, 1st October 2001 issue)

Friedrich’s art has the capacity to more than intoxicate. It evokes a sense of the sublime. No picturesque landscapes for this artist. He goes beyond what is beautiful in nature. He takes us from land to sea to sky, ushering us into the realm of the sublime — that which is great and immense beyond comparison and before which we experience a feeling of awe that borders on the religious. The following visual compositions by Friedrich show why he has been called Germany’s greatest Romantic artist. 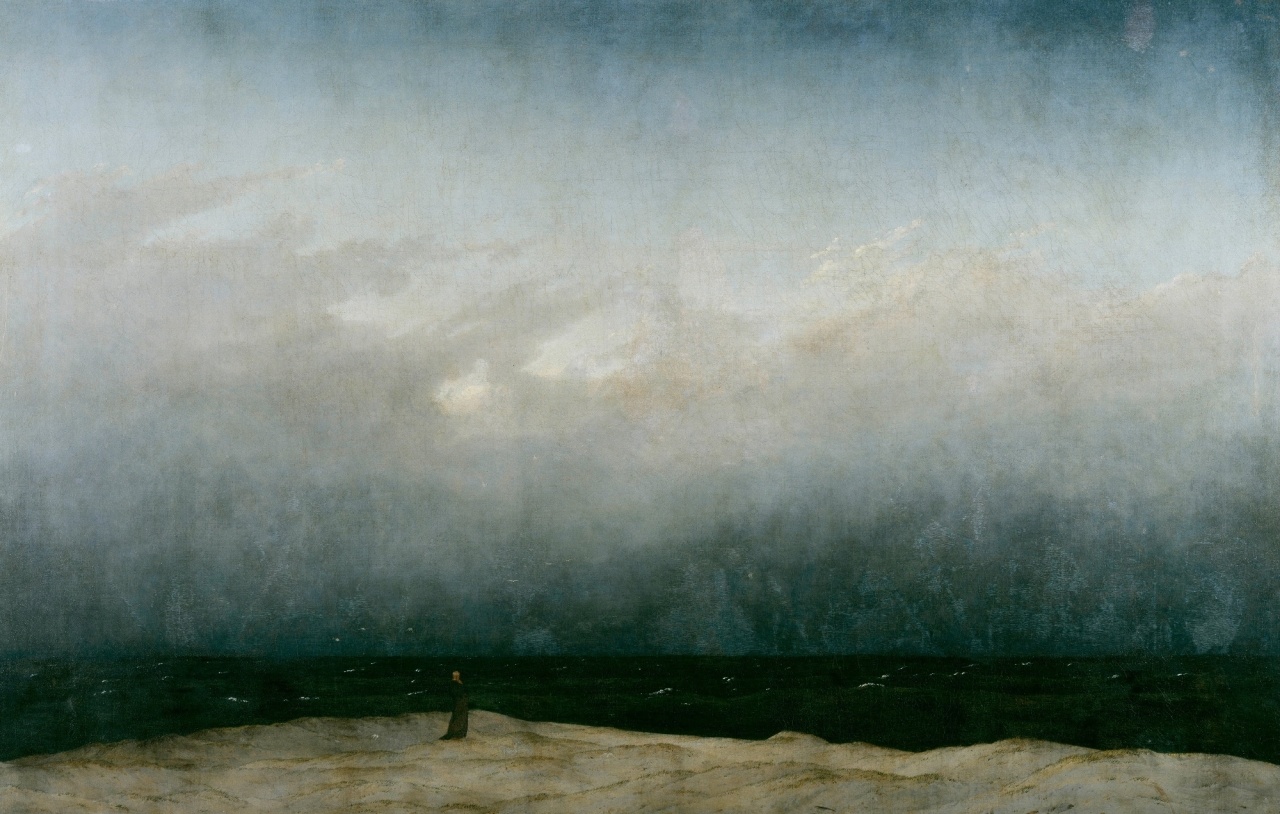 One of Friedrich’s most famous paintings, The Monk by the Sea (Der Mönch am Meer), is also one of his most enigmatic. Could the tall figure with the Teutonic blond hair standing on the shore like the trunk of a barren tree be the artist himself? What is the monk thinking about as he gazes out to the dark sea? We shall never know. Interestingly, the foreground consisting of land and water occupies only a fifth of the canvas. The rest is all sky. Friedrich seems to be suggesting that there is something greater and loftier than man and nature. 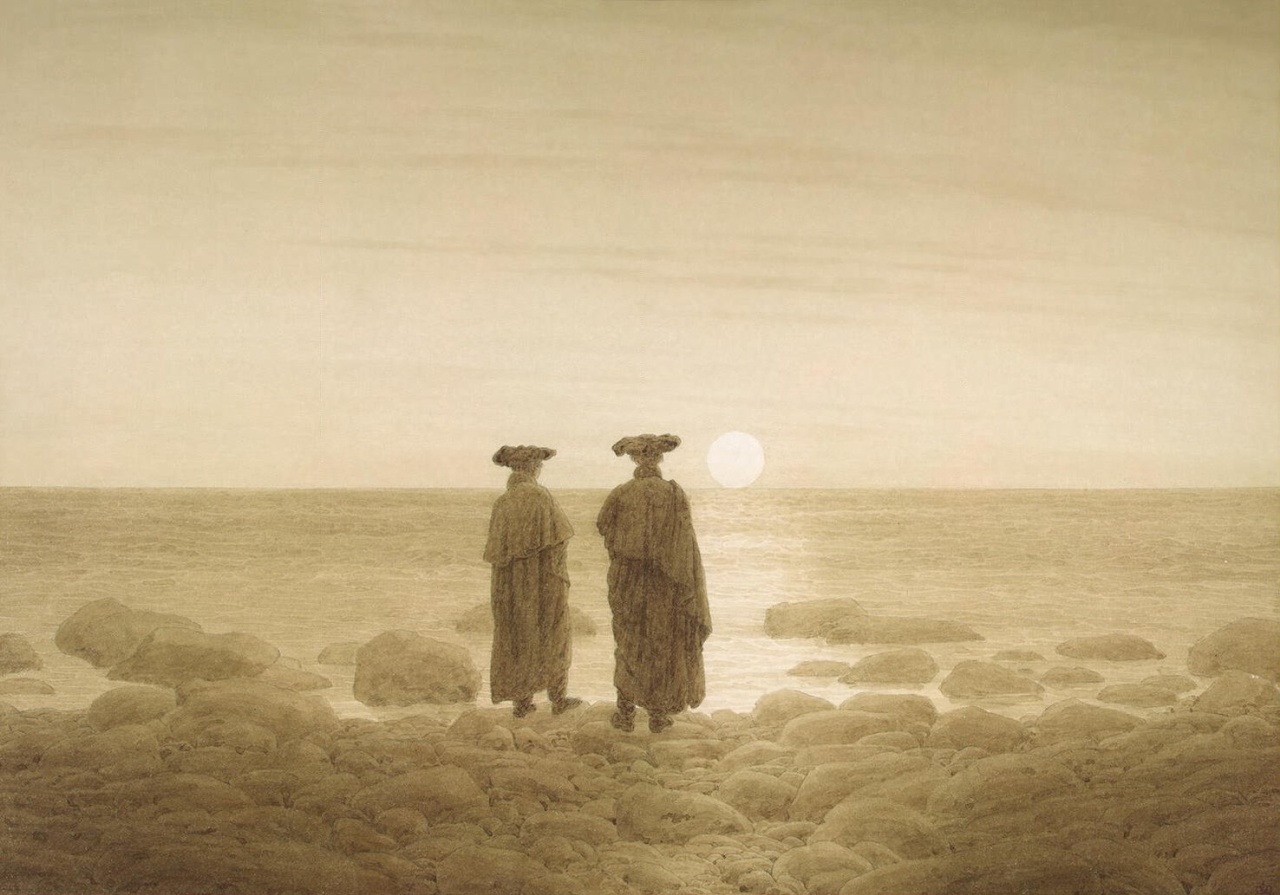 For Friedrich, nature was not only an object for artistic contemplation. It was a vehicle for communing with the divine. In this sepia ink and pencil drawing, the entire scene is bathed in lambent light. It is beautiful but mysterious. The two men seem to be frozen in awe as they gaze at the rising moon, their backs turned towards the viewer. It is a subtle invitation to take part in a  transient encounter with the sublime. 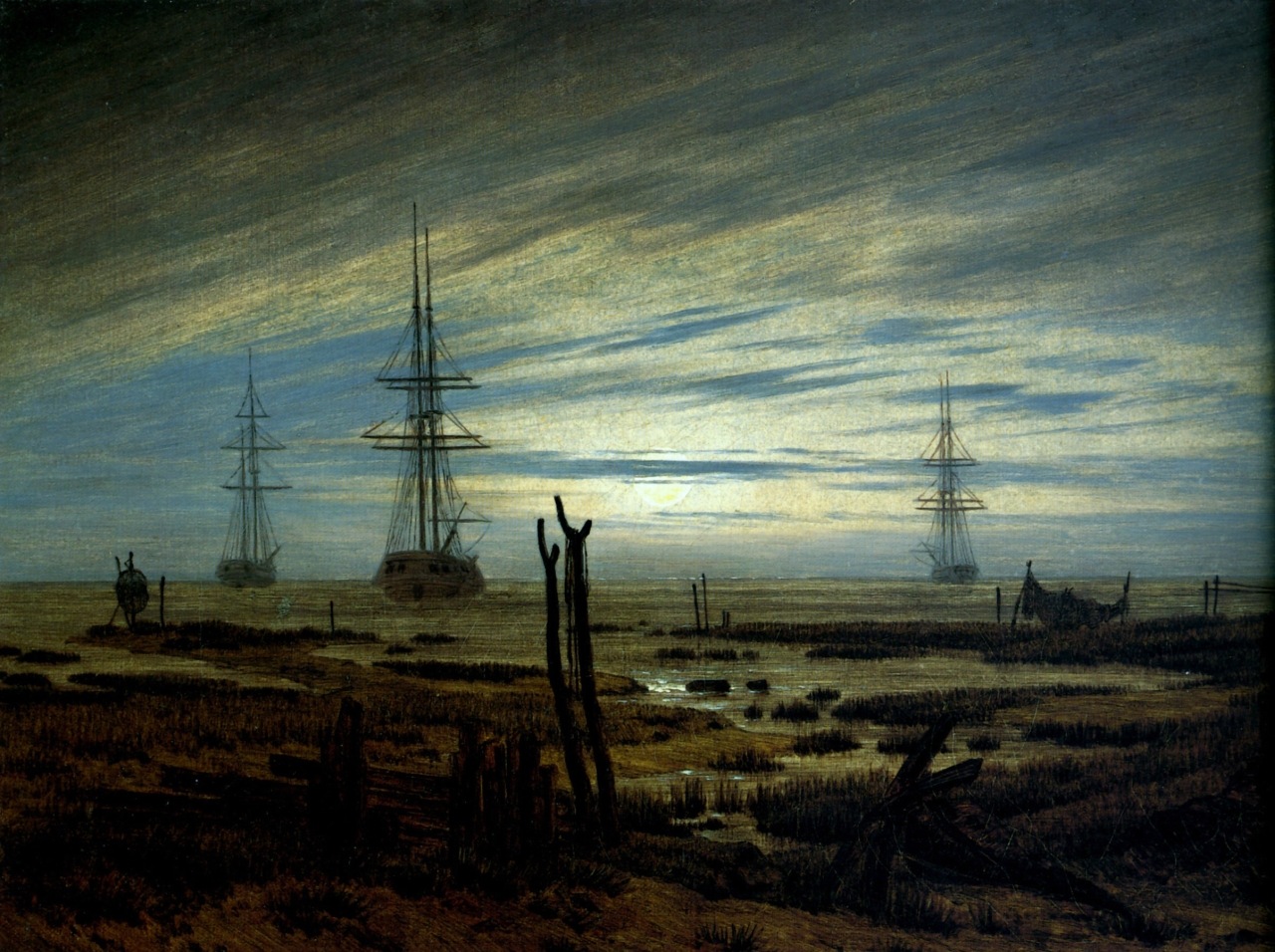 Like many of Friedrich’s works, Ships in the Roadstead (Schiffe auf der Reede) shows a fascination with death and decay. The stark silhouttes of three sailing ships call to mind the crucifixion of Jesus Christ in Calvary. Adding to the religious overtone is a full moon that lights up part of the sky in the background. To the believer, there is life after death. 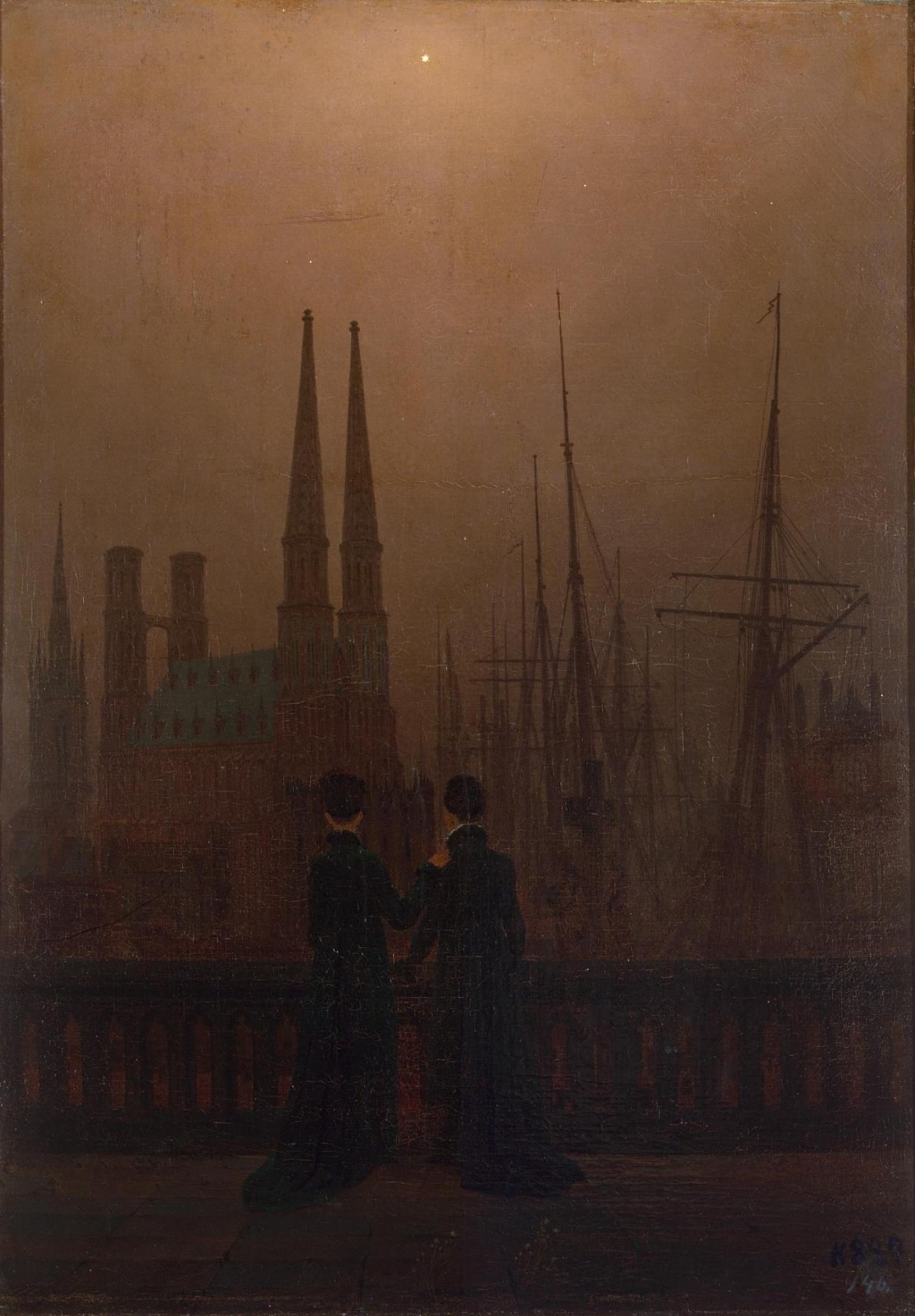 Night in the Harbour / Sisters (Nacht im Hafen / Schwestern) is an intriguing piece. Two sisters are standing on a balcony overlooking the harbour. The woman on the left has her right hand resting on the shoulder of her sister. Is she trying to comfort her? In the background are the silhouttes of a cathedral and the masts of ships that stand erect like sentinels on watch. A small dot of a moon at the top of the canvas provides the only light to the sombre landscape. 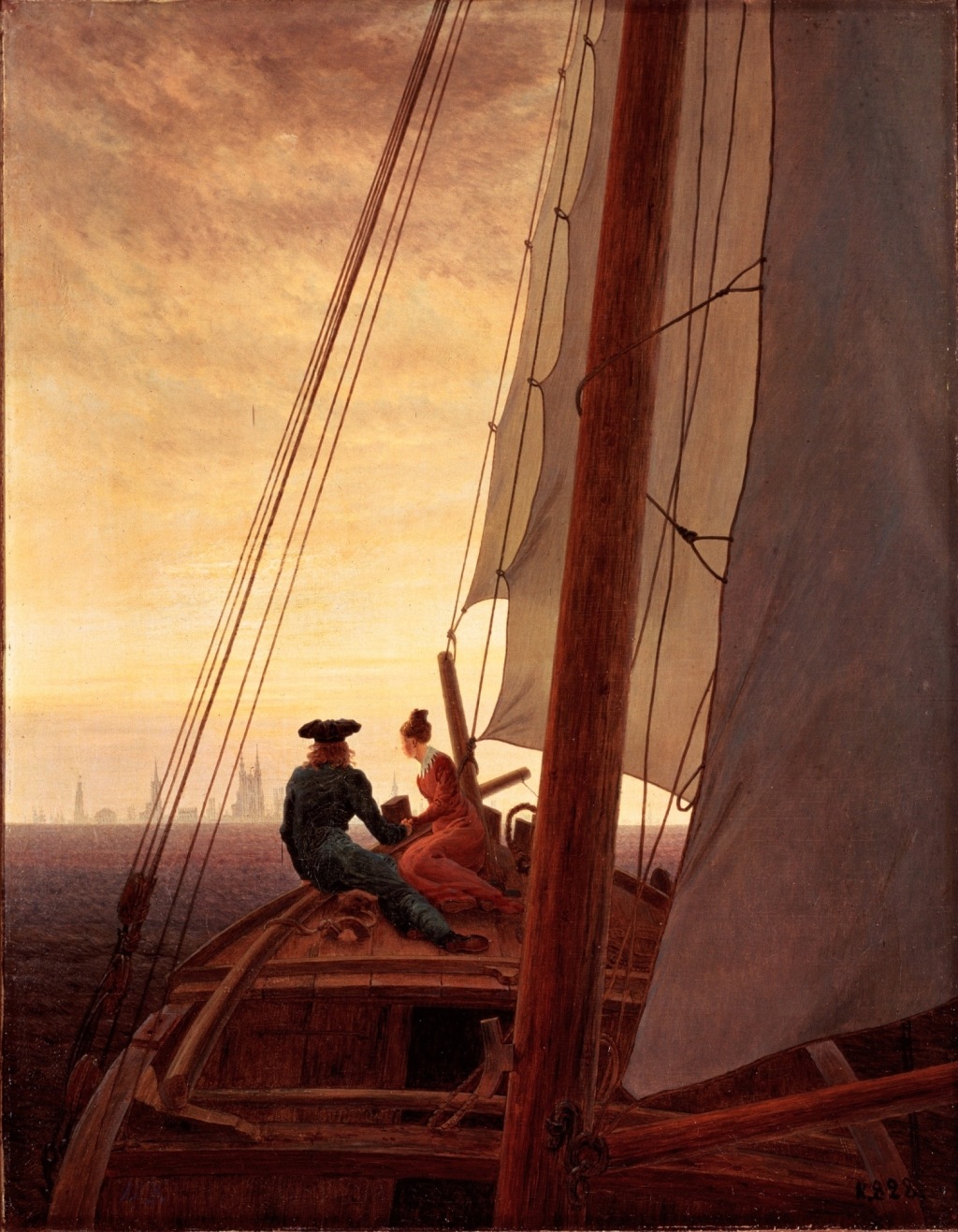 The image of a couple holding hands on a sailing vessel can easily give rise to a cheesy, hackneyed painting. In On a Sailing Ship, Friedrich avoids sentimentalism and elevates the subject to the level of sublime art. Like the two men on the shore in Moonrise (Mondaufgang), the man and woman in this painting are facing the horizon. Somehow we get the sense of being on the same boat with them. We find ooutselves seated behind the mast near the stern on a homeward journey.