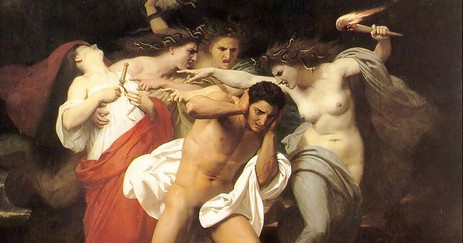 The Remorse of Orestes, oil painting by William-Adolphe Bouguereau, 1862

We see that everyone is villifying Captain Lee Jun-seok of the ill-starred MV Sewol. And rightly so. The man was one of the first to leave the South Korean ferry for safety in violation of the time-honoured maritime principle that the captain goes down with the ship. He was a coward, an utter disgrace to his profession. For all this, it cannot be denied that Captain Lee expressed remorse when he was arrested and he did apologise.

Captain Lee’s demeanor was in stark contrast to the cockiness and flamboyance displayed by Captain Francesco Schettino, who was likewise quick to abandon the Costa Concordia when it ran aground on 13th January 2012. His apology has done nothing to assuage the anger and anquish of the families affected. Much less will it resurrect those killed in the 16th April 2014 disaster (212 dead and 90 others still missing as of 30th April). But it comforts us to know that there has been, in the aftermath of the MV Sewol tragedy, a deep sense of individual and national shame.

On 27th April Prime Minister Chung Hong-won announced his resignation, taking responsibility for the Government’s slow initial response to the sinking of the MV Sewol. Two days later, President Park Geun-hye apologised over the ferry disaster in a statement to her cabinet shown on national television. Would the officialdom and ship captains of other countries react in the same fashion if faced with a similar tragedy? Perhaps. To feel shame and remorse implies a sense of responsibility and a sense of honour. ~Barista Uno