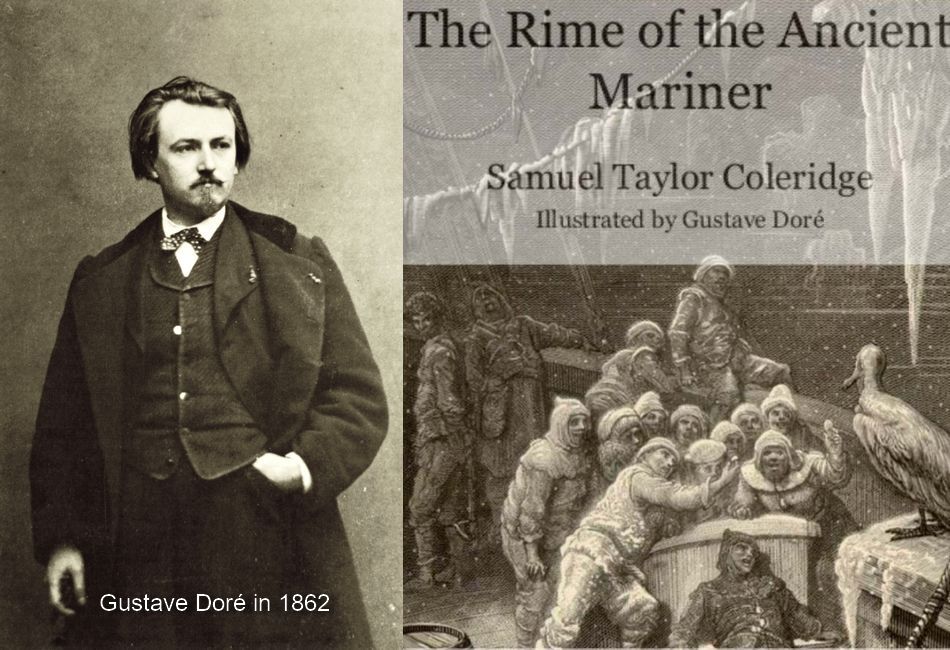 Read more about the life and works of Gustave Doré here.

The 38 wood engravings this French book illustrator made for the 1876 edition of ‘The Rime of the Ancient Mariner’ are mind-blowing. They are noteworthy not only for their fine detail. They convey an atmosphere that greatly enhances the verses. Doré’s ultimate achievement in these illustrations has been to put flesh on the intense emotions which Coleridge depicted in the poem — fear, anxiety, panic, hope, anguish and remorse. The following sample artworks from each of the poem’s seven parts show a perfect marriage of poetry and art: 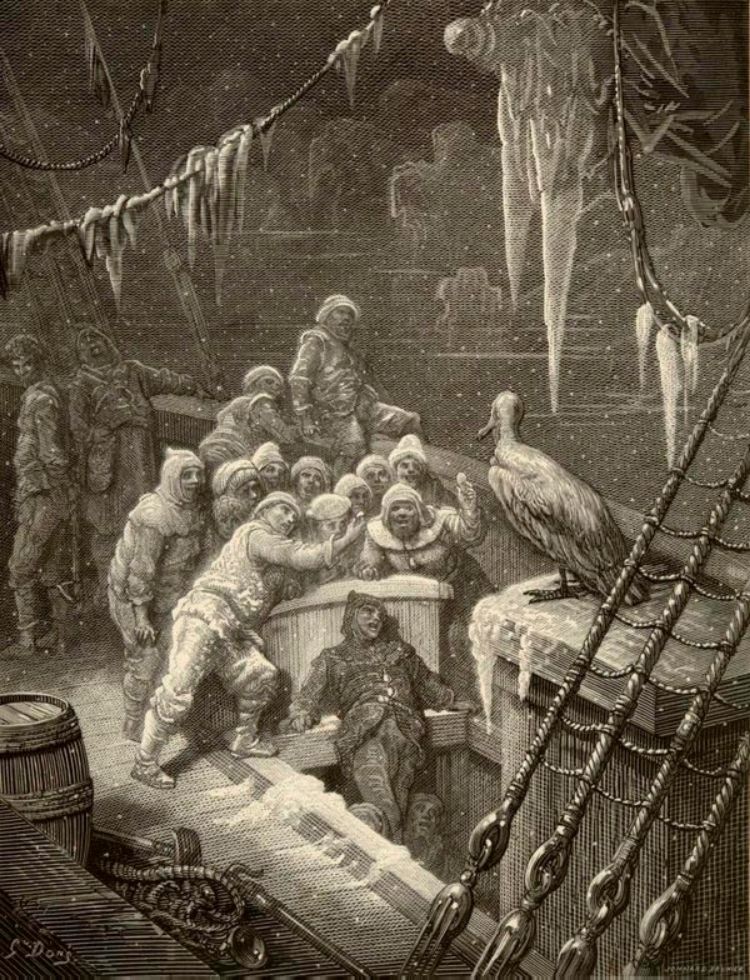 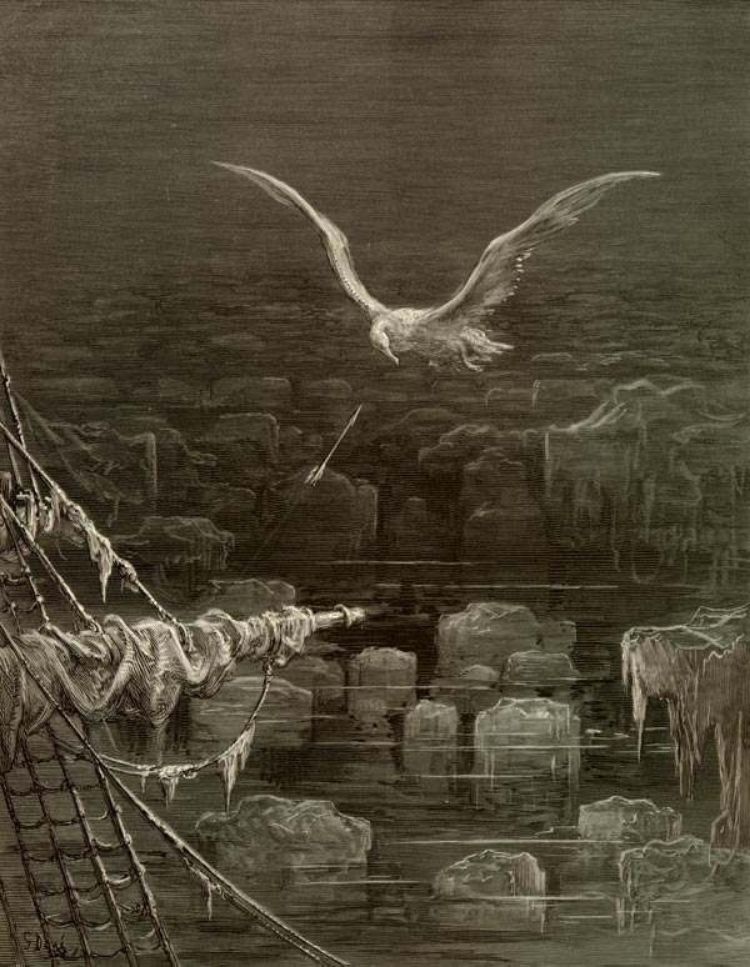 And a good south wind sprung up behind;
The Albatross did follow,
And every day, for food or play,
Came to the mariners’ hollo!

In mist or cloud, on mast or shroud,
It perched for vespers nine;
Whiles all the night, through fog-smoke white,
Glimmered the white Moon-shine.

“God save thee, ancient Mariner!
From the fiends, that plague thee thus! —
Why look’st thou so?”— With my cross-bow
I shot the ALBATROSS. 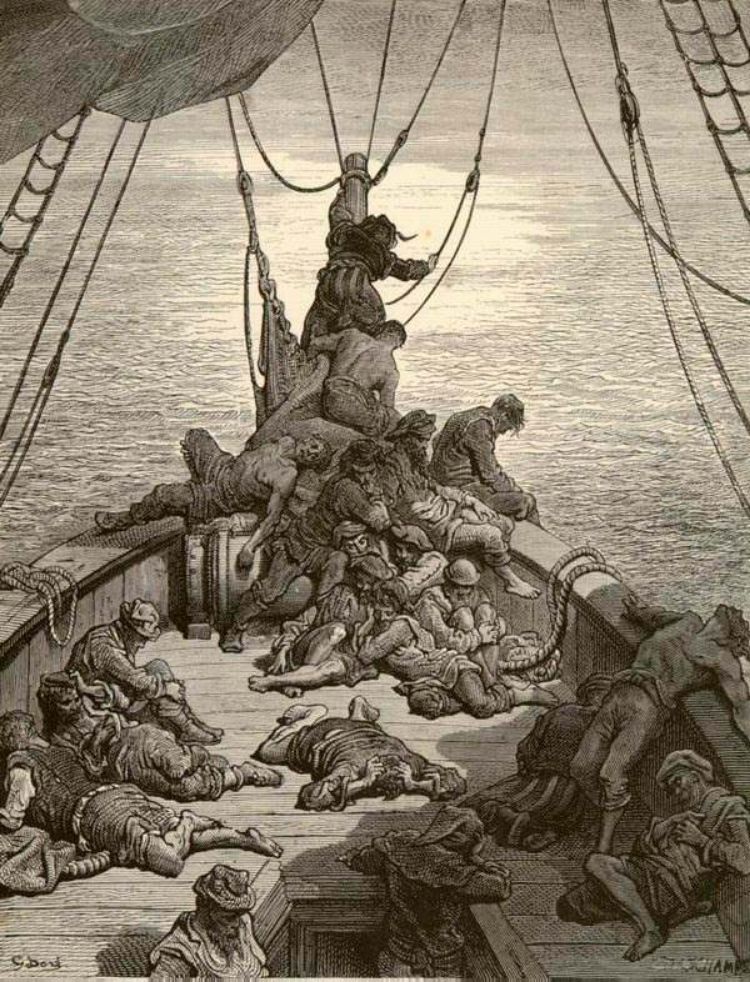 The very deep did rot: O Christ!
That ever this should be!
Yea, slimy things did crawl with legs
Upon the slimy sea 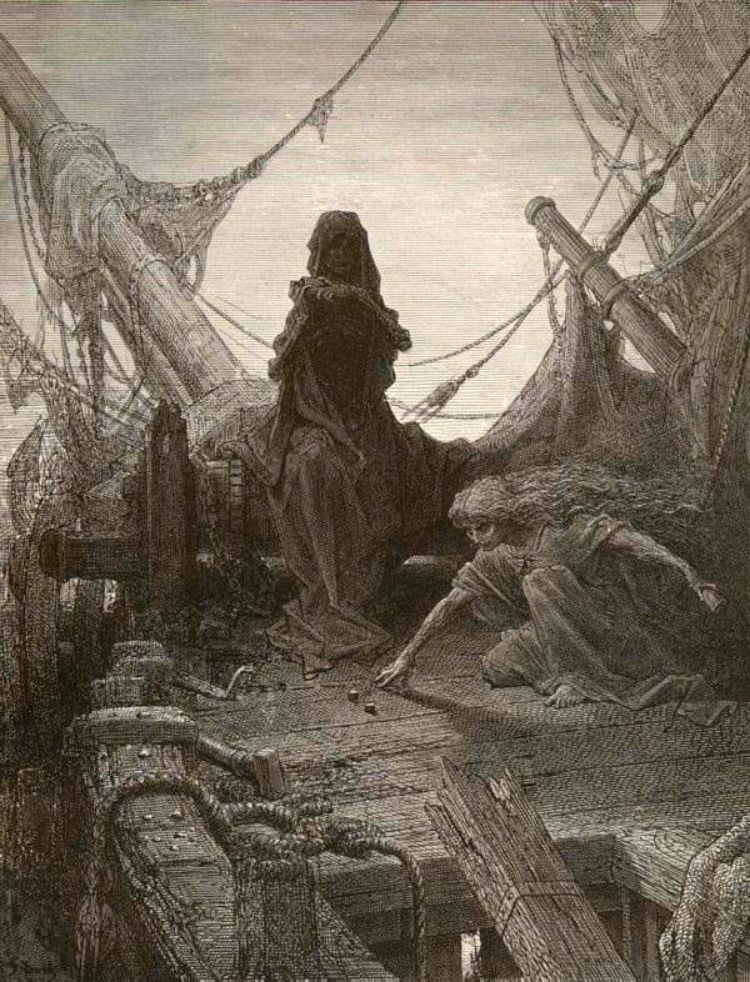 Are those her ribs through which the Sun
Did peer, as through a grate?
And is that Woman all her crew?
Is that a DEATH? and are there two?
Is DEATH that woman’s mate?

Her lips were red, her looks were free,
Her locks were yellow as gold:
Her skin was as white as leprosy,
The Night–Mare LIFE-IN-DEATH was she,
Who thicks man’s blood with cold.

The naked hulk alongside came,
And the twain were casting dice;
“The game is done! I’ve won! I’ve won!”
Quoth she, and whistles thrice. 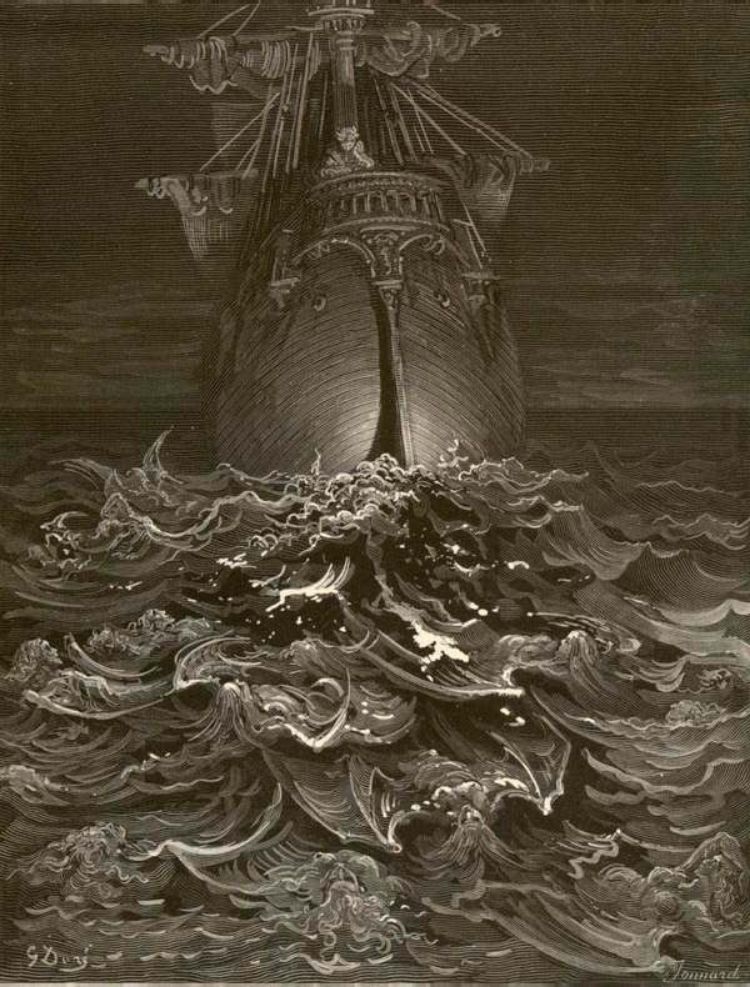 I looked to Heaven, and tried to pray:
But or ever a prayer had gusht,
A wicked whisper came, and made
my heart as dry as dust. 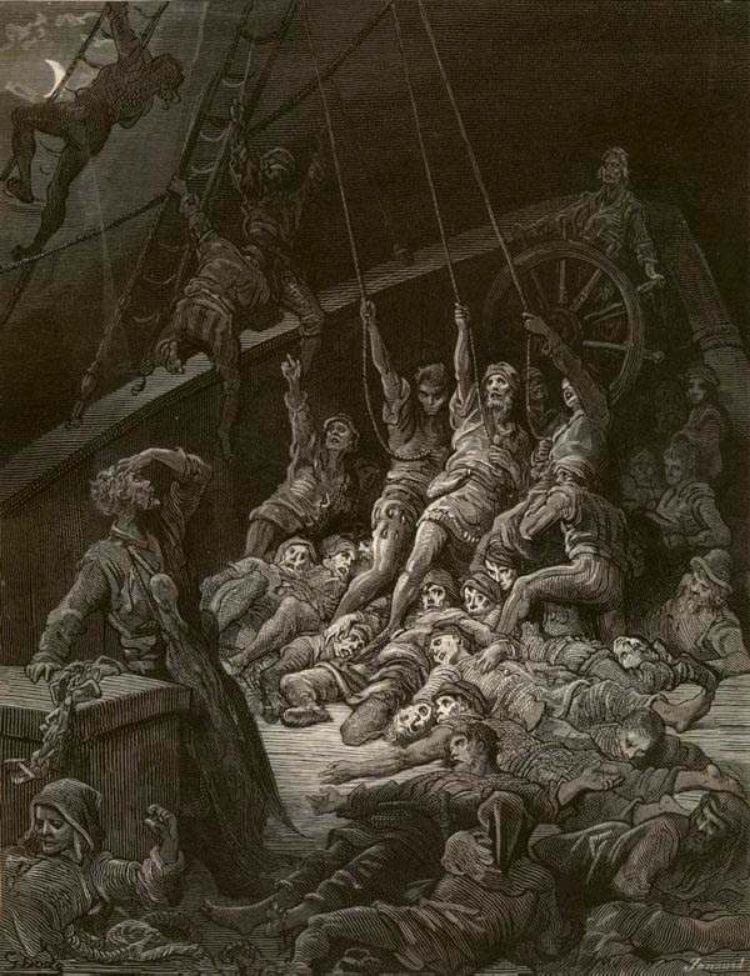 They groaned, they stirred, they all uprose,
Nor spake, nor moved their eyes;
It had been strange, even in a dream,
To have seen those dead men rise.

The helmsman steered, the ship moved on;
Yet never a breeze up blew;
The mariners all ‘gan work the ropes,
Where they were wont to do:
They raised their limbs like lifeless tools —
We were a ghastly crew. 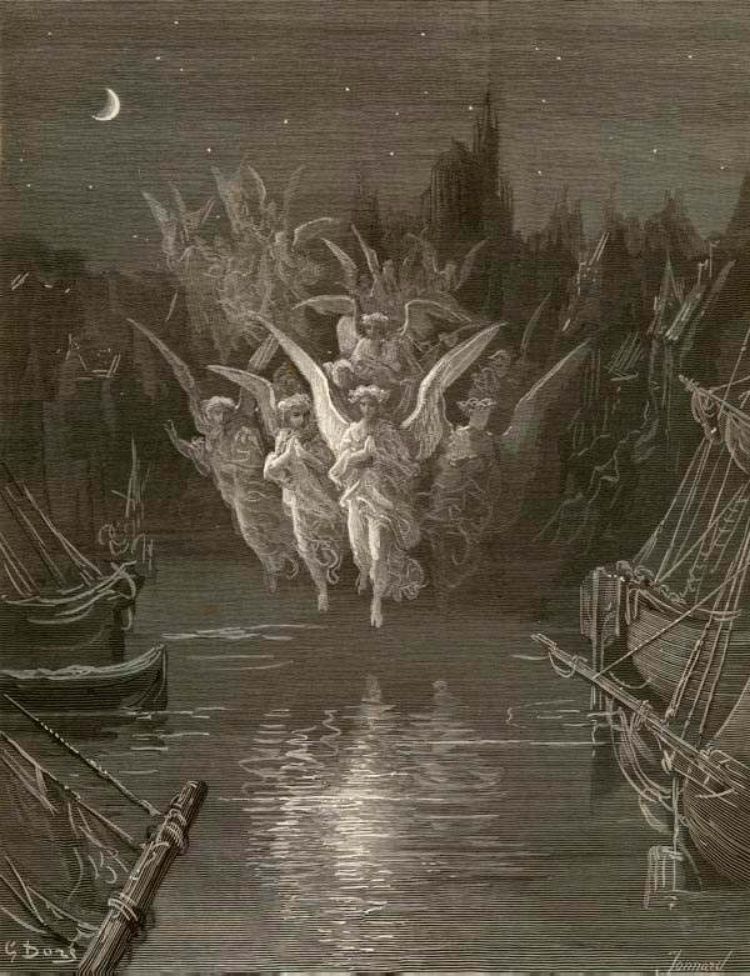 And the bay was white with silent light,
Till rising from the same,
Full many shapes, that shadows were,
In crimson colours came.

A little distance from the prow
Those crimson shadows were:
I turned my eyes upon the deck —
Oh, Christ! what saw I there! 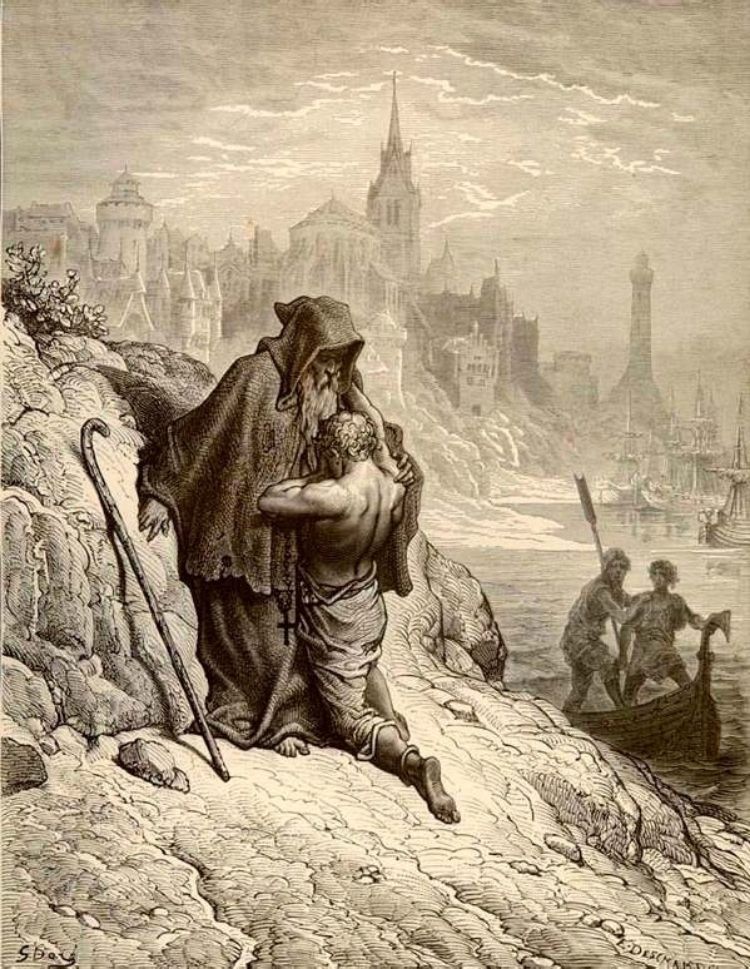 “O shrieve me, shrieve me, holy man!”
The Hermit crossed his brow.
“Say quick,” quoth he, “I bid thee say —
What manner of man art thou?”

Forthwith this frame of mine was wrenched
With a woeful agony,
Which forced me to begin my tale;
And then it left me free.

Since then, at an uncertain hour,
That agony returns;
And till my ghastly tale is told,
This heart within me burns. 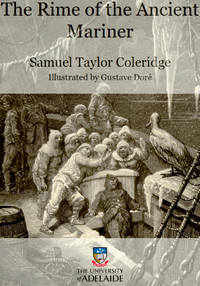