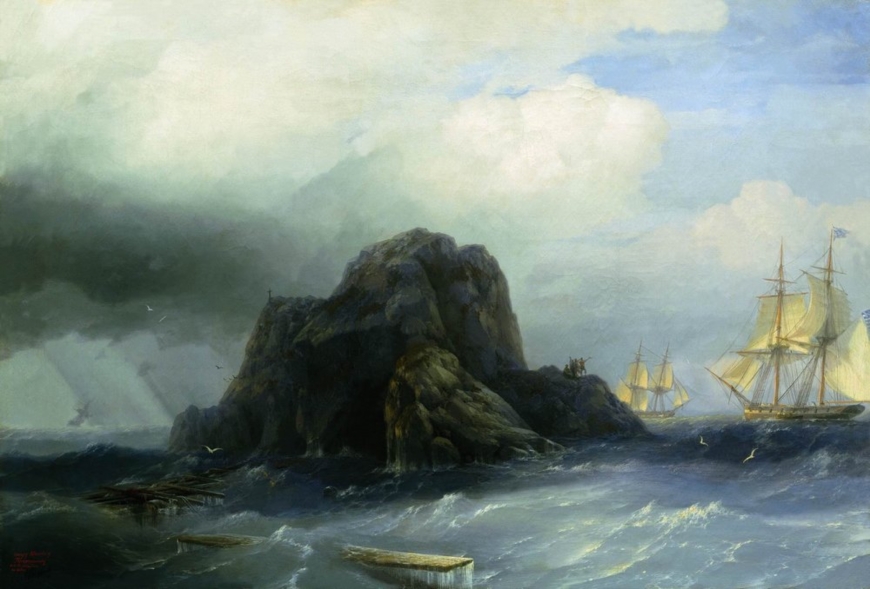 The maritime establishment — the groups that exercise power and influence over industry policy and opinion — is not only as resistant to change as the rock in Ivan Aivazovsky‘s 1885 painting ‘Rocky Island’ (pictured above). It is also often regarded as sacrosanct. As a result, any criticism of the system is likely to draw disdain and anger from those being criticised. Sometimes the reaction is one of silence, which may be a subtle form of disdain.

But it is not only the establishment that a maritime commentator is up against. A more basic problem is dealing with old customs and old ways of thinking. I’m surprised, for instance, that some folks still don’t get the difference between blogging and traditional journalism. Not too long ago, a British chap commented, half in jest and half in earnest, that Marine Café Blog was a “purveyor of opinions”.

That was a very silly thing to say. What else would a blog purvey or sell except the writer’s own personal views? My reply was short and sweet: “Better a purveyor of opinions than a purveyor of lies and IMO (International Maritime Organization) slogans.”

So why do I go on writing, knowing that what I write might be misunderstood or that it could displease some readers, especially if it raps the maritime establishment? The reason is simple, and it was elegantly expessed by Joseph Conrad, the great Polish-British writer, in his 1897 novel, The Nigger of the ‘Narcissus’:

My task which I am trying to achieve is, by the power of the written word, to make you hear, to make you feel — it is, before all, to make you see. That — and no more, and it is everything. If I succeed, you shall find there according to your deserts: encouragement, consolation, fear, charm — all you demand; and, perhaps, also that glimpse of truth for which you have forgotten to ask.

I have adopted Conrad’s manifesto as my own. It speaks not only of humility as a necessary element in the craft of writing — but of faith in the ability of humans to see, to inquire and perchance to change. ~Barista Uno