The Song of the Volga Boatmen: Hail to the human spirit 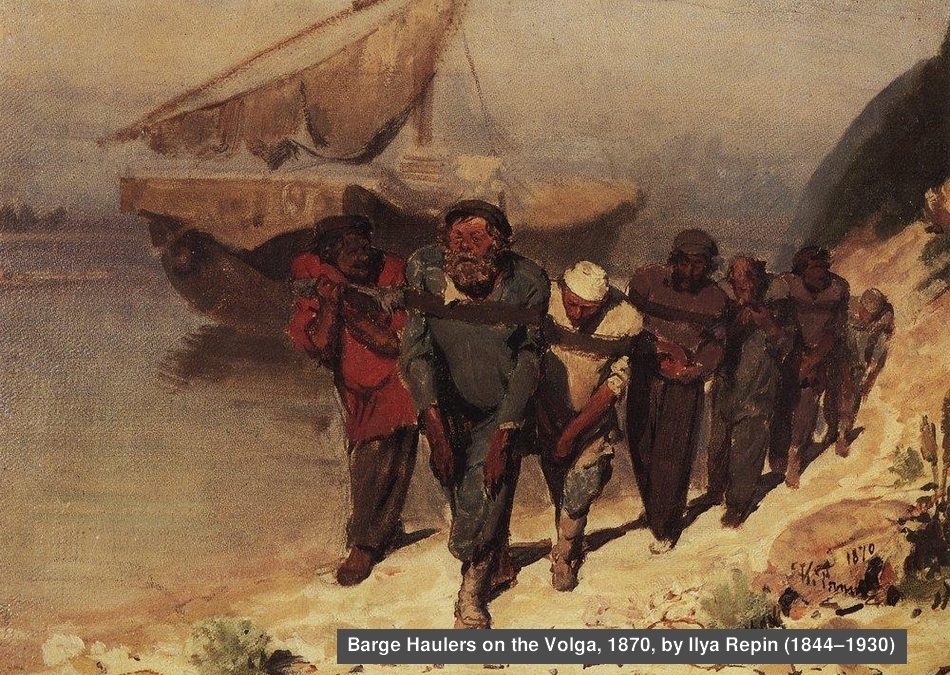 One need not be Russian to be moved by The Song of the Volga Boatmen (‘Eh, Ukhnem!’ to the Russians or ‘Yo, Heave Ho!’). This well-known traditional song was originally sung by burlaks, the men who pulled barges upstream in the old Russia. The melody may seem stern and gloomy, which somehow reinforces the Western stereotype of the Russian people as dour and cheerless. But the song also has a triumphant, martial air as exuded by the folllowing lyrics:

The song is a tribute, not only to the stout-hearted burlaks, but also to the great and historic Volga River:

Click here to read the complete lyrics in Russian and English.

It is a tribute as well to the gritty spirit of the Russian people and their capacity to endure hardships and make sacrifices — qualities displayed in abundance during the Great Patriotic War against Nazi Germany. However, the song’s appeal goes beyond its nationalist bearings, for it is really a celebration of the human spirit. Hearing it, one may be reminded of what American novelist William Faulkner said in his 1950 Nobel Prize for Literature acceptance speech:

“I believe that man will not merely endure: he will prevail. He is immortal, not because he alone among creatures has an inexhaustible voice, but because he has a soul, a spirit capable of compassion and sacrifice and endurance.”

Watch and listen to the following renditions of The Song of the Volga Boatmen. The first is a stunning live performance by Russian bass-baritone singer Leonid Kharitonov (1933–2017). The second is a contemporary lyrical version by Moscow Nights, a critically acclaimed trio from Russia.

The Song of the Volga Boatmen by Leonid Kharitonov and The Red Army Choir (Live) Tchaikovsky Hall, Moscow, 1965

The Song of the Volga Boatmen by Moscow Nights

Side Note: The painting shown above was one of several works by Ukrainian-born Russian artist Ilya Repin (1844–1930) which depict the Volga bargemen. In 1870 Repin went to the Volga River and made a number of sketches that formed the basis for the series, includng his three-years-in-the-making masterpiece, ‘Barge Haulers on the Volga’.