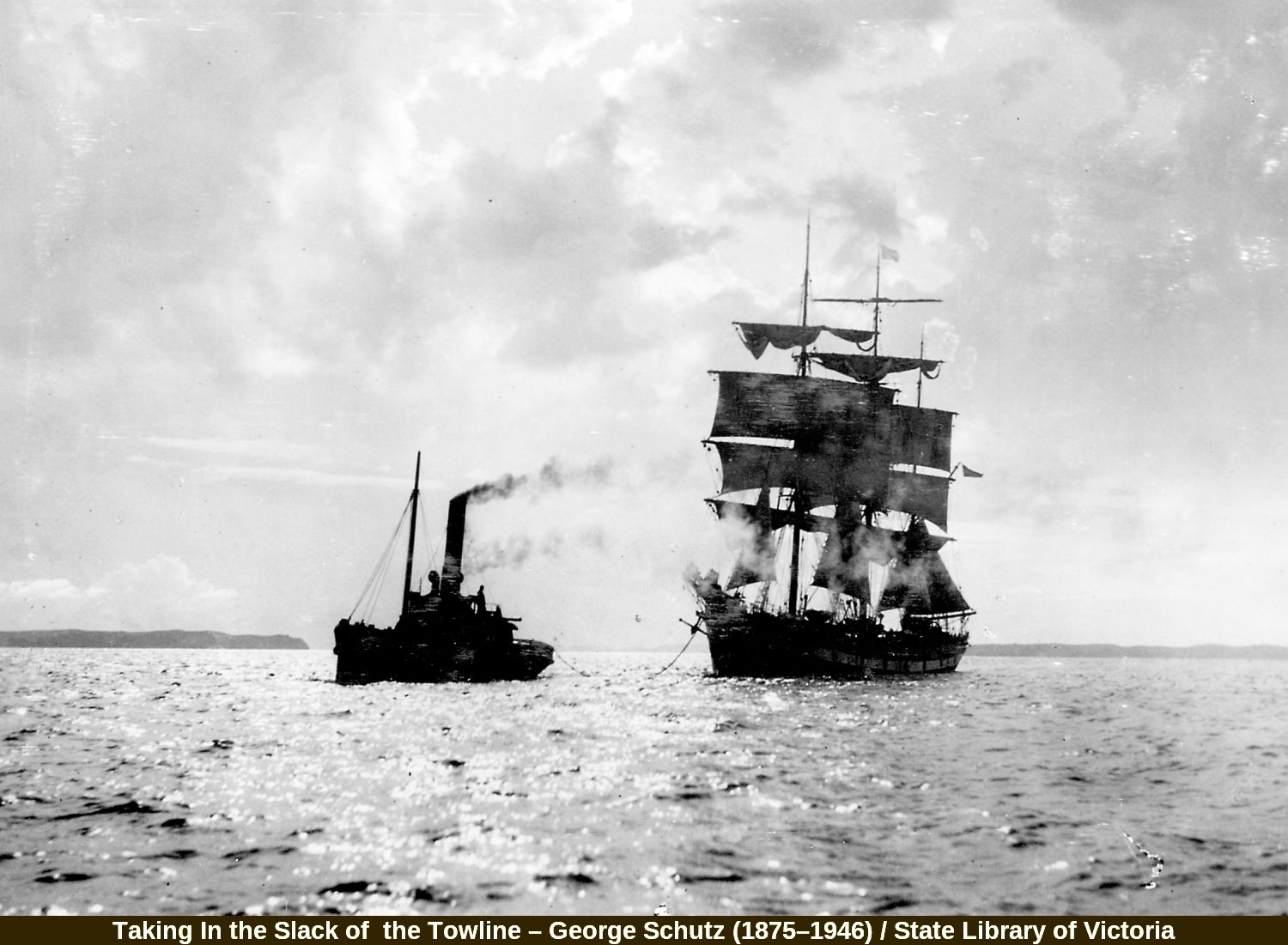 Men who are obsessed with manliness can learn a lesson from tugboats. These mean little machines are capable of pulling ships and barges that are many times their size. They can navigate through narrow canals and shallow waters. Their power and adroitness more than make up for their relative lack of bulk. The best tugboat, however, is a wimp on the water without an experienced skipper at the helm. It all boils down to how one uses the power available. 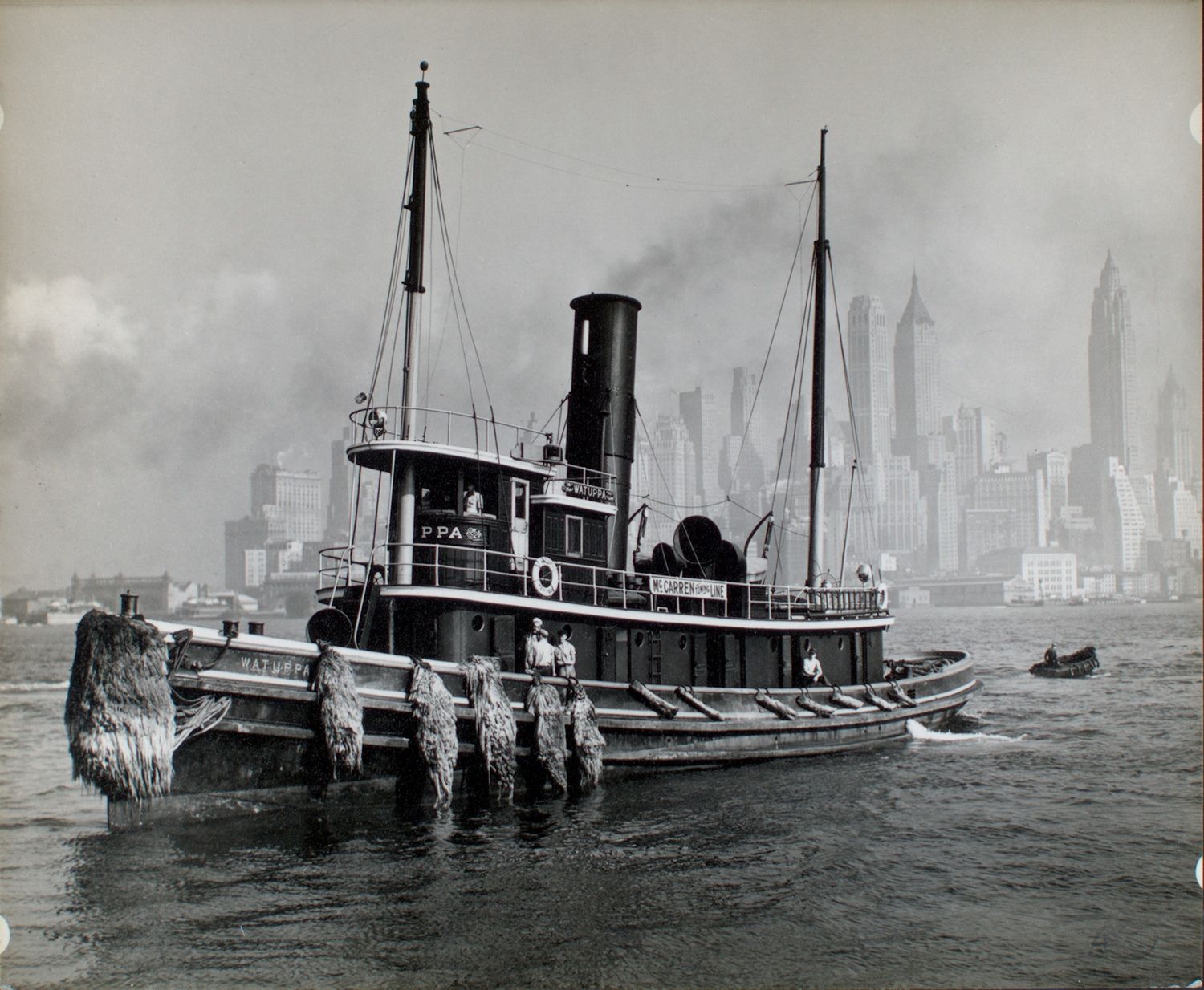 American photographer Berenice Abbott is best known for documenting New York City’s people and landscape in the second half of the 1930s. Her photo of the tugboat Watuppa with a misty skyline in the background is a gem from the past. The tug is no more — records show that it hit a rock and sank in the Cape Cod Canal near Bournedale, Massachusetts, on 29 January 1915. However, tugboats remain pretty much a fixture in New York Harbor. 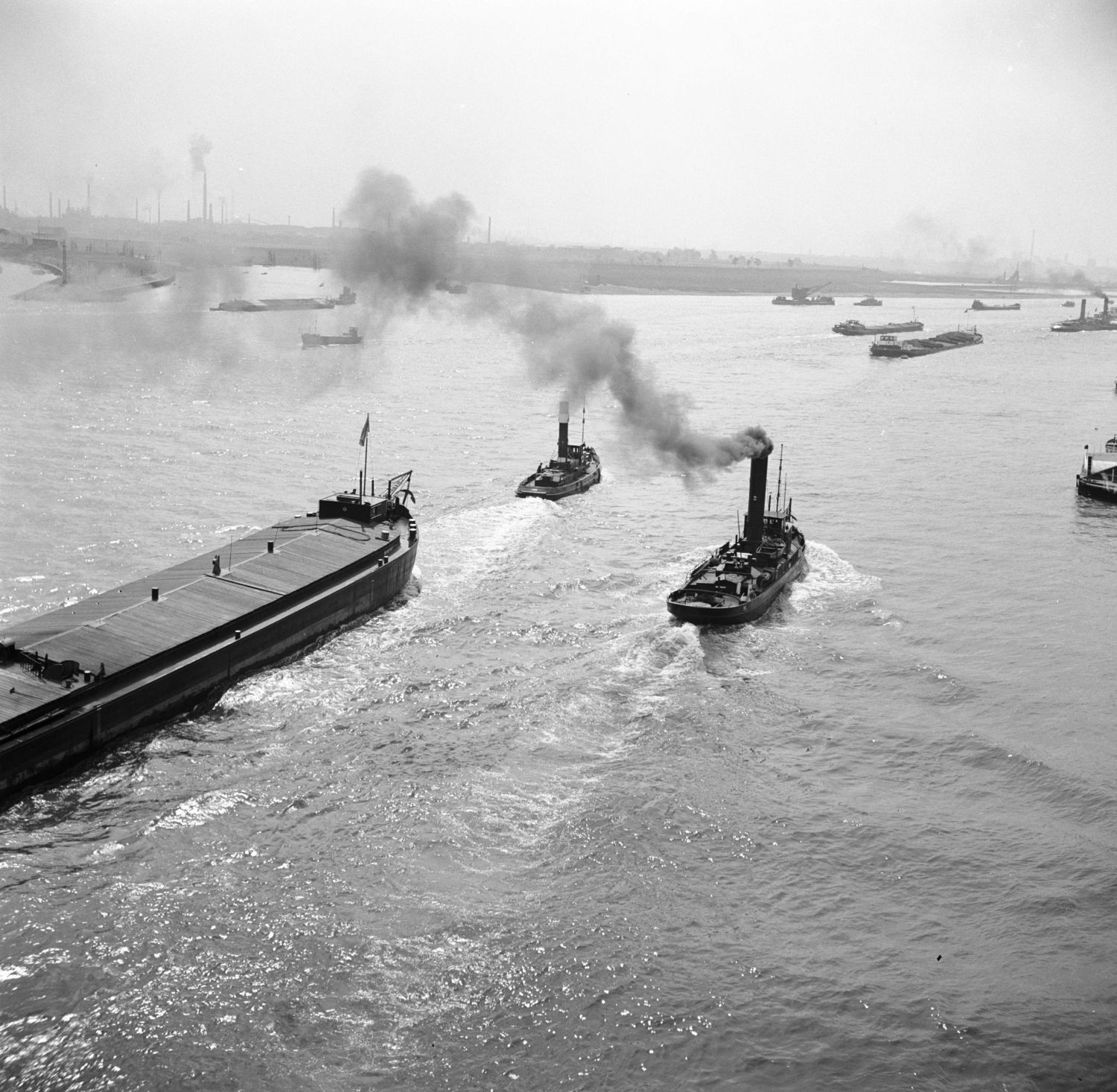 Rhine with barges and tugs seen from the Friedrich-Eber-Brücke (1955)
Willem van de Poll (1895 – 1970), photogrpher
Courtesy of Nationaal Archief (National Archives of the Netherlands)

Shipping traffic on the historic Rhine River has always been busy. This breathtaking photo taken from the Friedrich-Ebert-Brücke bridge in the city of Duisburg, Germany, shows how a small tug can manage to tow a mammoth barge. 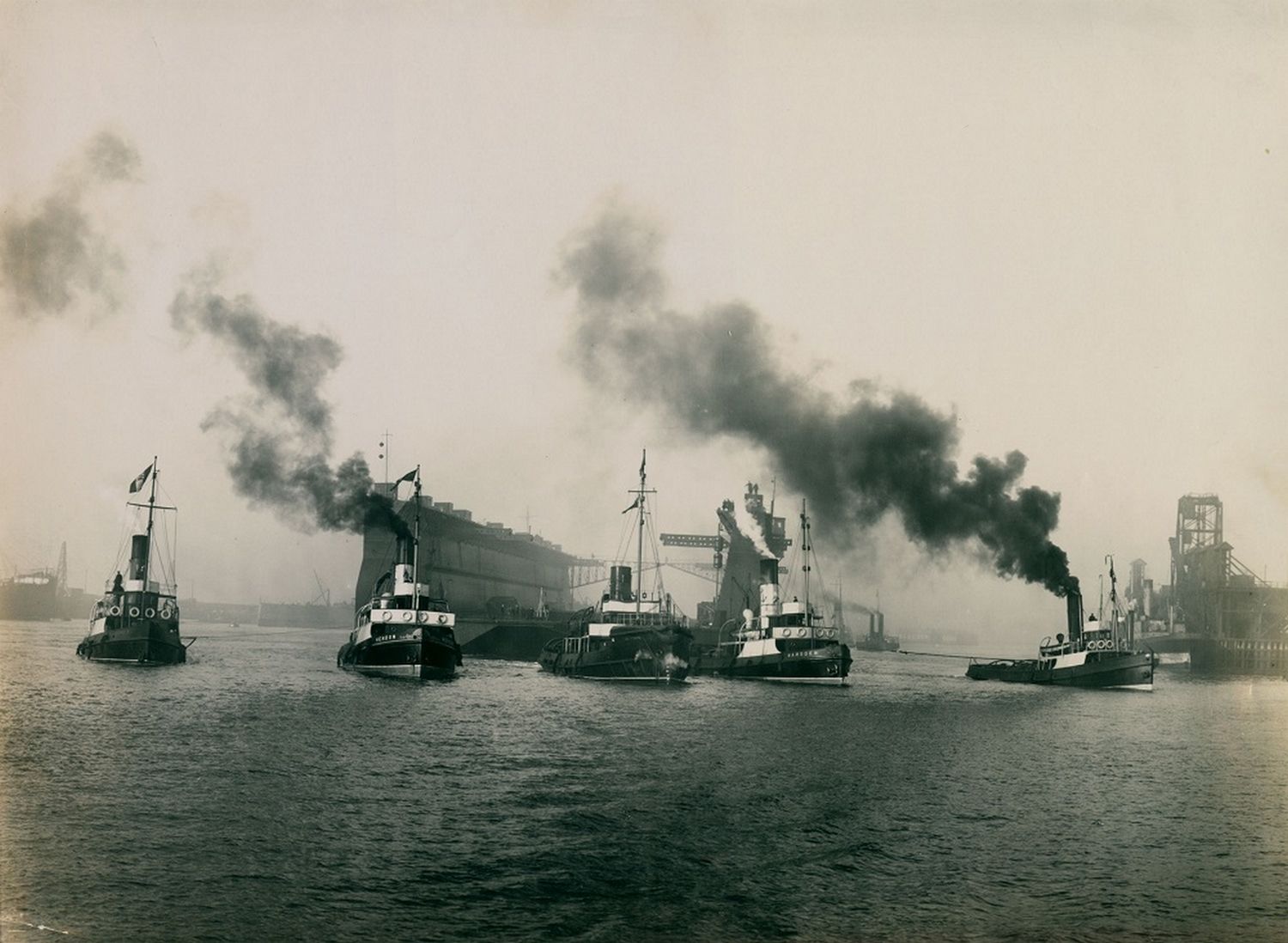 Not surprisingly, it took more than one tug to tow this floating dock on the River Tyne, North East England. A website dedicated to the defunct 1930s magazine, Shipping Wonders of the World, says the 1922-built Southampton Dock had a lifting capacity of 60,000 tonnes. It measured 960 feet long and 170 feet wide (292.6 metres x 51.8 metres). The total floor area was about 3.5 acres (approx. 1.4 hectares). 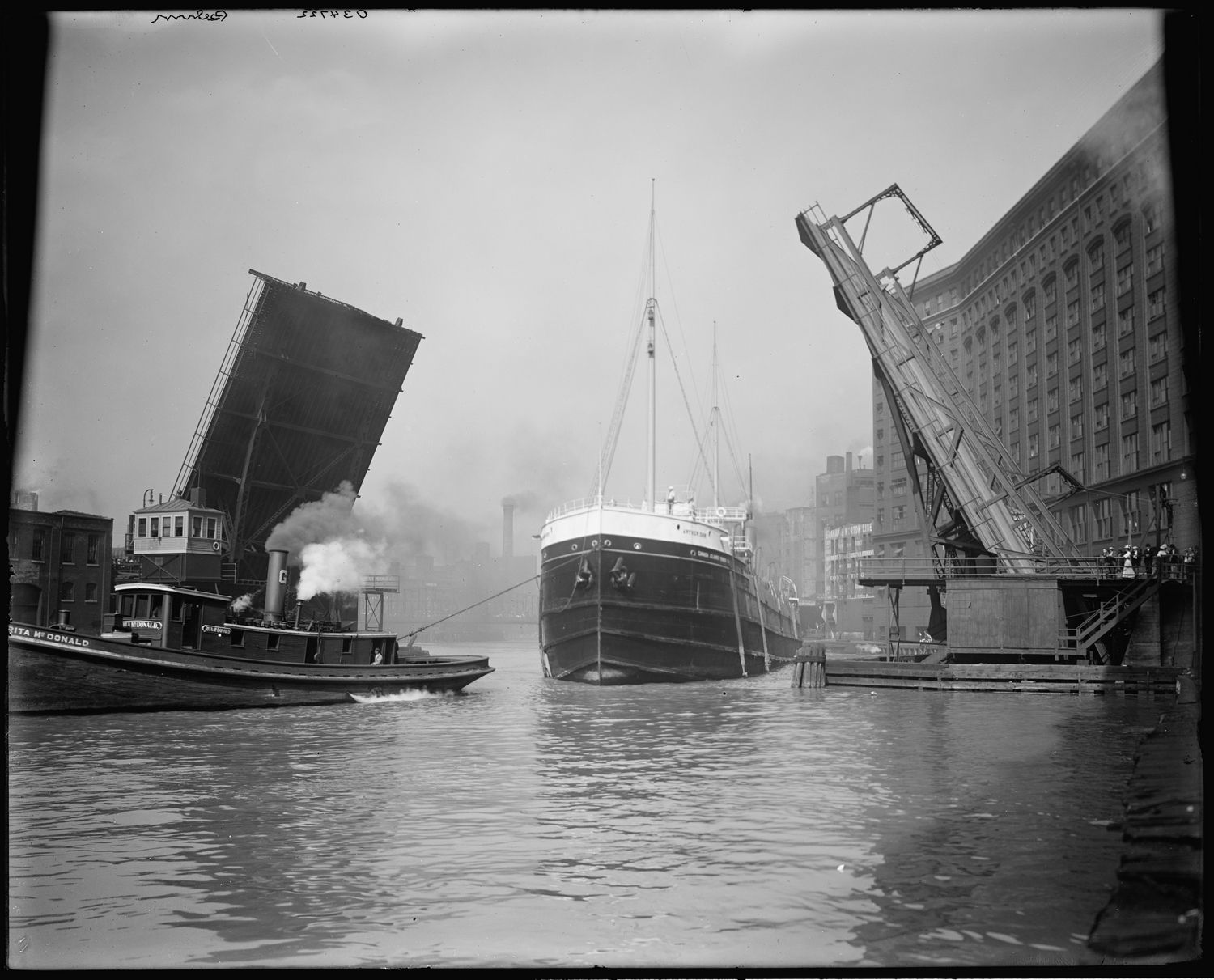 Escorting a large vessel up or down a narrow river is tricky business. The tugboat has to have sufficient bollard pull and a skilled pilot. 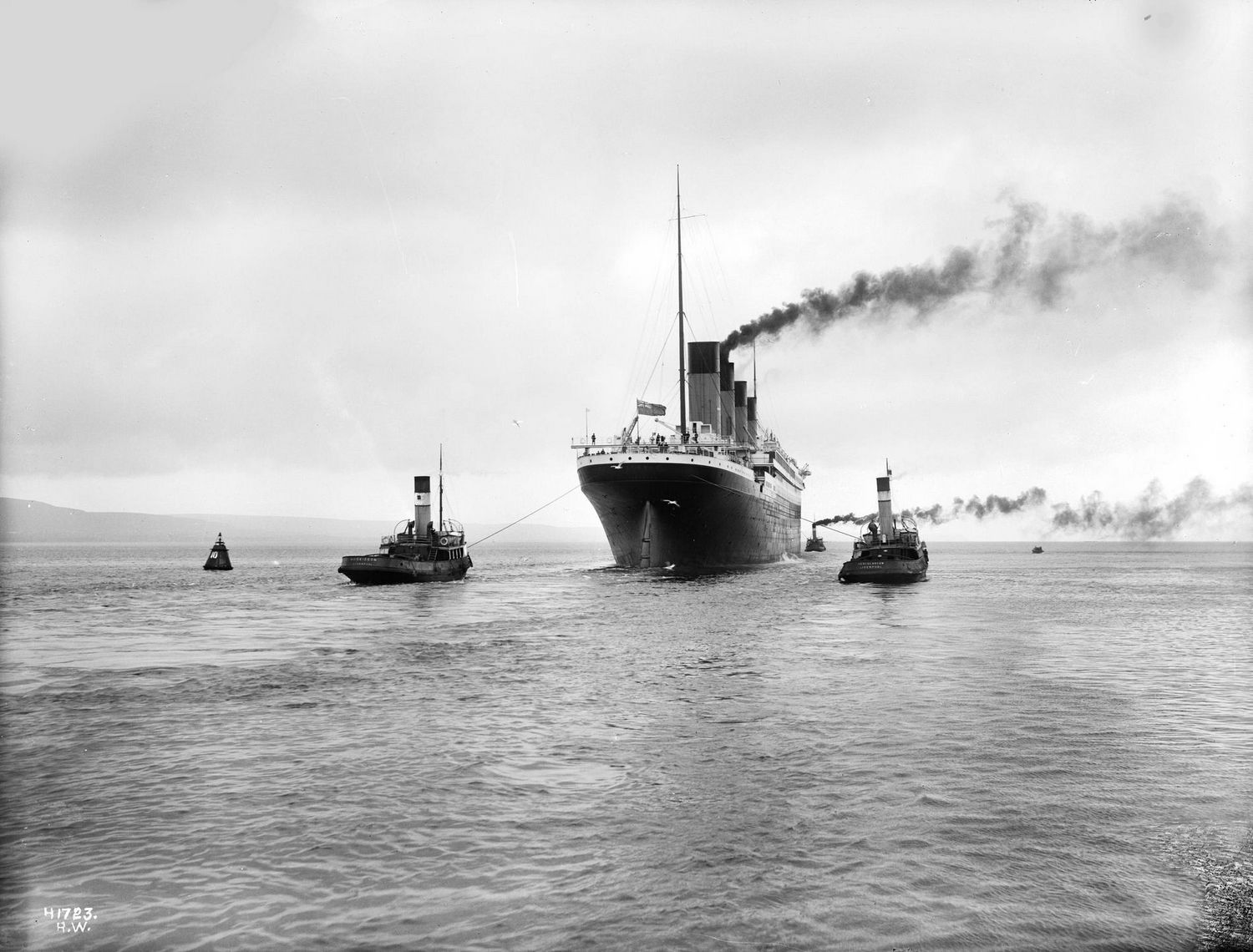 Titanic passing through the Belfast Lough en route to the Irish Sea for her trials (1912)
Robert John Welch (1859-1936), photographer
Courtesy of Wikimedia Commons

Tugboats assisted the RMS Titanic before the start of her sea trials on 2 April 1912. The Titanic has been immortalised in paintings, books and films. Who remembers the names of the tugs that lent her a helping hand? 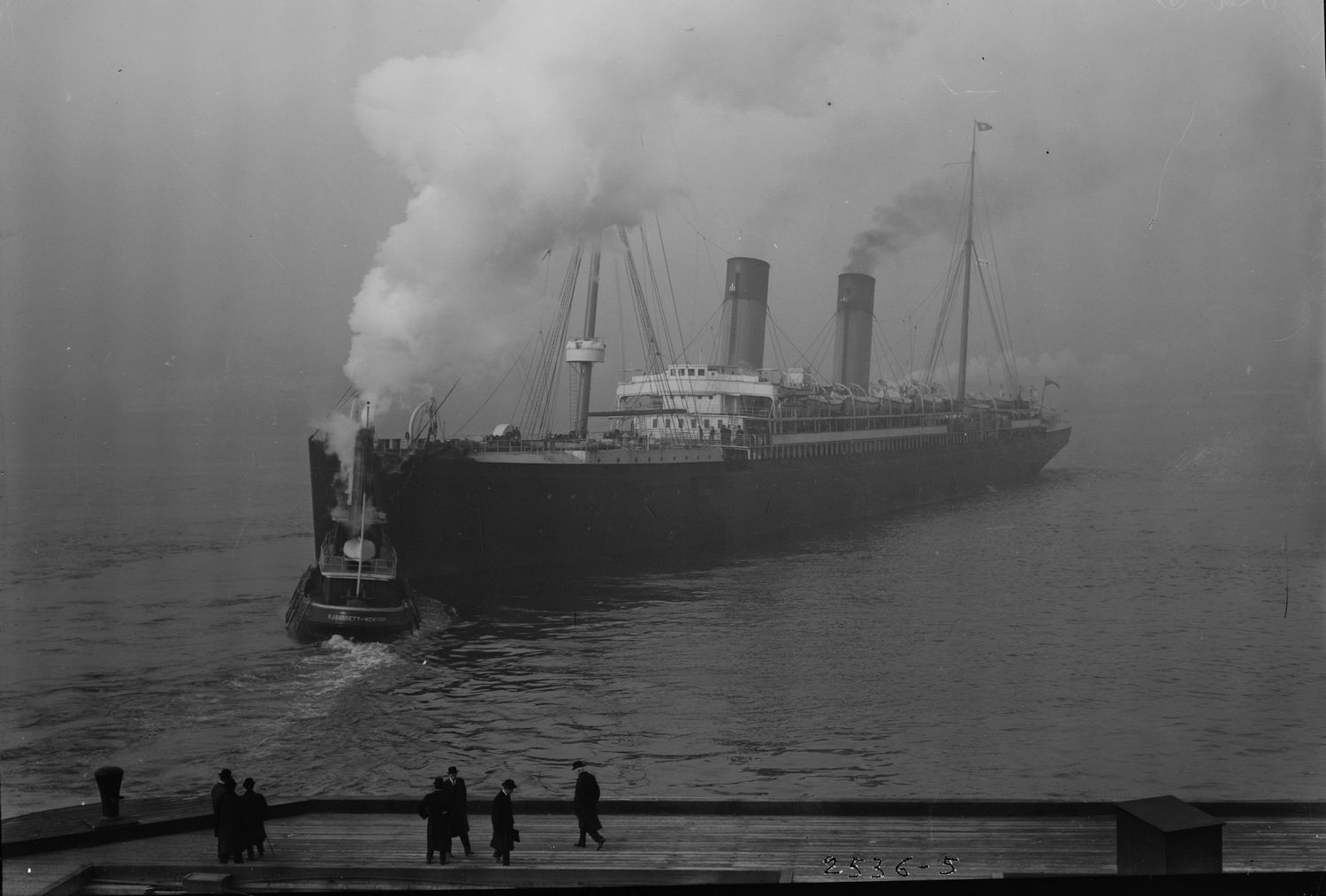 People may look at cruise ships as imposing and even elegant. But these prima donnas of the sea can be rather clumsy, and they usually require tug assistance when docking or undocking. 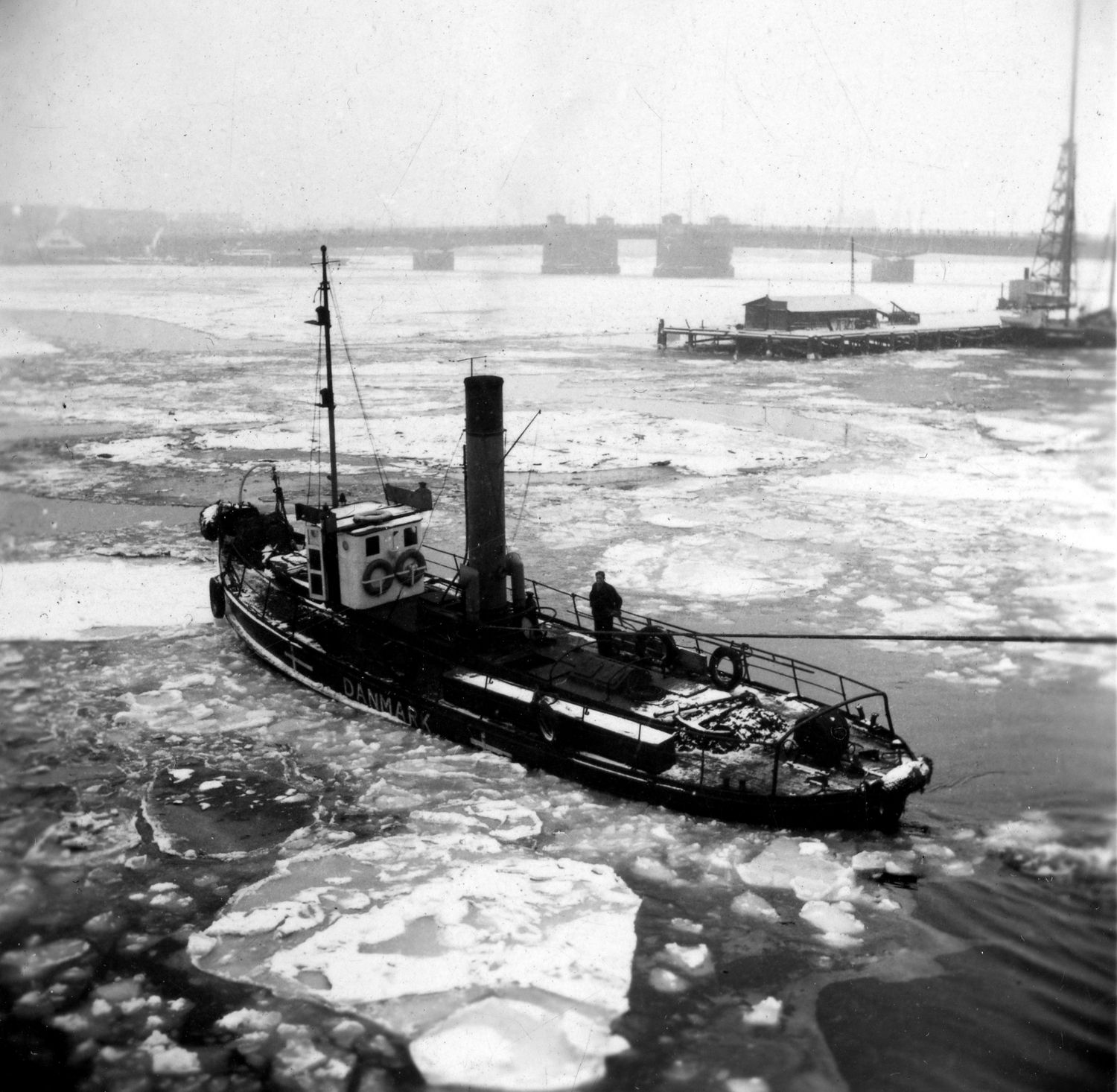 Tugboats are no pushovers (no pun intended). Their grit and tenacity come to the fore in adverse weather conditions. 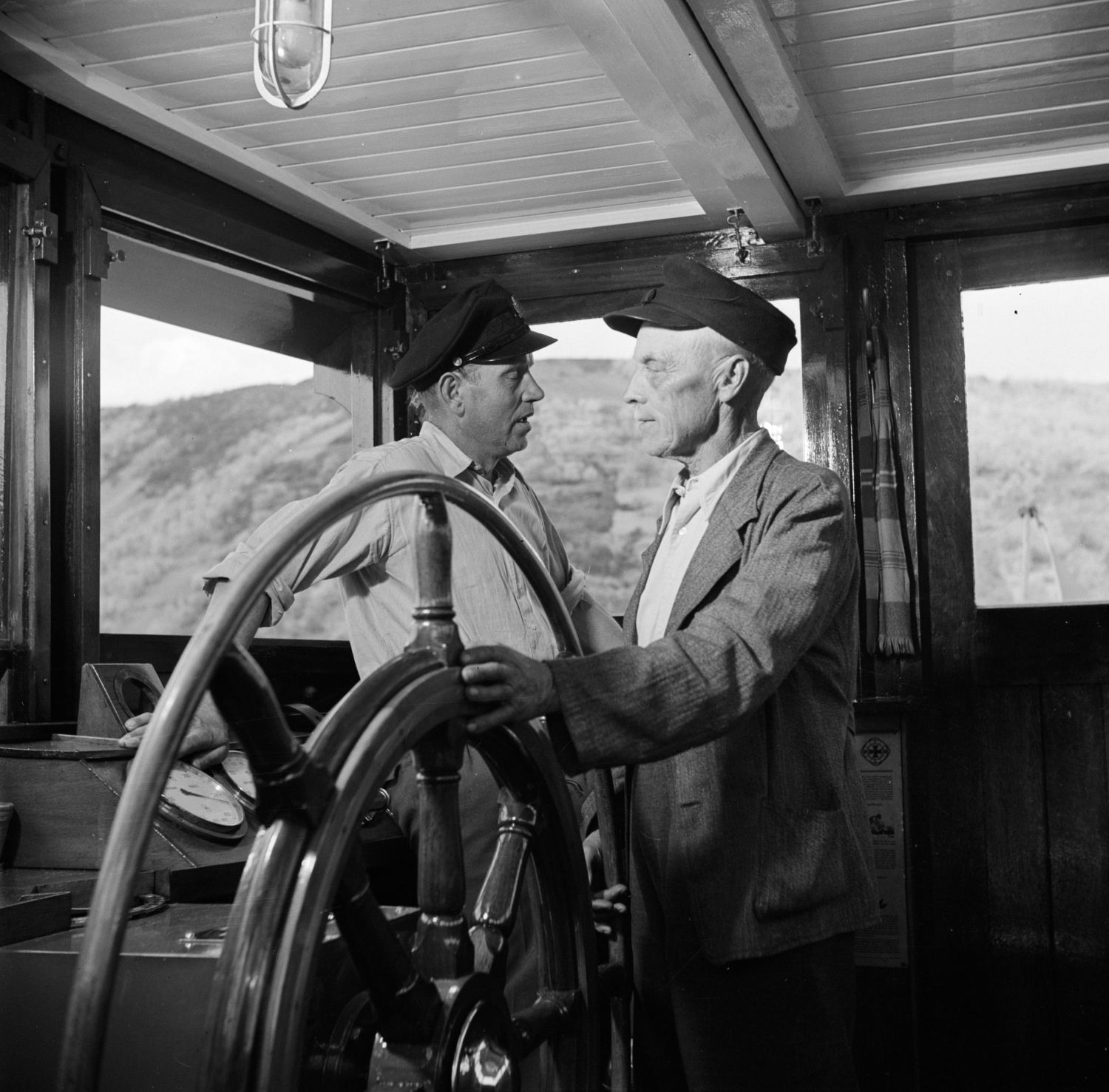 Skipper Anton Rieb and pilot Klöckner at the helm in the wheelhouse of the Damco 9 (1955)
Willem van de Poll (1895 – 1970), photographer
Courtesy of Nationaal Archief (National Archives of the Netherlands)

The men and women who pilot tugboats are rarely in the limelight. The maritime press hardly pays attention to them. Yet, what would shipping be without these hardy spirits? 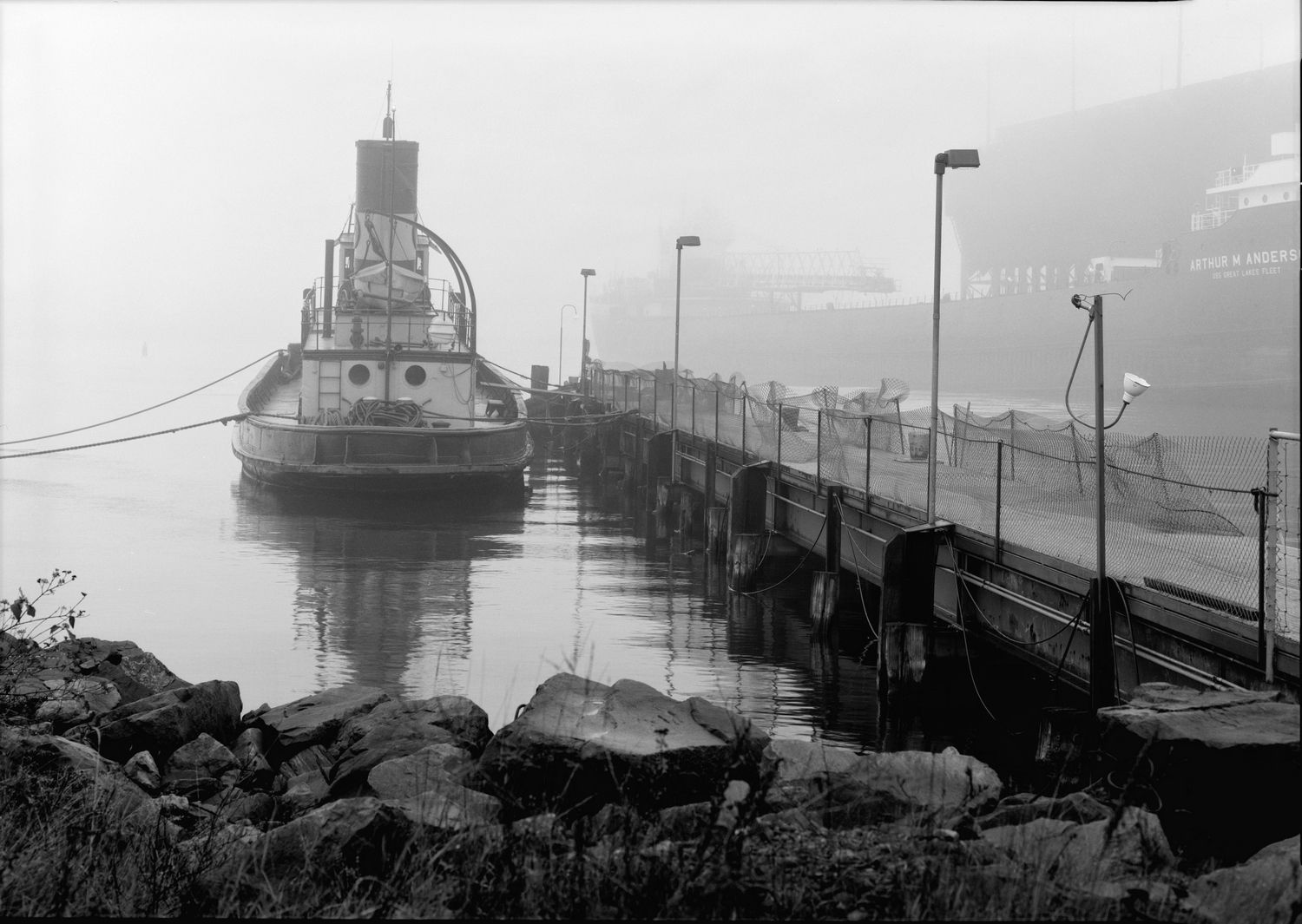 Tugboat Edna G, Agate Bay, Two Harbors, Lake County, Minnesota (before 1968)
Photographer unknown
Courtesy of the Library of Congress
NOTE: This photo may be under copyright. It is published by Marine Cafe Blog under the ‘Fair Use’ principle

Hardworking as they are, there is a time for tugboats to call it quits. According to the Library of Congress, the tugboat Edna G went into retirement in 1981 after transporting ore carriers to the Two Harbors dock from 1896 until that year. It is believed that she was the last steam-powered, coal-burning tug to operate under licence on the Great Lakes.

Power of the small: Tributes in art to tugboats 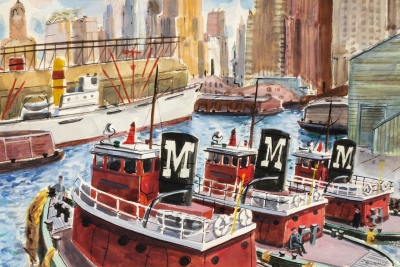