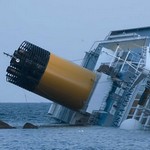 Who wouldn’t be impressed by the Costa Concordia salvage operation? The ‘parbuckling‘ entailed meticulous preparations and took 19 hours. When the 114,137 grt ship was finally righted on Tuesday, 17th September, the press hailed the process as an ‘engineering feat.’ We wonder, though, what the families of the 32 killed in the January 2012 disaster thought of the whole thing. More than US$800 million to pull upright a ship which had been declared a constructive total loss?

Miami-based maritime lawyer Jim Walker made an incisive comment in his wonderfully informative blog, Cruise Law News. ‘It’s a rather amazing thought,’ he wrote, ‘that although Costa (Carnival) offered less than $15,000 per passenger in compensation for the harrowing near-death experience of escaping from a sinking ship and leaving all of your possessions behind, the cruise line and its underwriters committed over $800,000,000 (and counting) to tilt the vessel upright.’

According to a BBC report, the salvage project has so far cost more than 600 million euros ($800m; £500m). The figure is sure to climb higher as more needs to be done before the ship is finally refloated and taken to an Italian port for scrapping. In the meantime, Captain Francesco Schettino, the skipper of the Costa Concordia, is still on trial (he could face up to 20 years for for multiple manslaughter and abandoning ship). Some of the 3,206 passengers are also still fighting for compensation much more than the amounts offered by Costa.

As the drama continues, we wonder: did the salvors and others present observe a moment of silence for the 32 dead just before the parbuckling began? ~Barista Uno

Acknowledgment: The small image of the Costa Concordia was cropped from a photo taken by Roberto Vongher.